Volleyball caps off regular season with sweep at Providence 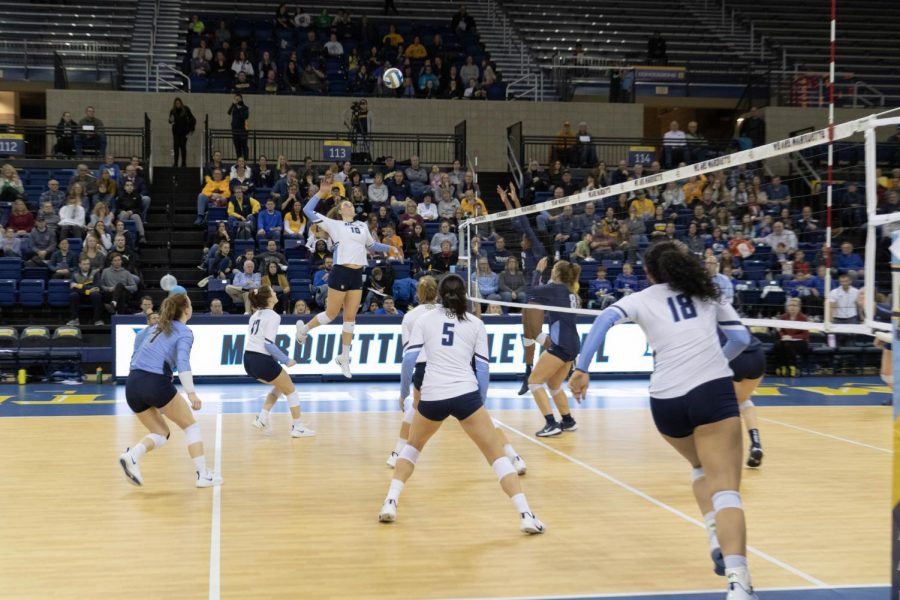 No. 9 Marquette volleyball rebounded after a tough loss to Creighton Friday with a three-set sweep of the Providence Friars (25-9, 28-26, 25-17) in its final regular season match.

With Creighton’s win over DePaul today, Marquette is officially relegated to second place in the BIG EAST regular season standings and will be the No. 2 seed in the BIG EAST Championships Nov. 29-30.

The first set was all Golden Eagles from start to finish, not trailing the entire time and storming their way to a 25-9 victory. All three setters were utilized in the frame, and junior libero Martha Konovodoff totaled eight digs.

Providence nearly stole the second set and made it an even match, but Marquette clawed back from multiple set points to win the frame 28-26. The Golden Eagles hit 0.326 and managed two aces in the frame.

Marquette led for the entirety of the third set and easily secured the 25-17 win.

All available players made an appearance in the match for the Golden Eagles. Junior Kaitlyn Lines and senior Madeline Mosher, who both are recovering from lower body injuries, were not dressed.

Marquette now advances to the BIG EAST Tournament and will face the winner of today’s matchup between Villanova and St. John’s in the conference semifinals at 2:30 p.m. Friday.

This story was written by Dan Avington. He can reached at daniel.avington@marquette.edu and on Twitter @danavington.