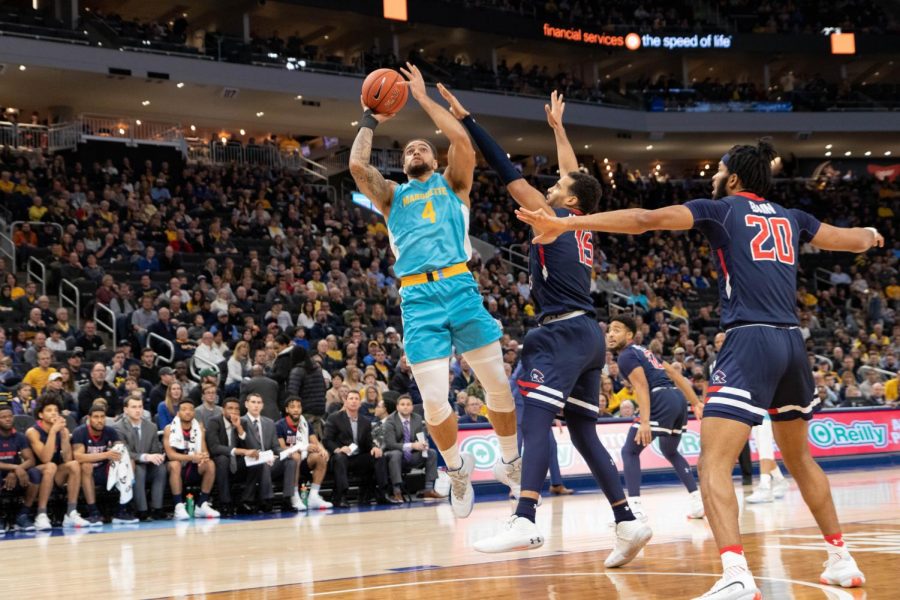 Marquette found a way to come out with the win at Fiserv Forum Saturday against the Robert Morris Colonials 66-62 despite the team’s lowest-scoring first half since 2014.

Robert Morris had a 20-19 lead at halftime after an incredibly unproductive first half for Marquette. The Golden Eagles had 13 turnovers in the half, but Robert Morris struggled to take advantage.

The Colonials only shot 30% from the field with Marquette shooting a little better at 37%. No player for either team had more than six points.

“We were trying to make an effort to get the ball to the bigs,” redshirt senior guard Sacar Anim said. “We were kind of forcing it, and we were being loose with the ball. There are a lot of things that were sloppy that we have to clean up and get back to the fundamentals.”

Marquette scored a season-high 47 points, but the Golden Eagles did not pull away until late in the game. Robert Morris was within three points of Marquette with less than a minute left in the game.

“It was a slip up on our end,” Anim said. “We did a bad job of closing out. They can really shoot the ball, but we have to be way more disciplined.”

A big part of Robert Morris keeping the game close was Marquette’s turnovers. The Golden Eagles turned the ball eight more times in the second half, resulting in 15 Robert Morris points.

Senior guard Markus Howard also struggled to create space, going through the entire first half without a shot attempt. He had two fouls that put him on the bench early along with two turnovers.

Howard finished the day with 11 points, his lowest total scoring output since last season’s game against Seton Hall. He was 2-for-6 from the field and had four turnovers and three assists.

Anim helped fill the void with 14 points on 6-of-10 shooting while also collecting five rebounds.

“I thought Sacar played like a veteran,” head coach Steve Wojciechowski said. “He was huge for us when his backcourt mates didn’t necessarily have the games they’re accustomed to and capable of having.”

“If I compete, then I know my offensive game will come with that,” Anim said. “I put a lot of work in, and my coaches and teammates do a great job of talking to me, giving me the confidence to go out there and do what I do.”

Sophomore forward Brendan Bailey also provided a boost for the Golden Eagles, as he scored 10 points on 4-of-8 shooting while also contributing five rebounds and three assists.

“Brendan has been one of those guys that’s been struggling a little bit, so it’s good to see him get it going,” Anim said. “He was making threes, driving in for dunks, those are electric plays for us that get us going. He played a great game today.”

“Credit to Robert Morris, it wasn’t one of Markus’ or Koby’s finer games,” Wojciechowski said. “We had to figure out other ways to win, we had 21 turnovers and didn’t shoot well and we still won the game. That doesn’t happen very often.”

Marquette improves to 3-1 and looks ahead to their trip to Orlando, Florida, where they will compete in the Orlando Invitational starting Thursday at 5:30 p.m. against Davidson University.