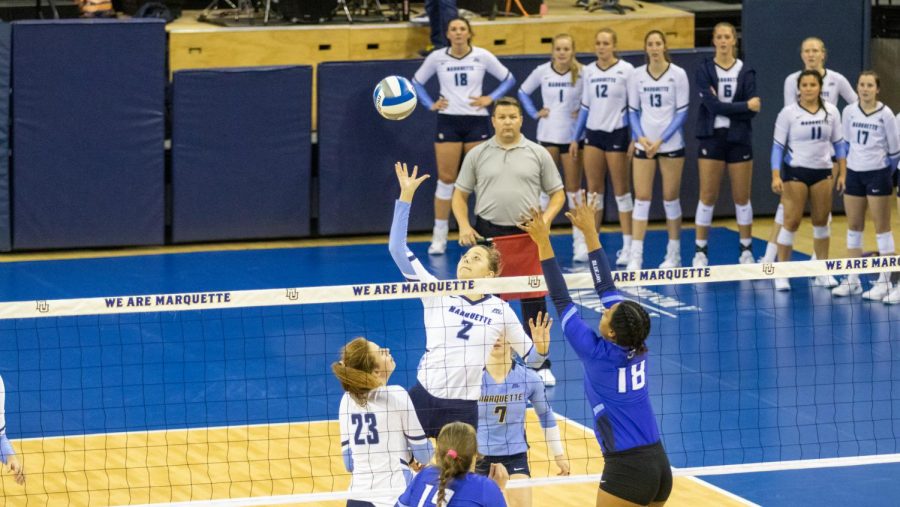 First-year outside hitter Hannah Vanden Berg goes up against the Bluejays in MU's loss Oct. 12 at the Al McGuire Center.

With the win, Creighton locked up the first overall seed in the BIG EAST Tournament next week, meaning Marquette is relegated to the second spot. If Creighton loses to DePaul and Marquette defeats Providence, the teams will share the regular season title.

The first set was back and forth, with six ties and three lead changes coming in the frame. Despite an early Creighton advantage, the Golden Eagles fought back and took the set 25-22, with Allie Barber slamming the set-winning kill after a long rally.

But Creighton stormed right back in the second set, hopping to a 16-10 lead thanks to two 5-0 runs in the frame. The Bluejays held off a late MU run and easily won the set 25-17.

The third was all Creighton early as it went up 14-7, but Marquette utilized a 6-0 scoring run to climb back into the set. The Bluejays turned it around after the MU run and picked up the win 25-19.

In the fourth, the Bluejays used the momentum from the last two sets and cruised to a 25-17 victory, securing at least a share of the BIG EAST regular season title.

Jaela Zimmerman dominated at the net for the Bluejays with a match-high 18 kills, and Keeley Davis added 12. Setter Madelyn Cole had a double-double with 48 assists and 15 digs, middle blocker Megan Ballenger put up 10 blocks and libero Brittany Witt contributed 17 digs.

Marquette (25-4, 15-2) has its final matchup of the regular season Sunday, taking a trip to Rhode Island to face the Providence Friars.

This story was written by Dan Avington. He can reached at daniel.avington@marquette.edu and on Twitter @danavington.