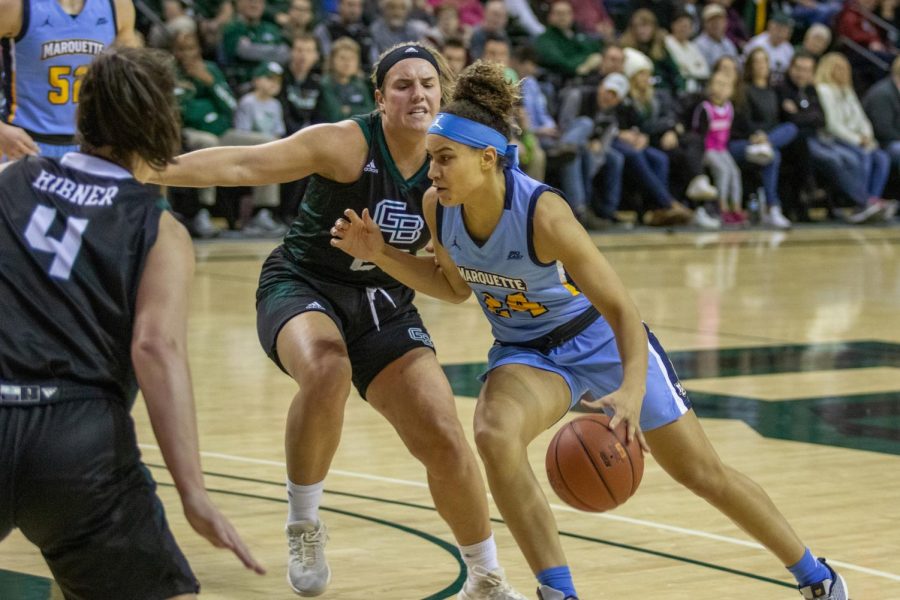 GREEN BAY, Wis. — Following a heartbreaking 64-56 overtime loss to Northwestern last Thursday, Marquette women’s basketball was back in action looking to get back in the win column and for their first road victory.

The Golden Eagles achieved both in a 60-47 win against the University of Wisconsin-Green Bay Phoenix Thursday night.

“Historically it is so hard to win here (at Green Bay) and for our team to come in with poise. … I thought our defense tonight was something special,” head coach Megan Duffy said. “Really proud of how we kept our composure, especially down at the end.”

Unlike their past three games, the Golden Eagles started the first quarter firing, making three out of their first four shots to open with an 8-0 lead. Despite jumping to an early lead, MU could not score in the last 4:03 of the quarter. Marquette’s defense held Green Bay to 15% shooting from the field and finished the quarter with a 13-5 lead.

“Green Bay’s defense makes you think at times there are six or seven defenders out there, so if we move the ball and take any three we can be confident in knocking down, so it was nice to get that early confidence,” Duffy said.

The second quarter saw a different Marquette team, as the Golden Eagles shot just 25% from the field and 0-for-4 from the arc. UWGB finished on a 9-5 run and outscored MU 11-10 in the quarter, but MU still led 23-16 at halftime.

“I think the way they play will make your offense stutter at times, and that is what happened,” Duffy said. “We just had to hang tough.”

MU found an extra spark on offense in the third quarter, making its first five shots, four of which came from beyond the arc. The Golden Eagles shot 58.3% from the field and 71.4% from beyond the arc to build a 43-28 lead into the fourth.

“If you look at the percentages, they might not be great but the timely baskets and that has to fuel your team with confidence,” Duffy said.

For the second straight game, the Golden Eagles found themselves holding their ground in the final minutes as their opponent inched closer. At one point, Green Bay was within nine points of Marquette, but 3-pointers from first-year guard Jordan King and senior guard Isabelle Spingola helped MU cruise to a 60-47 win.

“Told them after the game how proud I was of them. We learned after that Northwestern game,” Duffy said.”This will be a game that we will reference, and keeping that confidence when you have up and down moments.”

Junior forward Selena Lott led the team with 18 points, nine assists, four steals and three rebounds. It was Lott’s first game back after an undisclosed injury sidelined her against Northwestern last Thursday.

“We are such a different team on the experience side of things, the IQ side of things. Really happy with that emotional leadership she brought to us,” Duffy said. “She probably was talking more to her team than I ever have seen from her, and that is the leadership we need when we go on the road.”

Lott, King, and Spingola all combined for 11 3-pointers, a season-high.

“It was huge,” Duffy said. “This is probably the first time this season we were able to execute when it mattered.”

It was the Golden Eagles’ first win at Green Bay since 2007, and for Duffy, it adds extra meaning to their first road win of the season.

“It is really important. Especially at a place like Green Bay, it is just not about a road win but to win here, if you look at their winning percentage at home, it is high,” Duffy said. “It was great to see our team smiling, especially in our juniors and seniors.”

Marquette (4-1) will return to action against Southeastern Conference powerhouse No. 10 Mississippi State at the Al McGuire Center Monday at 7 p.m.

“A chance to play a potential top 10 team and a very strong program and to have it on our home floor is great,” Duffy said. “We always talk about how we want to play the best of the best, and no greater opportunity to bring a really good team into your own home in nonconference to get ready for BIG EAST.”