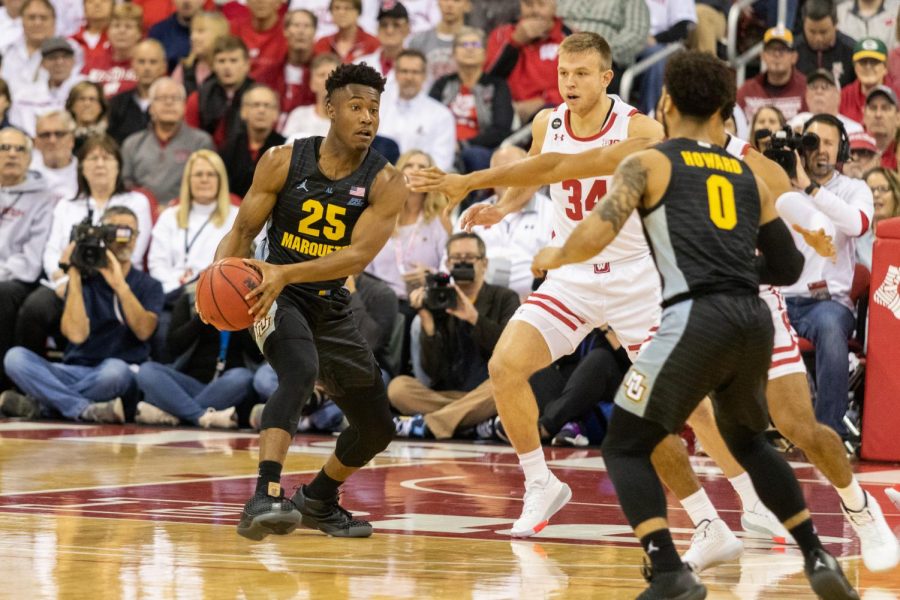 MADISON, Wis. — Marquette’s trip west to its in-state rival Sunday did not go so well, losing 77-61 to the Wisconsin Badgers at the Kohl Center. Here’s a quick breakdown of the loss:

Game MVP: The Badgers’ lone senior, Brevin Pritzl, was one of Wisconsin’s six double-digit scorers and had a team-high of 15 points. He shot 4-for-6 from the field and 3-for-4 from the 3-point line, including a couple threes from the corner that got the Kohl Center crowd on its feet.

In addition to his scoring, the 6-foot-3 guard snagged a game-high 13 rebounds, helping him achieve the first double-double of his career.

“Pritzl really gave us a big spark,” Wisconsin head coach Greg Gard said. “His ability to defend and rebound got him feeling good about himself and then was able to make shots.”

The rest of the team fed off Pritzl’s efforts and energy while also igniting Pritzl, Gard said.

“It’s always good to beat in state teams, especially Marquette,” Pritzl said. “It’s a very big rivalry and it was good to see us come out and execute on everything we needed to.”

Markus Howard went 6-for-12 with 16 points in the first half, but proceeded to go 0-for-9 in the second half with just two points from the free-throw line.
Marquette had 15 turnovers, resulting in 19 Wisconsin points on the other end. Wisconsin had 12 turnovers, but Marquette scored just five of those points.
Koby McEwen led Marquette in points, rebounds and assists with 19 points, seven rebounds and three assists.
Wisconsin outscored Marquette in the paint 24-10, with MU big men Theo John, Ed Morrow and Jayce Johnson, who made his Marquette debut, scoring a combined four points.
At one point, Wisconsin was 7 of 10 from three in the second half. They finished 8-for-14 from three in the half.

This is Marquette’s first loss at the Kohl Center since 2013, as it won the matchups in 2015 and 2017 by the scores of 57-55 and 82-63, respectively. MU also won last year’s matchup against the Badgers in Milwaukee in overtime by a score of 74-69.
This rivalry game came much earlier in the season than normal, as the game is typically held in December. The Big Ten’s expanded conference schedule prompted the schedule move.
Marquette drops to 2-1 this season with the loss and splits their Big Ten week against Purdue and Wisconsin.
Jamal Cain and Greg Elliott had eight and nine points respectively and each had three rebounds.
Pritzl, Davison, D’Mitrik Trice, Aleem Ford, Kobe King and Nate Reuvers all scored in double figures for Wisconsin.

INJURY REPORT: Graduate student Jayce Johnson made his Marquette debut after missing the first two games of the season with a knee sprain. Earlier in the week, Wojciechowski said he thought Johnson would still need a few more weeks before being ready to play.

NEXT UP: After the loss in this rivalry matchup, Marquette looks ahead to its next game against Robert Morris on Saturday at Fiserv Forum at 1 p.m.

“Obviously we’re disappointed,” Wojciechowski said. “We’re a work in progress, we have a lot of work to do, that’s obvious now to everyone. We’ll get to work.”