SCHABLIN: Colin Kaepernick deserves to be in NFL 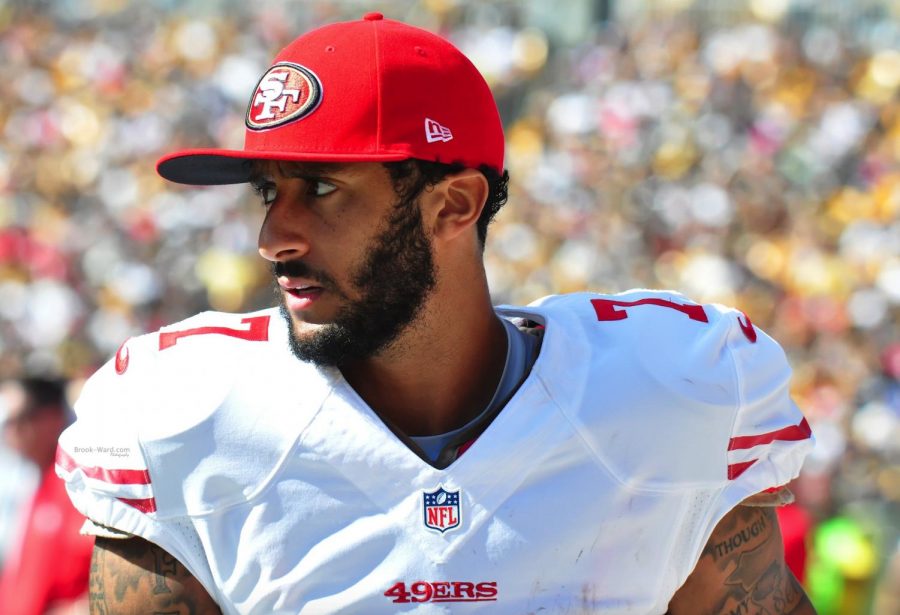 Colin Kaepernick was a quarterback on the San Francisco 49ers from 2011 to 2016. Photo via Flickr.

He’s has been out of the NFL for three years, not due to a lack of skill, but rather the controversy that surrounds him. Former San Fransisco 49ers quarterback Colin Kaepernick, who started a protest that involved kneeling during the national anthem before sports games, held a workout last Saturday with representatives from 24 NFL teams in an attempt to reenter the league. The workout was held to show off Kaepernick’s ability to still play after he opted out of his contract to become a free agent. No teams signed him and it is believed that his protest played a major role in his current status.

In reality, Kaepernick had to change the workout venue, resulting in only seven teams being able to attend due to transparency reasons with the NFL. Many of the teams such as the Lions, Titans and Jets included were currently looking for a new starting or backup quarterback, the position Kaepernick plays. The workout went relatively well, an NFL unknown executive said to NFL insider Adam Schefter, stating that Kaepernick’s arm strength was “elite.”

There are 32 teams in the NFL, and all have roughly three quarterbacks, so if Kaepernick is good enough to be at least a back-up, he should be on a team.

Team owners didn’t want to take on the baggage of having him kneel during the national anthem, the NFL’s fans, at least the most vocal ones, have made it clear that they find kneeling during the national anthem is unpatriotic as standing is traditional. Even at the workout, there were protesters against Kaepernick, who wrote on signs “Stand up for the flag” and “Colin Kaepernick, un-American loser, get out of my town.”

Kaepernick will still probably not end up on a team, at least for now. With the NFL’s roster deadline closing at the end of the month and a draft within the next six months, Kaepernick will probably have to wait another year to get onto a roster. Even though he definitely still has the ability to play at the professional level.

But that is assuming the teams will ignore the controversies around him, which they won’t as most of the same team owners who rejected him before are still in their same position. If Kaepernick came back, he would likely not get supported by fans who found his protest un-American and disrespectful to the flag.

The problem lies in that the criticism of Kaepernick’s actions is often due to beliefs about his protest from information heard through media that reinforces bias, such as the President who used Kaepernick’s protest as a talking point in rallies to gain more support from supporters. Kaepernick’s protest was not meant to disrespect the inanimate object that is the flag, nor did he mean to upset or disrespect the military, a common misbelief among critics. In fact, he designed the protest with former Green Beret Nate Boyer as a way to protest while still maintaining some respect for the anthem.

The protest was a peaceful way to raise awareness of the racism still present in the United States,  among his teammates to utilize the platform he had.

When asked why he helped Kaepernick, Boyer said, “I was showing that I support his right to do that, I support the message behind what he’s demonstrating for. I’m also standing with pride because I feel differently in a lot of ways, too. But there’s nothing wrong with feeling differently and believing different things. We can still work together to make this place better.”

Many of the people opposing Kaepernick state they want to keep sports and politics separate, however, this is in no way a new event. Using the platform of sports to protest racial injustice has been around since the civil rights movement. After Tommie Smith and John Carlos won gold and bronze in the 200-meter race for the US at the 1968 Olympics, they saw their platform as an opportunity creating the iconic image of them raising their gloved fists in the air to support black power while the US national anthem played in the background. Both Smith and Carlos were praised for their actions, yet Kaepernick’s protest could be seen as a variation of this.

Smith and Carlos won medals at an Olympic event whereas Kaepernick brought a team to a super bowl one year. Smith and Carlos went on to have great careers, with both eventually being drafted into the NFL. Kaepernick, on the other hand, was basically blacklisted from the NFL after his protest. Both Smith and Carlos and Kaepernick had the talent to succeed in their careers, yet the effects of their protests just depended on the time and environment. Sadly it seems that we are moving backward.

Kaepernick’s protest was blown out of proportion, and his original message and purpose have been shifted. Just because a protest makes people uncomfortable doesn’t mean that a man should be shunned from a game that he loves and that needs him. Kaepernick is good enough to be at least a backup quarterback, if not a starter. All he needs is just one more opportunity.