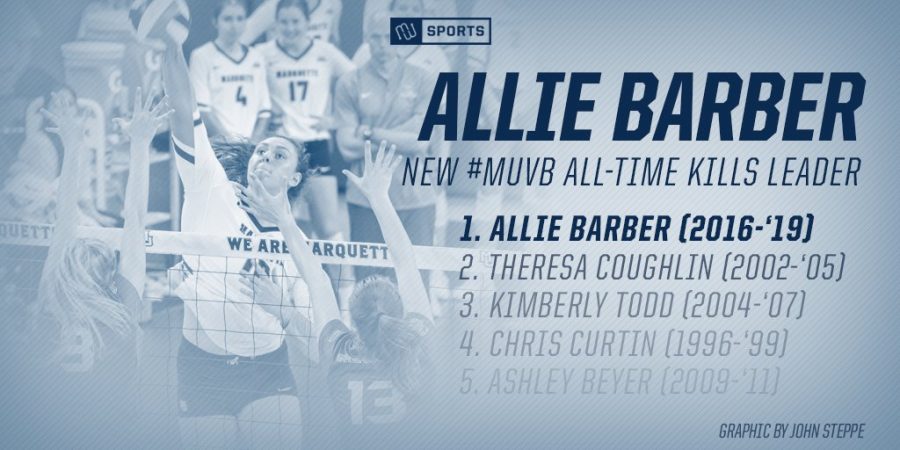 For the first time since 2005, Marquette volleyball has a new all-time kills leader: Allie Barber.

“It was just a really exciting moment,” Barber said. “My teammates were obviously all here cheering for me, and we knew leading up to this week I was one kill away. It was just really special moment that I got to share with my teammates.”

“The former record holder emailed me this week and gave a really nice note about the success of the team and the program,” head coach Ryan Theis said. “I responded … ‘I know it’s bittersweet for (you),’ but the record couldn’t have been broken by a better person.”

After the 6-foot-5 outside hitter broke the record, she received a standing ovation from the crowd at the Al McGuire Center.

“There’s nothing like it,” Barber said. “Being at home (and) being able to break that record is really cool.”

Besides her 22 kills, Barber totaled five digs, two blocks and one service ace.

“She made a couple of really smart decisions,” Theis said. “She turned a couple down the line off the top of hands. I thought she moved it around pretty well.”

It was all Marquette in the opening frame. The Golden Eagles claimed an early 12-5 lead and held the Hoyas to just 11 total points in the first set. MU was hitting a match-best .444 clip in the first with 15 kills, compared to Georgetown’s five.

“Everyone out there was swinging really well tonight,” Barber said. “The setters were putting us in great positions, our defense was digging a ton, it just made it easier for the hitters.”

The momentum shifted in the second set as the Hoyas jumped to their biggest lead of the night at 18-12. Marquette couldn’t recover and dropped its first set to a BIG EAST opponent since Oct. 25.

“They brought their toughest game against us,” Barber said. “They started serving really hard, their hitters were connecting and they made us work for it.”

Georgetown was hitting a combined .378 clip, its best of the night in the second.

“Their left sides, at the timeout, I think had four kills each,” Theis said. “One was four for five, one was four for eight, and we weren’t even giving a lot of points away, they were just killing it. We should have played a little better defense, but I give some credit to them.”

The third set resembled the first, as Marquette had a quick 7-2 advantage and never relinquished that lead. The largest advantage for the Golden Eagles was at 22-13, eventually finishing off the frame at 25-14.

There were nine ties and two lead changes in the fourth set, but Marquette built a 21-16 lead and never looked back.

“We made a little bit of an adjustment after the outsides got hot,” Theis said. “(Elissa) Barbosa got hot a little bit there, she was four for five. She rotated in the back row, and we stopped her some there — that was a pretty pivotal point.”

Junior Kaitlyn Lines has not played with the team since Oct. 2. She posted on her Instagram story Thursday a picture tagged at Aurora Sinai Medical Center that said “new cartilage, new me.” Theis said there is no timetable for Lines’ return.

“What happened was they came in chunks,” Theis said regarding the service errors. “Two in a row twice, then all the sudden you get to four fast.”

“We’ll have our hands full,” Theis said. “They’re going to slow it down in the middle — that’s tough to stop. They’ve got a right side who played great last weekend, a new player. We don’t know the lineup because they move it around so much, so we’ll have to figure it out as we go.”