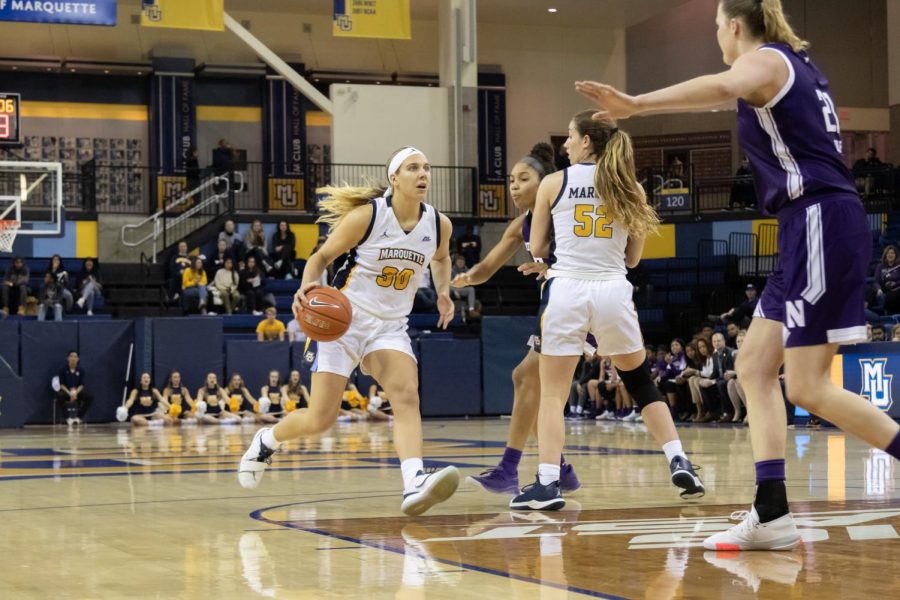 Marquette women’s basketball dropped its first match of the season 64-56 in an overtime battle against the Northwestern Wildcats Thursday night, falling to 3-1 this season.

“Obviously a disappointing loss,” head coach Megan Duffy said. “I thought we had the momentum late in the game and had a couple of opportunities down the stretch to win.”

MU struggled early to sustain anything offensively. The Golden Eagles shot just 29% from the field in the first half and trailed by eight at halftime.

Redshirt junior Lauren Van Kleunen and Spingola led the way for MU with 18 points each. Spingola shot 6-for-12 from beyond the arc and 6-for-14 overall. Van Kleunen shot 47% from the field.

“Trying to take the positives out of (the game),” Duffy said. “We did so many good things. … I’m really proud of this team for hanging in there and (we’re) really, really close to being a quality team.”

“The opportunity to play good teams like this in non-conference games is going to be really huge for us down the road,” King said. “Even when things weren’t going our way in the first half, I think our team really stepped up, and we made the extra effort.”

Sophomore guard Lindsey Pulliam tallied a team-high 18 points for Northwestern on 6-for-18 shooting.

“I feel like I’ve watched (Pulliam) since she was 12,” Duffy said. “She stepped up at the end. … That’s what great players do. I think at some point eventually, she’ll be a pro.”

As a team, the Wildcats shot 37% from the field.

Junior guard Selena Lott did not play in tonight’s game due to an undisclosed injury she suffered against Illinois State. Duffy said she is considered day-to-day.

“(Lott) is a huge, huge reason why we have a chance to be a good team,” Duffy said. “She has a presence about her. There’s a bigger picture in all of this, so as much as it’s disappointing not to have her, she’ll be ready to go hopefully pretty soon.”

Marquette takes on UW-Green Bay in its first road game of the season Tuesday at 7 p.m.

“We’ve been lucky to be at home in the lovely confines of the (Al McGuire Center),” Duffy said. “You got to go on the road and test yourself. No better way than to go to Green Bay.”