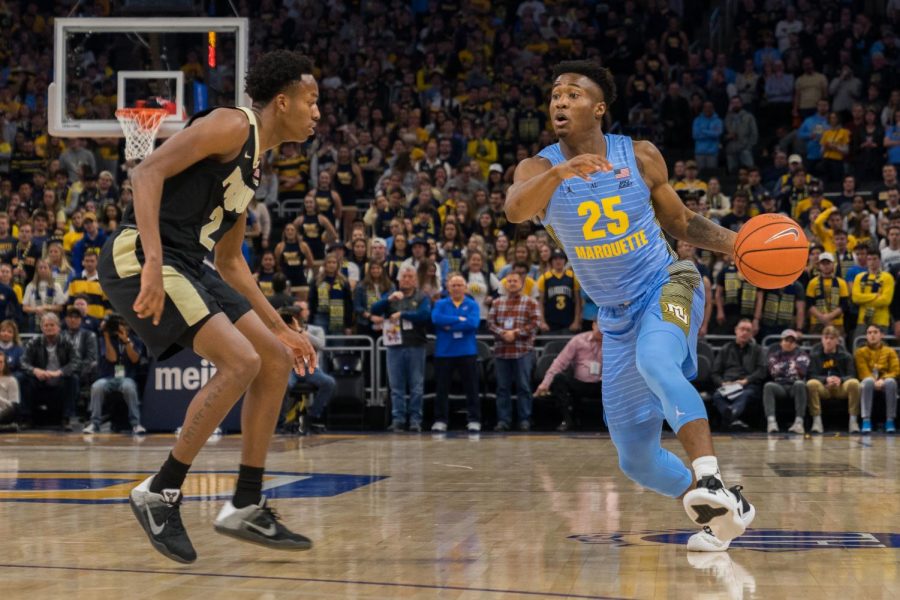 The Golden Eagles came back to pick up a big nonconference win at home on Wednesday night against the Purdue Boilermakers. Here is the breakdown of the big victory:

“After the first half, one of the things we asked Koby to do was to be more aggressive,” Marquette head coach Steve Wojciechowski said. “We need him, and he can score, and him being aggressive will open things up for other guys.”

McEwen also added five rebounds and four assists to his scoring to complement Markus Howard, who had 18 points and three assists.

“I was trying to be more aggressive, trying to get into the paint,” McEwen said. “We need to be balanced, all the guys have to contribute, it can’t just be Markus shooting and the rest of us just watching.”

MU shot 48% from the field and 38.5% from three in the second half, compared to 38.5% and 28% in the first.
Purdue’s starting backcourt of Eric Hunter Jr. and Jahaad Proctor shot 7 of 24.
Purdue shot 9 of 21 from the free-throw line as a team.
Theo John led all players with nine rebounds, edging Purdue’s 7-foot-3 Matt Haarms out by one.

Markus Howard became the program’s first 2,000-point scorer with an and-one 3-pointer at the 8:05 mark in the first half.

This is Marquette’s first ever win against Purdue. MU was previously 0-9 against the program with its last loss coming in the 2017-’18 season.

Marquette trailed for most of the game until Koby McEwen hit a three with 4:43 left.

Purdue’s Aaron Wheeler, who had six points, seven rebounds, and five assists, fouled out with 4:26 remaining.

Marquette improves to 2-0 on the season, while Purdue falls to 1-2 with their first loss against Texas at home.

“We blew the game,” Purdue head coach Matt Painter said. “We were physically tougher than Marquette in the first half, and in the second half it flipped, they had more energy.”

Up next: Marquette has another Big Ten opponent soon as they will travel to Madison on Sunday for a matchup against rival Wisconsin Badgers.