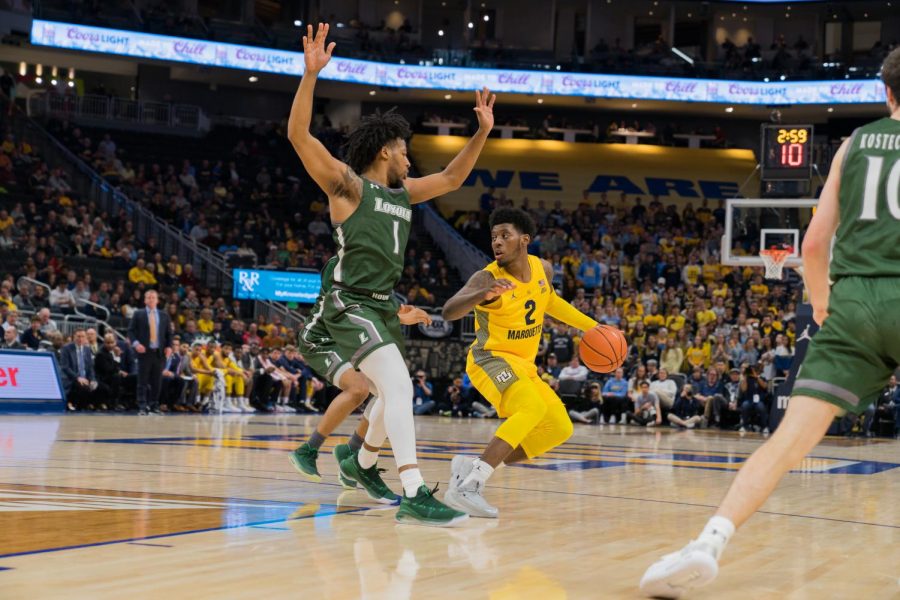 Marquette will face its first tough test of the season, going up against the Purdue Boilermakers Wednesday night.

“We’ll be challenged in every way,” Wojciechowski said. “They’re an outstanding team, coach Painter does an incredible job, we’ll really have to be locked in on both ends.”

One of the challenges Purdue will bring is in the form of 7-foot-3 junior Matt Haarms. Haarms averaged 9.4 points, 5.4 rebounds and 2.1 blocks per game last season on 63.2% shooting.

Wojciechowski said 6-foot-7 redshirt senior Ed Morrow and 6-foot-9 junior Theo John will have to play with intelligence and not pick up cheap fouls against him.

“I’ve played guys bigger than him, it’s nothing different,” Morrow said. “We’ve been stressing defense in practice, we just need to stick to what we do, that’s the number one thing.”

Wojciehowski said Haarms makes it very difficult to score at the rim as he can move his feet well on the perimeter for his size. Offensively, Wojciechowski said he’s a big target on the block and tough to guard.

Purdue began the season ranked No. 23 in the AP Poll, but after a week where they beat University of Wisconsin-Green Bay and lost at home to University of Texas, they are now unranked.

Marquette is coming off a week break after defeating University of Loyola-Maryland 88-53 Nov. 5.

Despite both teams being unranked, Marquette received 67 votes to be in the latest AP Top 25 poll, with Purdue receiving 21.

Morrow said he thinks this game is exciting for the fans, the program and the team, and they want these types of games early to help the team grow.

He added one of the biggest things to worry about in college basketball is a team coming off of a loss, as Purdue will be more hungry.

This matchup will be part of the annual Gavitt Tipoff Games, an eight-game series between the Big Ten and BIG EAST conferences, which is typically most teams’ first or second game of the season. Wojciechowski said it will be a test for Marquette to see who they are and where their flaws are.

“One of the benefits of playing a game this early is if you have flaws or a weakness, it will be exposed,” Wojciehowski said. “They’re a typical Purdue team, hard nosed defensively, and they don’t beat themselves, we’re going to get their best effort.”