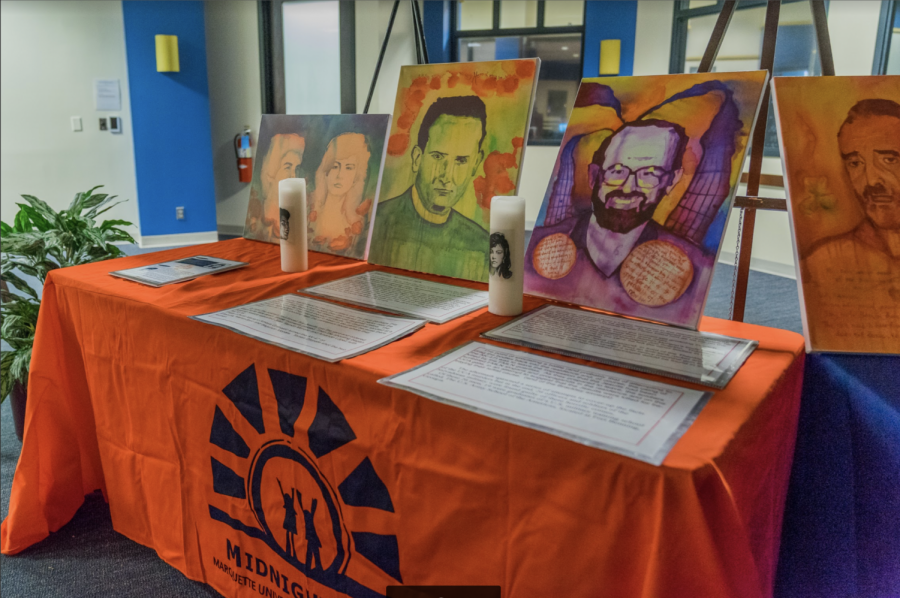 Marquette University held its yearly vigil Monday to honor six Jesuit priests who were killed Nov. 16, 1989, by the Salvadoran Military at the University of Central America in El Salvador.

The priests were killed because they spoke out against the government and advocated for the poor.

The event, put on by Campus Ministry, included a gallery in Alumni Memorial Union 157 where individuals could learn about the events through text, images and paintings.

Ann Mulgrew, assistant director for campus ministry, said the event is intended to shed awareness on martyrs and to honor them in remembrance. She also said their stories can apply to the sacrifices that modern Jesuits make today.

“If these people can say and do what they did, then what little I have to sacrifice is definitely worth it,” Mulgrew said.

She added that vigils honoring these martyrs have been in tradition for more than seventeen years, and they are being practiced at most Catholic schools. Mulgrew said it is important to continue traditions that honor the dead, and remind people emphasizing how their memory inspires others with their defense of the cause they believed in.

“I think it’s important for students to know who our heroes are in the Jesuit community, and I think students can relate to an injustice where people are killed or murdered for what they believe in,” Mulgrew said.

Mulgrew said she believes students can connect to the Jesuit martyrs in ways that are applicable to today. She said it is important to take risks when it is for something one believes in, and feels that it is an important message for students to learn.

Morgan Frank, a junior in the College of Education and assistant to the liturgical director for Campus Ministry, said she attended the vigil because she just happened to be in the area. Nevertheless, she said she was happy that she stopped by and took the time to learn about these priests who sacrificed so much for what they believed was right.

Frank said she had heard about the martyrs but didn’t know their story, and she found that going to the vigil and getting the chance to learn about them was great for her.

“I knew very little about the story but by walking through and reading about these priests I was able to learn a lot,” Frank said.

“You might have to make some sacrifices, but in your heart, you will know you are doing what is right and that is what is important,” Frank said.

Griffin Knipp, assistant director of Campus Ministry for social justice and community outreach, said Marquette’s commemoration of the martyrs was followed by a vigil for Deferred Action for Childhood Arrivals recipients.

Knipp said the priests are remembered for their courage in standing up for what they believed in, and as the 30th anniversary of their death approaches, he felt it was important Marquette acknowledged that DACA is going in front of the U.S. Supreme Court this week as well.

“So our hope is to look at the example of these martyrs, and to think about what that would look like in our own context, so we have tied these two prayers together today so that Marquette University can also be a witness to those on the margins and be prophetic in our support for Dreamers,” Knipp said in an email.

Knipp said over the past several years, Marquette has actively lobbied to support the Development, Relief and Education for Alien Minors Act and bipartisan Bar Removal of Individuals who Dream and Grow our Economy Act.

The DREAM Act was a bill in Congress that would have granted legal status to certain undocumented immigrants in the United States who were brought to the U.S. as children and then were schooled here. Several versions have been introduced to Congress since 2001, but none have passed, according to the Anti-Defamation League.

The BRIDGE Act was introduced in 2017 with the intent to allow people who are eligible for or who have received work authorization and temporary relief from deportation through DACA to live in the U.S. with permission from the federal government, according to the National Immigration Law Center.

Knipp added that Marquette’s leaders have publicly addressed the campus community in letters written both in English and Spanish in support of our students affected by DACA legislation, and Marquette annually celebrates the resilience and accomplishments of its undocumented/DACA students with the Dreamers Gala.