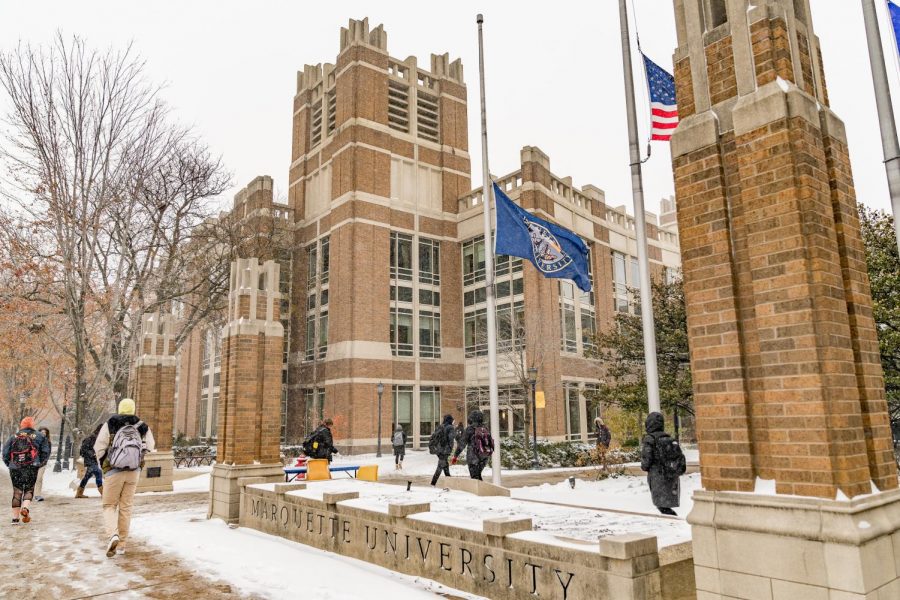 Marquette University announced it would be making changes to its spring COVID-19 prevention and mitigation plans. Marquette Wire stock photo

When Monica Dreesen, a junior in the College of Arts & Sciences, woke up on Halloween morning, she didn’t think to look out the window.

It was only after her roommate told her it had snowed that Dreesen made the decision to break out her winter coat and boots.

Because Dreesen is from San Antonio, Texas, she said she wasn’t prepared for her first Wisconsin winter when she first arrived on campus in fall 2017.

“I had to buy a pair of snow boots January of 2019 because I didn’t have any freshman year,” she said. The junior said she tried out her hiking boots, combat boots and rain boots before giving in and purchasing boots built for snowy weather.

After Dreesen bought her first pair of boots, she experienced her first winter wipeout.

“I had to cross 12th Street and they never cleared it, but there were footprints I was trying to follow. … I was wearing my new winter boots and I was like, ‘Oh I am prepared for this,’ and I put my foot down and I fell with my backpack on. … I rolled myself over and laid there for 15 seconds,” Dreesen said.

Despite how tough winter can be, Dreesen said she recalls her joy during the first snowfall of her freshman year, as it was her first time seeing snow since she was 10 years old. Dreesen said she was so excited that she took her time walking to class.

Kevin O’Reilly, a junior in the College of Health Sciences and San Francisco native, said winters where he is from consist of temperatures in the low 40s, which only necessitate a mere sweatshirt. He said he knew the weather in Milwaukee was going to be different than he was used to — but he could not have imagined the full extent of Wisconsin winters.

“I knew there was different weather. I just didn’t know how cold it got,” O’Reilly said.

He said he would call winter in Milwaukee “bone-chilling cold.” O’Reilly said he remembers living in Straz Tower and being late for a chemistry lecture in November 2017. He decided to grab a banana from the cafeteria to eat on his way to class, and as he was walking, his hand started freezing.

After this encounter with the cold, O’Reilly said he decided he had to change how he operated, specifically when it came to clothing.

“You need boots, warm socks, you need some sort of headgear and make sure to get a nice down jacket and then layer up with a sweatshirt,” he said. “Just make sure you have enough layers.”

This year, O’Reilly said he was shocked that it snowed so early in the season.

“The temperature dropped pretty quick, and then all of a sudden I saw a snowflake on my (weather) app, and it said it was going to snow overnight. Then all of the sudden the snow just kept coming,” O’Reilly said.

For many students born and raised in the Midwest, winter extremes are not shocking or uncommon occurrences.

Wisconsin native Clarice Michalski, a junior in the College of Health Sciences, said the Halloween snowfall was not surprising. She said she simply thought “Mother Nature got real spooky this season.”

Michalski had a different childhood winter experience than Dreesen and O’Reilly. She specifically remembered a time in fifth grade when school was cancelled for a snow day.

“I couldn’t open the door unless we shoveled it out because it was completely covered,” Michalski said.

Michalski’s best advice for surviving the winter is to get a scraper for your car and to not be afraid to wear heavy-duty winter gear.

“Don’t go the whole winter with tennis shoes because my friends have done that before, and I don’t recommend it,” Michalski said. “I feel like people get embarrassed to wear big coats sometimes, but I’m just like, ‘Go for it.'”