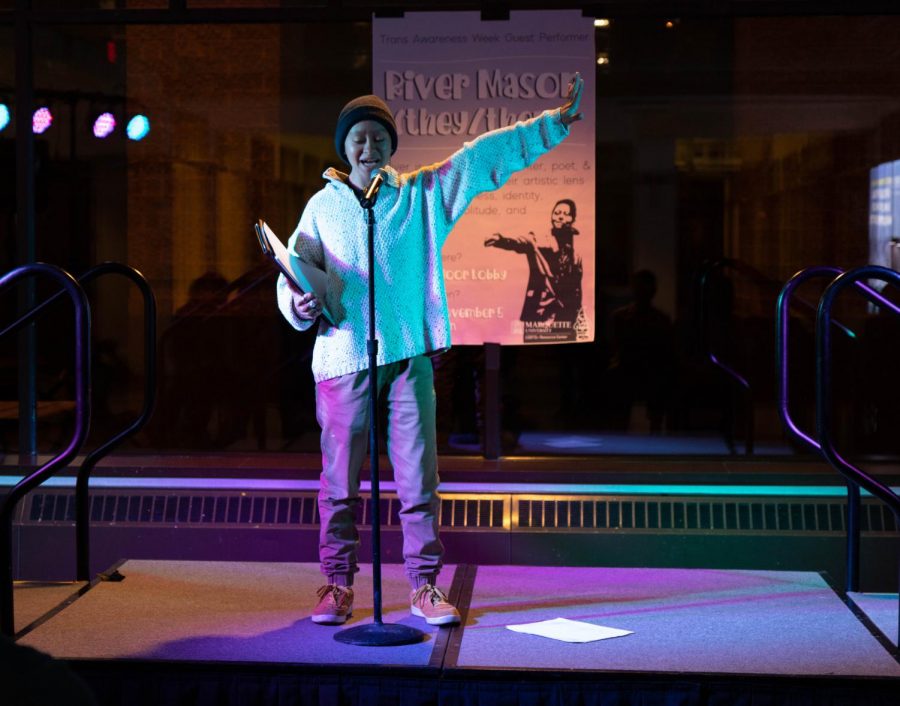 River Mason is a queer Latinx poet that graduated from Temple University.

Mason is a poet featured on SlamFind, an online platform for spoken word poetry. They are an alum of Babel Poetry Collective, which is part of Temple University and is composed of poets, singers and musicians, according to its website.

Some of the poems featured topics such as queerness, identity, social justice, solitude and mental health.

“We don’t get a lot of speakers like this at Marquette. This kind of representation is important,” Areli Herrera, a junior in the College of Education who attended, said.

The event was sponsored by The Office of Engagement and Inclusion.

Nationally, Transgender Awareness Week is held the second week of November, leading up to Transgender Day of Remembrance, which is a day to honor transgender individuals who have been killed as a result of transphobia, according to Glaad.

Glaad is a media organization that works to create cultural change. Many of their stories promote LGBTQ acceptance, according to its website.

There will be a learning session in the AMU to talk about domestic violence awareness and prevention in the LGBTQ community Nov. 12, Perdomo said.

Additionally, there will be an interactive Transgender Day of Remembrance event Nov. 20 in the AMU, aimed to raise awareness of the violence surrounding transgender women of color in particular, Perdomo said.

Cory Forbes, a freshman in the College of Arts & Sciences, said he attended Mason’s poetry performance because he heard it was an interesting event for Transgender Awareness Month.

“I think it is important that Marquette shows … the importance of queer students and queer poetry and art and literature,” Forbes said.

At the performance, Mason talked about the meaning behind their poems and the overall writing process in between reading pieces.

Herrara said Mason’s commentary was one of her favorite parts about the performance because she enjoyed hearing about their life and what inspired them to write poems. She also said having that dialogue with the audience made it more engaging.

Forbes said he could not choose a favorite poem at the performance, but the dialogue in between was one of his favorite parts as well.

Perdomo said the OEI wanted to book someone to come and speak at Marquette for Transgender Awareness Week, but they were not sure exactly what they wanted.

Eventually, the office found Mason’s booking agent, and they thought Mason would be a good fit because of the topics they cover, such as mental health, social justice and what healthy and unhealthy LGBTQ relationships look like, Perdomo said.

Mason is a college student at Temple University, so Perdomo said she thought it was a good opportunity for students to relate and resonate with their work.

“Having speakers like this just makes it that much clearer that marginalized communities can be seen here because sometimes when you are a minority on campus … you can feel marginalized by administration and event programming,” Herrera said.