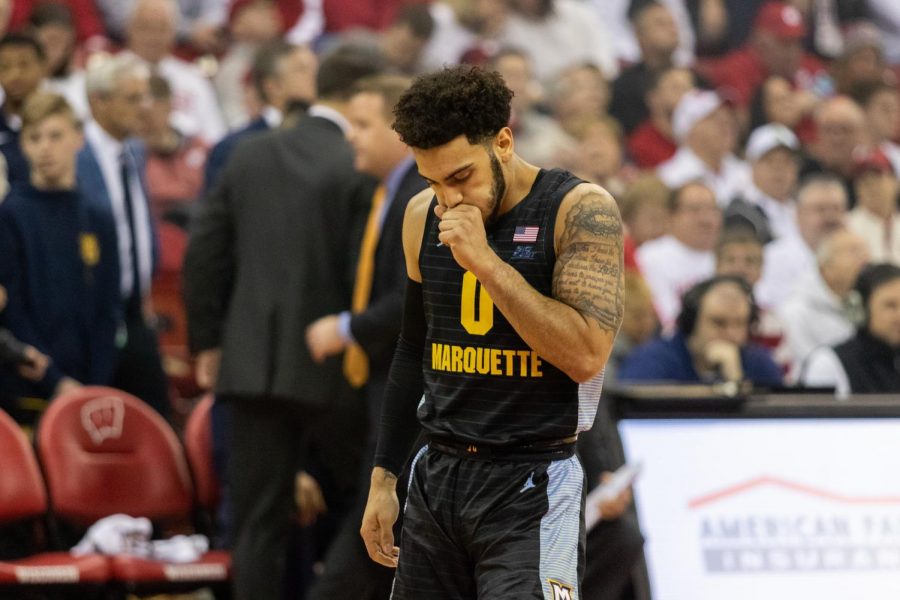 After senior guard Markus Howard became all-time leading scorer for Marquette men’s basketball in the team’s home opener Tuesday, there was only one name he thought of.

“First and foremost, it wouldn’t be possible without God,” Howard said. “(I’m) so thankful for all that he’s blessed me with.”

This is not his only public profession of faith. It is also portrayed in his number, his tattoos, the service he’s done and his founding of the Fellowship of Christian Athletes at Marquette.

There’s a reason the 2019 BIG EAST Player of the Year chose to wear the number zero.

“I chose zero because I wanted it to stand for ‘Without God, I am nothing,’” Howard said.

The outward vocation of faith is not an unknown concept for Howard. Ever since he was little, Howard said his parents reinforced the importance of faith by going to weekly service.

The Chandler, Arizona, native really started putting faith at the forefront of his life when he was 10 years old. Two of his four tattoos are Bible verses: Jeremiah 29:11 and Philippians 4:13.

The tattoo on his left bicep reads a verse from Jeremiah 29:11, “For I know the plans I have for you, declares the Lord, plans to prosper you and not to harm you, plans to give you hope and a future.”

The other tattoo, on his left wrist, is a verse from Philippians 4:13, “I can do all things through Christ who strengthens me.”

“It’s definitely been the thing that I value in my life,” Howard said. “It kind of flows down to everything else I do in my life, too.”

Howard’s pregame routine includes reading a Scripture and praying during the national anthem. His teammates have noticed how dedicated Howard is to his faith on a daily basis.

“He always puts his faith in God,” redshirt senior Sacar Anim said. “That’s one thing he’s definitely taught me, just how to continue to have faith in God, whatever the circumstances.”

Although Howard isn’t able to attend church every Sunday due to his responsibilities as a student-athlete, Fellowship of Christian Athletes has filled that void for him.

“Church can be classified as many different things,” Howard said. “Your own interpretation of church is what makes it special and makes it that kind of a relationship for you. … Being able to have other people around campus who I can bond with through my relationship with Christ has been cool.”

The idea of FCA came to Howard after going on a service trip to Costa Rica two summers ago with other student-athletes. The group helped build a basketball court for the community.

“I was leading Bible studies just for the athletes, but then the village started to see it and get interested in it,” Howard said. “It got to the point where I was giving messages to an entire village while on the trip. In seeing that and seeing the effect God had on that place really grew in my heart to where I wanted to start something on campus.”

Following that trip, Howard met with 2019 graduate and men’s lacrosse midfielder Nick Singleton as well as academic adviser Katie Simon to talk about starting the FCA chapter at Marquette.

The process included meeting with a local representative, reaching out to teams, choosing a location and promoting themselves on social media.

“Going out and trying to get people interested in the concept of coming to something that’s new … at Marquette is really cool,” Howard said. “Anybody that can be touched by God through anything that we’re doing is something we really look forward to.”

Because Singleton has already graduated, Howard now leads with men’s lacrosse midfielder Jordan Schmid. He said he wanted to help lead FCA because of his unique walk in his faith over the past five years.

“As I’ve matured, I’ve learned that the more you share your story, the more other people learn because you learn that people have gone through the same things that you have,” Schmid said.

Each week on either Wednesday or Thursday, Howard and Schmid meet to choose themes student-athletes can relate to, like God’s purpose or God’s goal. The duo plans what to focus on during meetings, but are willing to take requests from others.

“We try to always give input to other student-athletes to see what they’re going through and give them a voice, so we can actually talk on things that are happening in their lives,” Howard said.

FCA’s structure is very similar from week to week. The meeting starts out with members sharing, if they are comfortable, their “peak of the week,” which could be as simple as doing well in a game or race or having a pleasant talk with family.

Introductions for new attendees come next. Additionally, they always play a game that emphasizes teamwork and bonding between the athletes; for example, Nov. 3 they played Pictionary.

Toward the end of meetings, Howard said he always tries to read a passage from the Bible, and the group always concludes with holding hands for a prayer.

“We usually always like to bring food catered in or a snack or something to get everyone excited to come,” Howard said. “We like this to be relaxed and a comfortable environment for people to take a break from studying and the stresses from their regular day-to-day lives.”

Men’s lacrosse sophomore attackman Holden Patterson originally joined FCA because of how it resembles Young Life, a nationwide religious organization that is directed toward athletes. He has attended the group since its start last year.

“I’d say this is my favorite part of the week,” Patterson said. “Just through the people in it that have helped me, especially with Jordan Schmid and Markus Howard and all the other people, they’ve really helped me develop my faith throughout the last year.”

Howard, Schmid and Patterson all said FCA has helped them connect and bond with athletes from other sports over their love of God.

“Being in a sport in college is so tough because so much of your time is spent in that sport and around your teammates, which is great … but I think it’s important too to branch yourself out and meet different athletes in different sports,” Howard said. “You want to be sure that you’re trying to expand your horizons in terms of who you’re meeting on a college campus.”

All three said the growth of FCA just over the past year has been tremendous. Howard said the first couple of meetings brought in about five people, and now they’re up to 20-30 people.

“Every week we get a new person,” Schmid said. “We’re not exclusive to just athletes. If we could make this a campus-wide thing, we’d do it. … We are who we are because we have a relationship with Jesus, and we’re not afraid to show that.”

Howard said student-athletes from across the country have contacted him about how to start a group like this at their own schools.

“It’s been cool that our platform has been seen, and it’s been a template or a model for other schools across the country,” Howard said.

Part of being that model is making sure the meetings aren’t “too predictable.” Howard said FCA attempts to bring in one or two guest speakers per month to provide different voices and perspectives.

“They all come from different walks of life, different backgrounds, so hearing their perspective on their faith is just something that we really appreciate,” Schmid said. “You learn something new from every single person.”

Men’s basketball associate head coach Stan Johnson was the guest speaker Nov. 3. Howard said Johnson has influenced him in more ways than just basketball — especially through religion. Johnson introduced Howard to Greg Washington, who was the lead pastor of the church next to Straz Tower, now called Restoration Church.

“As a man of God, (Johnson’s) been such a big influence,” Howard said. “One of the first things I questioned when coming to school was, ‘Where am I going to go to church?’ The first week I got here, he was the person who took me to church with him.”

Besides connecting Howard with Washington, Johnson has been crucial to Howard’s growth on and off the court.

“I’m so blessed to have someone like him in my life,” Howard said.

During Johnson’s talk, he discussed the importance of purpose in life.

“Finding your purpose allows people to do less in life by focusing on what matters the most,” Johnson said. “To discover your purpose in life, you must turn to God’s word, not the world’s wisdom. … If you understand that all of us, our purpose on this Earth is to serve God, all the things we want and desire will come through that.”

After Johnson’s speech at the meeting, Howard reflected on what he feels is his own purpose.

“Part of my purpose is to help people through the game, but also help them bring themselves to God. In my life, God’s given me so much,” Howard said. “For me to fulfill my purpose, I feel to use basketball as a vehicle to bring people closer to God is definitely what I think I’m on this Earth to do.”

Head coach Steve Wojciechowski said at the team’s media day he wants Howard to leave a legacy beyond his scoring output on the court.

“The thing I’ll remember and appreciate the most about Markus … is he embodies the total person of what I want, while I’m at Marquette, our players to be like,” Wojciechowski said. “He’s an outstanding student, he’s engaged in the community, he uses his platform to make our community better and he represents himself on the basketball court as a player in the finest possible manner.”

In terms of future goals for FCA, Howard said he wants it to be an organization that will last far beyond his graduation and “continue to grow and grow as the years go on.”

“It’s definitely something that I truly care about,” Howard said. “Having FCA has been probably one of the things I’m most proud of in my entire life, not just for basketball.”