Volleyball sweeps DePaul in first half of back-to-back 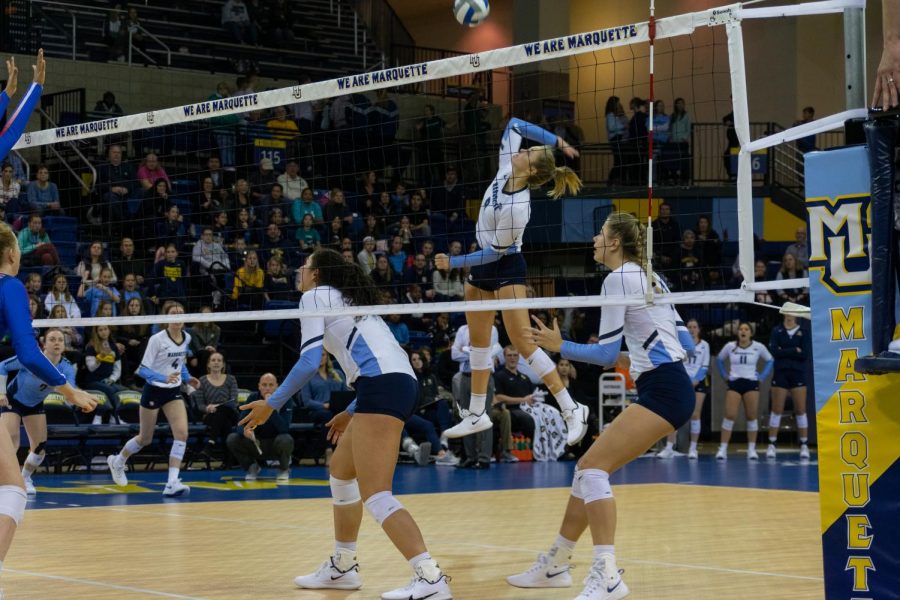 Junior outside hitter Hope Werch takes a swing against DePaul in Marquette's three-set win at the Al McGuire Center Nov. 8.

It was the Golden Eagles’ seventh straight BIG EAST win since the Oct. 12 five-set loss to the Creighton Bluejays.

Marquette had a rough start in the first set, going down 7-3 and needing an early timeout. But MU fought back and tied the match at 12-12.

There were eight ties and two lead changes throughout the rest of the set, but Marquette finally pulled away and took the set 25-23 despite DePaul’s .533 hitting percentage in the frame.

“We needed five aces to get the first,” head coach Ryan Theis said. “We have to play better defense.”

The second set was just as close as the first, with four lead changes and six ties, but Marquette gained momentum at the end and easily won the frame 25-18.

The third set was all MU from the start, with the Golden Eagles grabbing an early lead and winning 25-17. With a comfortable lead, a couple seniors swapped positions. Outside hitter Allie Barber got to set, and setter Lauren Speckman got to take swings.

“For three years, (Speckman and Barber) have been the heart and soul of this team,” Theis said. “Speck is every day at practice talking about hitting … and Allie’s actually a pretty good setter. I told them they could have one try, and they took advantage of it. … They have begged for that for a long time.”

Barber led the way with 11 kills on a .375 hitting percentage. She is second on Marquette’s all-time kills list and is now 12 away from tying Theresa Coughlin’s record.

As a squad, Marquette totaled 15 service aces in the match, compared to just one for DePaul on the day.

“We serve it pretty good at home,” Theis said. “If we can get on some passers early and get their confidence rattled, (that’s important). We were able to get enough pressure and get some aces.”

Marquette (22-3, 12-1 BIG EAST) will now travel to Chicago to take on the Blue Demons again. The matchup will take place at Wintrust Arena Saturday at 6 p.m.

“We’re going to have our hands full tomorrow,” Theis said. “DePaul outhit us tonight, and we’ve got to play a little better defensively. I expect they’ll come out blazing tomorrow at home.”