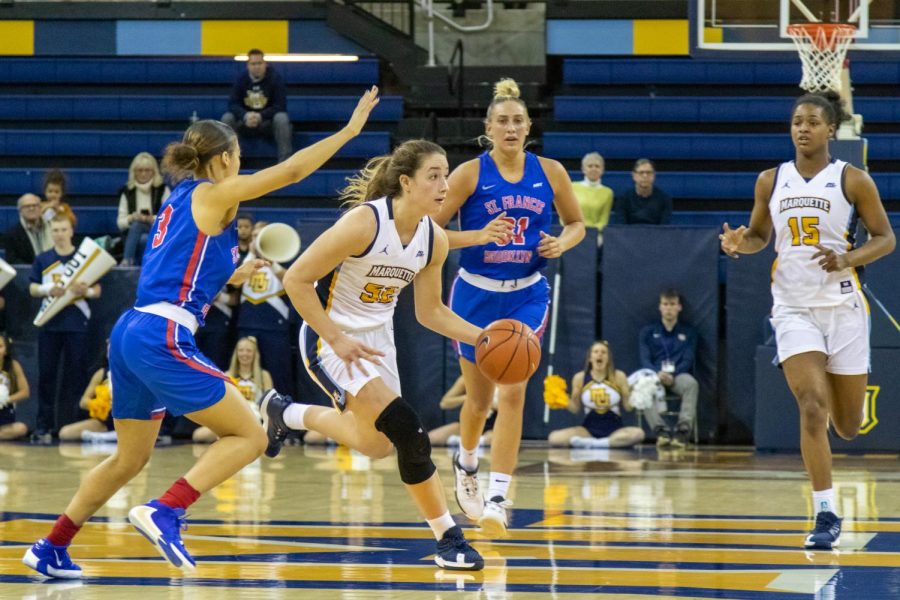 “Really thrilled to get the win,” head coach Megan Duffy said. “I thought that there were a lot of positives.”

Both teams wore green shirts to promote awareness for organ donation and Donate Life America. Senior Tori McCoy was honored before the game as she continues to look for a kidney donor.

“(It was) a special night for our program,” Duffy said. “I thought it was really great to wear the green tonight … in honor of her.”

MU started off slow shooting just 37% in the first quarter. The second quarter was more of the same from the Golden Eagles, who led 42-35 at halftime.

“We allowed a couple of their (defensive) plays to dictate how we looked on offense,” Duffy said. “I thought our energy was just okay. We made a couple of adjustments at halftime, but really what we wanted to do was wear them out.”

“We focused on getting the ball into the posts, and our guards did a great job,” Marotta said. “That’s how I got those great opportunities.”

Marotta finished the game with a double-double, the first of her collegiate career, tallying 20 points and 12 rebounds.

“(Marotta) was a warrior out there,” Duffy said. “She’s been working like that every day at practice. I thought she was a huge presence inside for us. One of our keys for this game was to get out and own the boards.”

All 11 MU players saw action on the court. Freshman guard Claire Kaifes made her collegiate debut and saw nine minutes on the floor.

“With a young team and players in new roles, there’s going to be some of that sloppy play,” Duffy said. “(We) want to play fast … but we got to keep learning how to slow down and collect ourselves.”

Ally Lassen led the way for the Terriers with 24 points. Jade Johnson was the only other St. Francis player to reach a double-digit point total.

Marquette (2-0) hosts Illinois State University in its next matchup Sunday at 2 p.m.