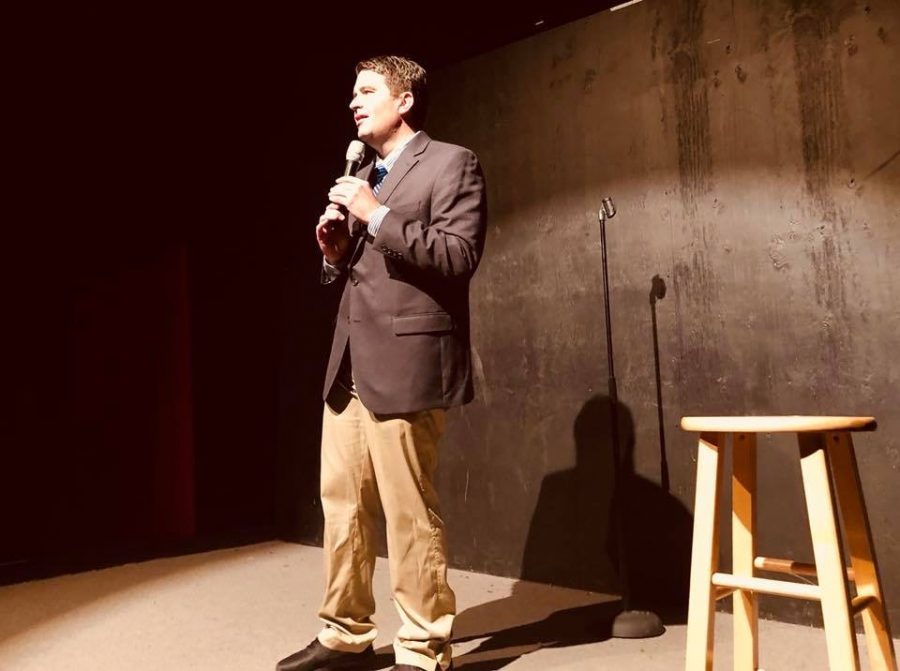 Bob Schram, two-time Marquette alumnus and adjunct instructor in the College of Communication, is a seasoned stand-up comedian and sketch writer.

As the late alumnus Chris Farley embodies, Marquette has been part of the growth of successful comedians in the past. This upcoming spring semester, incoming adjunct instructor Bob Schram will bring Farley’s comedy back to the university through its first sketch comedy writing class.

Schram will teach DGMD 4953: Comedy Sketch Writing, which will have one section with up to 18 available spots. Schram pitched the comedy writing course earlier this year, and it was approved by a committee.

Schram said the course will extend beyond writing to cover comedy basics and how to determine what order to place sketches in a sketch revue, which is a show that features a collection of sketches. The class will also involve acting out student-written sketches for a participation grade.

While Schram is a two-time Marquette alumnus, next semester will be his first time teaching at the university.

He received his first master’s degree in theology from Marquette in 2009. He worked in the Catholic Church for 10 years, which he said was formative in creating his sense of humor.

In 2017, Schram sought a career change. He returned to Marquette to get his master’s in communication. At the same time, he went through the Second City’s comedy sketch writing program in Chicago.

The Second City is known for kicking off the careers of comedians like Tina Fey, Bill Murray, Steve Carell and Chris Farley. Schram said the program involves a year of courses, with six different levels, each which last approximately eight weeks. Levels one through four are open to anyone, while levels five and six require an audition.

After completing levels five and six, Schram wrote and casted a Second City sketch revue stage show titled “Til Death Do Us Party,” which featured a variety of sketches focused on relationships. It played for four weeks.

Schram said he also took classes at Milwaukee’s Comedy Sportz, an improv comedy organization, and currently does stand-up comedy in Milwaukee once or twice a week.

As someone that began performing later in life, Schram said comedy can be frightening, but a learning experience.

“It’s scary putting yourself out there,” Schram said. “But I guess the one thing I’ve learned, the most valuable lesson you can learn from comedy is don’t be afraid of bombing. Because I think comedians bomb more than they kill.”

Amanda Keeler, an assistant professor in the College of Communication, said Schram’s proposal for a comedy writing class filled a need for a digital media writing course.

“I know a bunch of students who come through my Advanced Scriptwriting class are interested in writing comedy for television, and so I know that the need for more writing classes is definitely there,” Keeler said.

Keeler said she thinks the course will also cater to students involved in the Marquette comedy improv group the Fugees, many of whom are digital media majors.

Kelly Bauer, a senior in the College of Communication, has been a member of the Fugees since 2016. She said she plans to take Schram’s comedy sketch writing in the spring.

Bauer was on a comedy sketch team in high school, but has only done improv since coming to college. She said she looks forward to getting a chance to work on sketch comedy again.

“(In) improv, you just get a suggestion and you make something up on the spot. There’s no script or no story line, you’re just kind of making it up with a group of people,” Bauer said. “(Sketch comedy) involves a lot of planning and a lot of like editing it, whereas improv you just do it once and then it’s over forever and you’ll never see it again.”

Bauer said that while doing improv with the Fugees, she sometimes comes up with ideas for sketches, so she hopes to learn to adapt some of those ideas into a sketch format.

“I’ve never taken a comedy, or even like a theater-type class at Marquette,” Bauer said. “I’m a digital media major, but this is the first thing that I’ve done that’s like specifically involved in what I’m really interested in outside of class, so I’m really excited for that.”

Schram said he hopes this Comedy Sketch Writing class proves to be a success that Marquette can continue to build upon.

“It would be cool if Marquette might expand its comedy curriculum a little bit in the near future,” Schram said. “I would love to see it grow and I’d love to be a part of it growing.”