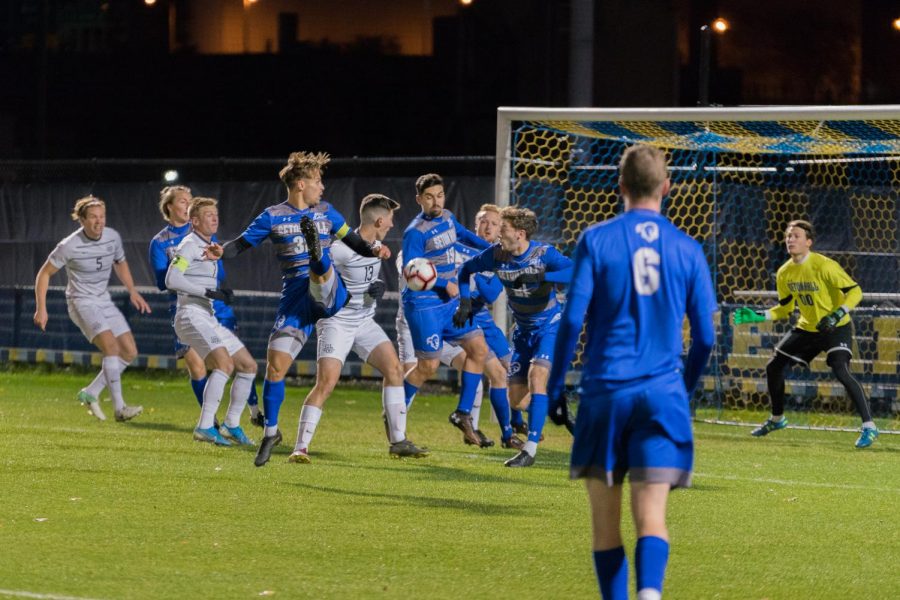 Men’s soccer dropped its final home match of the season 2-1 against the Seton Hall Pirates in overtime Saturday night.

With the loss, MU falls into a two-way tie for seventh place in the BIG EAST and 7-8-1 overall. The Golden Eagles have now lost two consecutive BIG EAST matchups and would not make the BIG EAST Men’s Tournament if the season ended Saturday.

Along with an MU win Wednesday, the Golden Eagles need either Butler or Villanova to win or tie for Marquette to get a spot in the BIG EAST Tournament.

“Now we’ve got to (get in the BIG EAST tournament) the hard way,” Bennett said. “It’ll be essential (to get a win) otherwise the season is over.”

“Hugely disappointed,” head coach Louis Bennett said. “Soccer is a beautifully cruel game. The margin for error at this time of the year is very, very small. We’ve got to make sure we’re on the right side of that equation.”

Seton Hall University got on the board first with a goal from senior forward Carlton McKenzie off a Sean MacLeod cross in the 21st minute.

“The first 20 minutes, we just didn’t play,” Bennett said. “Then we got back into the game (but) couldn’t score.”

Senior midfielder Connor Alba almost tied the game for the Golden Eagles in the 42nd minute, but Pirates goalkeeper Andreas Nota saved it to keep MU off the board.

Marquette finished the half outshooting SHU 7-5.

The Golden Eagles racked up several high-quality scoring chances in the second half. Senior forward Josh Coan scored his team-leading sixth goal of the season in the 71st minute to tie the game at 1-1.

“(Coan) has played well all season,” Bennett said. “He’s done a really nice job. He’s a player that other teams (have) got to stop.”

Just three minutes into the first overtime, McKenzie tallied his second goal of the match to secure the win for the Pirates.

“In the end, we conceded a really easy goal,” sophomore goalkeeper Cedrik Stern said. “It was unlucky.”

“We had chances in the second half to put the game away,” Bennett said.

Stern made several key stops to keep Marquette in the game and made six saves in total.

The loss came on Senior Night. Several of Marquette’s seniors have played important roles in the Golden Eagles’ fight for a spot in the BIG EAST Tournament.

“The seniors have an incredible impact on all of us,” Stern said. “On the field, off the field, they’ve invested so much in the program and they’re role models for all of us.”

This was the third time this season MU has played in an overtime match, and MU is 1-1-1 overall in those matches.

Marquette will play its final game of the season on Wednesday at DePaul University at 2 p.m. with a spot in the BIG EAST Tournament on the line.