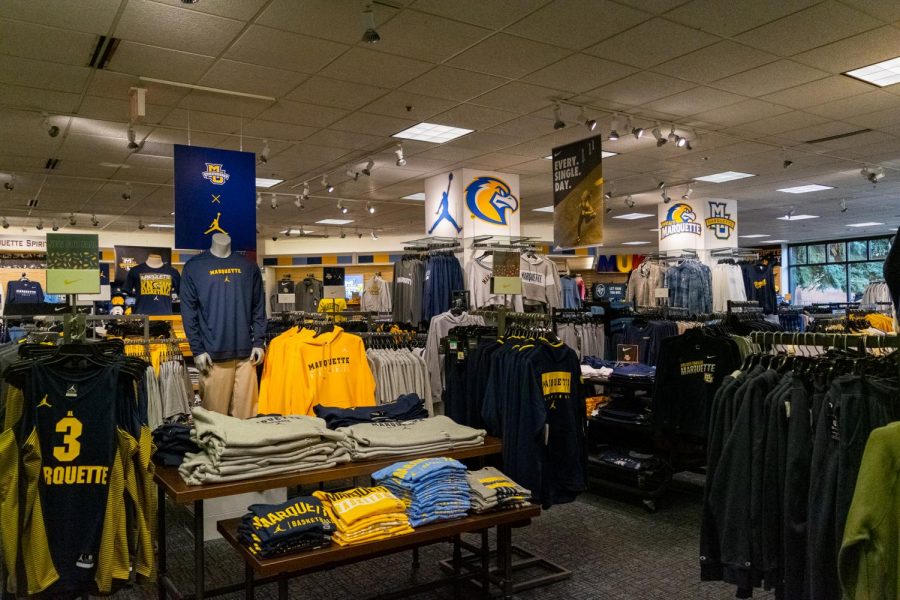 One of the employees, Craig Zientek, hired works for the Marquette Spirit Shop.

Marquette University received Creative Employment Opportunities’ 2019 Employer of the Year Award Oct. 10 for its work to diversify the workplace by hiring adults with disabilities. CEO is a private company that assists individuals with disabilities in obtaining and maintaining employment in community institutions and organizations according to its website.

Larry Birkett, associate director of the Marquette Spirit Shop, was one of the individuals honored by CEO.

In 2007, Birkett hired Craig Zientek as a stocker and to be one of Marquette’s part-time employees placed by CEO. Birkett said Zientek started working at the Marquette Spirit Shop shortly after he graduated from high school.

One of the things Birkett said he wanted to emphasize is the joy Zientek’s love for music and the joy it brings.

“He loves music, and we and our customers can usually hear Craig singing about a block away before he arrives at work each day,” Birkett said. “Some of his favorite artists are Carrie Underwood, Gloria Estefan, Jennifer Lopez, Jennifer Nettles and Mariah Carey— but his all-time favorite is the incomparable legend, Stevie Nicks of Fleetwood Mac.”

Birkett said that this was the first CEO Inclusive Employer Leadership Award Marquette has been given, and it was great to be recognized for an ongoing commitment to diversity and inclusion.

“It was important to me because everyone deserves the right to have a chance at finding meaningful work and also to feel like they are included in the communities that they live in,” Birkett said.

Birkett said he feels CEO has been a great business partner, as they provide funded jobs and coaching as needed to help Zientek adapt his unique abilities to his working environment.

Julie Mikolajewski, senior merchandise coordinator for the Marquette Spirit Shop, said it was an honor for the Spirit Shop to receive the award. She said hiring Zientek embodies the Ignatian value of “cura personalis,” which in Latin means “care for the entire person.”

Mikolajewski said Zientek is a joy to work with. She said he always arrives with a smile on his face and is usually singing. Mikolajewski said she cannot speak for the university’s hiring policies, but she said she hopes the award leads to other inclusive hires on campus.

John Sweeney, recreational sports director at Marquette, was also honored by CEO for his hiring of Ivan Lopez, who has cerebral palsy and is an employee at Marquette’s Helfaer Tennis Stadium and Recreation Center.

Sweeney said this was the inaugural employer of the year awards for CEO, and he is thankful Marquette was recognized for its work with individuals with special needs and to be included in this great honor.

Sweeney said the positive social interactions Lopez has with everyone are nice to have around.

“Ivan is very much a part of our staff, wears our rec sports staff shirts, punches in and out and is treated as any other employee. The joy that he brings each and every day to our staff is priceless,” Sweeney said.

Sweeney said Lopez, who coworkers call the “Human Zamboni,” cleans the wood courts in the multi-purpose room/gym. He said the task is important due to the hundreds of students who use the courts daily. He said it is imperative that the courts are clean and safe to use, especially during the winter months with all of the dirt and salt brought into the facility.

Sweeney said he hopes Marquette’s work in the Spirit Shop and recreational sports department will serve as a role model for other departments.