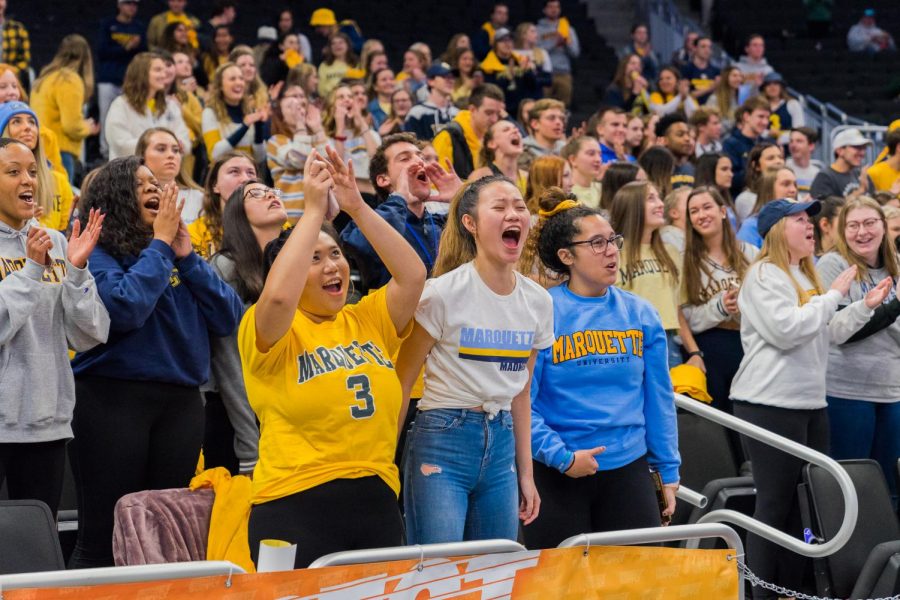 A crowd of students cheers at a men's basketball game at Fiserv Forum.

The $140 student section men’s basketball season tickets sold out at the end of August, which was the fastest they’ve ever sold out, said Brian Morgan, assistant athletic director for ticket sales and strategy.

“With the student population of about 9,000, to get 33% of your students to buy student tickets and support the program is crazy,” he said.

One thing Morgan said he commends Marquette students on is their passion for basketball in comparison to other schools. Morgan said no other school in the BIG EAST has more than 1,500 student seats.

“We allot the most student tickets in the BIG EAST, and they show up and it’s awesome,” Morgan said.

“(Students) can still purchase a regular fan ticket and still attend,” Morgan said. “It’s general admission to get into the student section, so depending on what the game is like, we have those five or six games where we do have capacity, but the games that we don’t (have capacity), more than likely they can get into that section as well.”

Brendan Illing, a junior in the College of Engineering, said one of his favorite things about basketball games is the “pure energy of the crowd.”

“Especially at the Fiserv, everybody gets so into it,” Illing said. “I remember my freshman year, they had the (National Invitation Tournament) games in the Al (McGuire Center), and just cramming that many people in a small space all cheering for the same team. Even though we lost, it was still a really fun game.”

Illing plays for the Marquette pep band and plays at nearly every game during the men’s basketball season. He said this gives him the opportunity to feel connected to the team.

“Traveling with (Men’s Basketball) during tournament season …  you’re probably at a higher percentage of their games than most people are,” Illing said. “Feeling all of the ups and downs with them because you want to travel so if they’re doing good you travel whereas if they’re doing poorly you won’t get to.”

He said his hope for this season is for the team to send off senior Markus Howard properly.

“You have to give him a little bit of glory as he leaves the school. An all-time great Marquette player,” Illing said. “And so far, he’s won nothing (in the NCAA tournament). So, you’ve got to do something for Markus Howard.”

Illing said that college sports are tailored to the students currently attending the school and he loves how the basketball program connects with the Marquette students.

“I really like how much the team and athletics in general tries to really cater to the student body rather than anyone else,” Illing said.

Illing said that more people attend the weekend games, which make for a better atmosphere.

“Those weekend games, everybody’s there, the stadium’s packed, it’s loud,” Illing said. “Those are my favorite.”

Season ticket holder Allison Stowe, a freshman in the College of Business Administration, went to her first game Oct. 29.

Stowe said she attended the game with her friends and indulged in Chick-fil-A, a restaurant option at Fiserv Forum.

As a high school basketball player herself, Stowe said having prior knowledge of the game makes it more exciting.

“I play basketball for fun now,” Stowe said. “I love the sport, so watching them play it’s even more fun, and I understand it super well.”