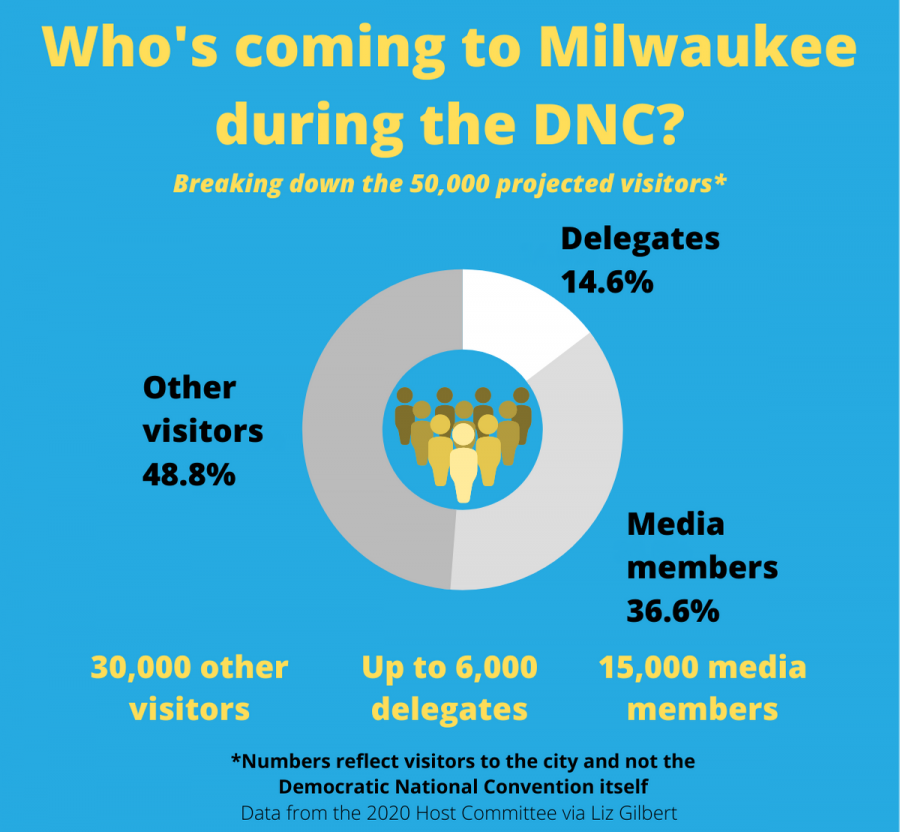 Liz Gilbert, former resident of South Florida and current president of the Host Committee for the 2020 Democratic National Convention, was shocked to see beaches in Milwaukee.

So were her family and friends, Gilbert said, when she posted a picture of a gorgeous summer day online.

“So many people said, ‘I thought you already moved? Are you still in Florida, you know, visiting your family before you go?’ and I said ‘No! I’m in Milwaukee, people! Right here in Milwaukee and people are playing beach volleyball,’” Gilbert said.

Rather than having a negative or positive perception, many people have no perception of Milwaukee at all, Gilbert said.

“Explaining all we can about the amazing sights and sounds and smells and tastes and everything that you can experience here is one of the most thrilling parts of the job,” Gilbert said. “It’s just an amazing branding opportunity for the city So, we want to make sure we’re giving it everything that we have.”

As president of the Host Committee, Gilbert is tasked with overseeing the committee’s job of “organizing, hosting, and funding the 2020 Democratic National Convention” according to the committee’s new website.

Having previously worked for the convention in Charlotte in 2012 doing fundraising operations and as the finance director in Philadelphia in 2016, Gilbert is well-versed in the process of fundraising and has hit the ground running.

Gilbert said the fundraising process is going smoothly so far, with the committee currently on track with its goals. Enthusiasm from potential partners has facilitated the process, Gilbert said.

The Host Committee has been working on building its team, which Gilbert said she is proud to say is predominantly Wisconsin native and female. At the moment, the team consists of nearly 30 members, double the size of the 2016 Philadelphia Host Committee. Gilbert said the operation will continue to grow and reach nearly 100 people working through the joint offices of the Host Committee and the convention committee.

Marquette is also offering opportunities for its students to get involved in the convention. Lowell Barrington, chair of the political science department, said the Internships as Field Experience course is being offered in both Summer 2020 and Fall 2020. The course will give students opportunities to receive credit for convention internships.

Barrington said this particular course requires a concurrent or just-completed internship as a prerequisite requirement. This means that a student doing an internship next summer can take the internship course either that summer or during the Fall 2020 semester. Barrington said you do not need to be a political science major to take the course.

At an event regarding convention jobs and volunteer opportunities for students Oct 22, Marquette staff from various departments gave students advice on how to get involved with the convention, as well as how to prepare for attending it.

The panel emphasized the importance of treating members of Congress like people and preparing an “elevator speech” to present if you run into one. They stressed that students should use their knowledge of the city to their advantage. This knowledge could give students opportunities to connect with delegates or other visiting professionals through assistance with navigation or recommendations for things to do in the city.

In regard to student groups on campus, Marquette’s College Democrats currently do not have any official events planned for the convention, club president Catie Petralia said. However, the club has arranged for Jason Rae, secretary of the Democratic National Committee and chair of the Democratic National Committee Youth Council, to speak with members at a general body meeting Nov. 13. The executive board has been meeting with other individuals involved in the event.

As for Marquette’s College Republicans, club secretary Kelsey Fenske said the organization is not planning any events relating to the convention. However, Fenske said they are “happy with the commerce and tourism that the DNC will bring to both the city of Milwaukee and the state of Wisconsin.”

Marquette also created the Convention Steering Committee, which is “marketing the university’s residence hall rooms and event spaces to law enforcement, media outlets, corporations and non-profits who are going to be in Milwaukee for the convention,” according to the university’s website.

All funds raised from these ventures will go toward an “unrestricted scholarship,” as decided by the Executive Leadership Team consisting of University President Michael Lovell, acting provost Kimo Ah Yun and senior vice president and chief operating officer Joel Pogodzinski. Unrestricted scholarships can be donated to any Marquette college or program to support “the most pressing needs on campus,” according to the university’s website.

On an economic level, the 2020 convention will have an immense impact on the city with its effects equivalent to or greater than those of hosting a Super Bowl, Gilbert said.

This analogy is supported by projected numbers for the event. Super Bowl LII, which took place in Minneapolis in 2018, made an estimated $450 million for the local economy, with $370 million remaining after adjustments for ‘displaced tourism,’ spending that was deterred by the event. According to the Office of Minnesota Governor Mark Dayton, these numbers were well over projections and brought around 125,000 visitors to the surrounding area. Kristen Settle, director of communications for VISIT Milwaukee, said the organization anticipates 50,000 visitors for the convention, with a projected economic impact of over $200 million. This figure includes direct, indirect and induced spending related to the event.

“Direct spending is the money delegates and attendees pay for hotels, bars, restaurants, car rentals, venue rentals, etc,” according to VISIT Milwaukee’s website. “Indirect spending includes wages paid to restaurant, hotel, and transportation staff as a result of the convention. Induced spending would include purchases such as a gas by a delegate driving to Milwaukee.”

“(The convention) is an incredible opportunity for our city to shine, and VISIT Milwaukee is very excited to be a part of the process and showcase Milwaukee to the world,” Settle said.

According to additional statistics from VISIT Milwaukee, there will be over 1,500 events in the region throughout the four days of the convention with official events taking place at Fiserv Forum and the Wisconsin Center. The organization also noted that delegates will be staying in hotels in the Greater Milwaukee area, with non-delegates spreading out into Kenosha, Racine, Sheboygan, and Madison.

Gilbert said she wants the economic impact to spread out into the Milwaukee community where it needs to, which is why the 2020 Host Committee is the first host committee to have an entire department dedicated to intentional inclusion and the use of minority-owned businesses. Gilbert said she wanted to make sure this was not just a talking point, creating the department to truly integrate its mission into its work.

Outside of the Host Committee, the City of Milwaukee is working to address security for the event. Robert Bauman, alderman for the 4th District, said the Milwaukee Police Department is meeting with the Secret Service on establishing a security perimeter. The convention will take place in Bauman’s district.

In a statement, a Secret Service spokesperson said, “The Secret Service is working diligently with our local, state and federal partners to develop and implement a comprehensive plan to secure and protect all members of the Milwaukee community during the 2020 Democratic National Convention. This developing security plan is dependent on many factors and the security perimeter will be published once the plan is finalized.”

Bauman raised concerns about the convention’s impact for those with businesses or homes within the security zone.

“The initial thought was, ‘Oh this is going to be great for everybody.’” Bauman said. “Well, it may be great for a lot of people, but maybe not everybody right? Because if you’re inside that security zone, there may be significant restrictions on how you conduct business and how your customers can get to you.”

Until the security perimeter is finalized, it is uncertain which businesses and residents will be affected.

Bauman also said citizens should prepare for congested roads and delayed travel times during the convention. He suggested instead of driving, citizens should opt to walk, bike, scooter or take the bus when possible.

As for getting involved in the convention, there will be plenty of opportunity for citizens and students alike to volunteer, Gilbert said. One major way is in the 15,000-member volunteer corps, recruited and organized by the Host Committee.

The Host Committee is also offering internships that can be found on its website. This is the first host committee to pay its interns, using what has been deemed the living wage of $15 an hour, Gilbert said.

“I am the youngest person to ever serve in this role, and so I take youth engagement very seriously,” Gilbert said. She said she is determined to make sure the Host Committee and convention recruit young volunteers and make the internship program meaningful.

Both Gilbert and Bauman emphasized the importance of the convention as a branding opportunity for Milwaukee.

Bauman said some people have unfavorable opinions of the city  despite never having visited. He sees the convention as an opportunity to change this.

“To the extent we can dispel some of the negative images and negative impressions of Milwaukee that have been generated over the decades because of this national, international exposure,” Bauman said. “I think it’s a huge benefit that you cannot even measure in dollars and cents.”

Julia Azari, professor of political science at Marquette University, also said that because there is currently not a clear front-runner, it is possible that this convention will see multiple rounds of voting, which has not occurred since 1952. The likelihood of a contested convention will become clearer as the convention approaches.

Both social media and traditional media will play an instrumental role in the convention, Gilbert said, particularly in the efforts to showcase Milwaukee. Gilbert said she hopes the convention will allow people who are unfamiliar with Milwaukee to gain an authentic view of the city.

“The national perception might not even have people understanding that Milwaukee is on a lake or that there are beaches … or that there are these incredible foundations and activist groups doing amazing groundwork,” Gilbert said. “We want to showcase it all. And so we are going to work really really very hard and use our communications shop and our digital tools and everything that we can to be highlighting and advocating for the incredible story that is the city of Milwaukee.”