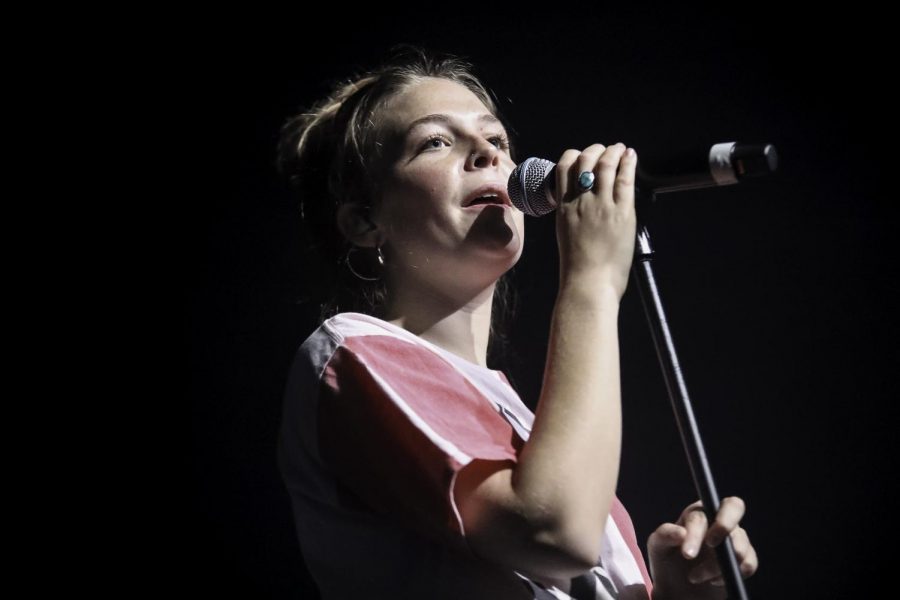 Indie music artist Maggie Rogers embodies feminism in every aspect of her work. Photo via Flickr.

Indie singer-songwriter Maggie Rogers’ acoustic cover of her hit song “Alaska” was interrupted at her Oct. 20 concert in Austin, Texas, when two men catcalled, “Take your top off” and “You cute though.”

Rogers immediately responded to the situation, both on stage and on social media, tweeting and posting to Instagram that she was “stunned. furious. fuming. confused.”

“I’ve been writing and producing music for 10 years — my body is my greatest tool for communicating that work,” Rogers posted on Instagram. “I want to use this moment to be very clear. There is no space for harassment of any kind at my show. Be kind to each other out there.”

This response is representative of Rogers’s purpose as a musician: to influence her audience by intertwining her art and her image with feminist messages. After just one tour, she has redefined the role of a female artist as someone who uses their profession to educate their audience and emphasize female rights and gender equity.

More female artists need to address the sexualization of women in the music industry by expressing feminist ideals in their art, in their speech and in their image.

Some of the most recently popular female artists sing songs with feminist messages. Lizzo sings about confidence in “Good As Hell,” and one of Kesha’s most popular songs is the feminist anthem “Woman.”

Still, few female artists utilize their influence as a platform to make feminist strides that are as articulate and impacting as Maggie Rogers’.

Other female artists stand up to the sexualization of women by not conforming to celebrity norms. Billie Eilish, for example, wears baggy clothes to prevent the public from sexualizing her. Her decision to do so is effective and emphasizes her art. By wearing baggy clothing, she shifts the focus from herself to her music. Still, this is not comparable to Rogers’s decisive and relentless incorporation of feminist ideals in her career.

Rogers uses her fame as an opportunity to influence others, and she doesn’t avoid talking about sensitive issues to keep fans satisfied — she is honest about her opinions and includes them as part of her identity as an artist.

She has made it clear who she wants her fanbase to include, and has been quoted saying,  “If you’re not a feminist, you shouldn’t be here,” at one of her concerts. She also has a Planned Parenthood booth set up at each concert.

Feminism is reflected in every aspect of Rogers’ identity. Her merchandise includes keychains that say, “Maggie Rogers is a witchy feminist rockstar,” her songs emphasize liberation as she sings about female independence and she speaks openly about her controversial beliefs on multiple social media platforms, such as her being pro-choice. In every aspect of her platform, she engages in activism and communicates feminism.

By incorporating feminist undertones in all areas of her profession, Maggie Rogers is creating an example for her fans and other artists to follow. Female musicians are given the opportunity to influence and change public opinion through their art, style and persona. They must be able to hold real conversations with their fans, be open in their values and use their status to promote feminism, especially in the music industry.