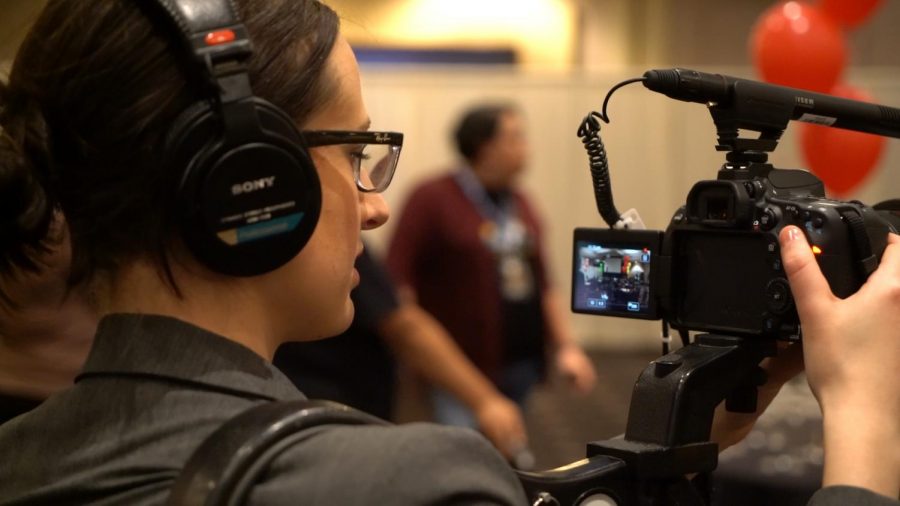 The film focuses on the challenges faced during the first annual pride prom. Photo courtesy of Robyn Di Giancinto

The short film “Pride Prom,” which runs about 12 minutes, premiered Oct. 23 at 9:45 p.m. as part of the Milwaukee Film Festival’s GenreQueer Shorts program.

The short film is based around the obstacles participants and organizers faced around the time of Marquette’s first annual Pride Prom.

Among the obstacles was a petition started by Tradition Family Property Student Action formed to resist, in the realm of ideas, the liberal, socialist and communist trends of the times, according to its website.

This petition accumulated approximately 18,700 signatures from Marquette community members as well as people not affiliated with the university. It demanded that the Pride Prom be cancelled.

Di Giacinto said around this time, she felt like the coverage of the situation was misrepresented by media. She said she set out to make a film that would accurately depict the situation.

“The film is meant to be told through a queer perspective,” Di Giacinto said.

Di Giacinto said this perspective is why there are no Marquette faculty members featured in the story.

Di Giacinto also said that there was a lot of pressure when making the short film, especially as she was so close to the subject matter.

“Making a documentary is something you can’t take lightly, you are displaying somebody’s story and they are trusting you with that,” Di Giacinto said.

Nick Ansay, a senior in the College of Arts & Sciences and attendee of the first Pride Prom, said that as a person who identifies with the LGBTQ+ community, he thinks Marquette does not feel very accepting.

“There are a lot of people on campus who stare at you if you don’t look like you fit it,” Ansay said. “I feel, especially with the religious aspect of Marquette, that many students are not accepting towards people in the LGBTQ+ community, especially our transgender brothers and sisters.”

The press would continually stop in for interviews during the controversy and that was very uncomfortable for a lot of people, Ansay said.

Ansay said he didn’t feel any backlash after Pride Prom, but he could not speak for those who planned it.

Ansay said Pride Prom was a symbol that the LGBTQ+ community on campus will not be silenced nor will it go away.

“Even though we got pushback from the school, even though Marquette might say they didn’t push back, we wanted to show the school and the whole Milwaukee community that we were and still are determined to be a fully inclusive space for all folks,” Ansay said.

Ansay said he thinks Marquette is not doing enough for the LGBTQ+ community at Marquette. He feels that they have put LGBTQ+ priorities on the back burner.

He said there has not been a lot of support from the top of the ladder. Overall, he said that more needs to be done and neither the LGBTQ+ Resource Center nor the LGBTQ+ community at Marquette will stop until these injustices are fixed.

E. Tejada III worked for Marquette as the Founding Coordinator for the LBGTQ+ Resource Center.

They said Pride Prom had over 35 co-sponsors and supporters from organizations and offices both on and off-campus. Pride Prom’s motto was “Be Proud. Be You. Pride Prom 2018.”

Tejada III said Pride Prom was a statement from those who supported and attended, saying that they wanted people to show up as their authentic self.

Tejada III said Di Giacino’s film was more about their own story and journey in making Pride Prom 2018 a reality. They said it portrayed Marquette can be hard and feel lonely and unsupportive – whether a student or a staff member – if you have any minority identities. While they said the work at the LGBTQ+ Resource Center was often an uphill battle, Tejada III said they hope they affected people in a positive way.

“For those I interacted with, and those I didn’t, I hope the work I did for 2.5 years at the LGBTQ+ Resource Center really made hope possible and overall a little less lonely,” Tejada III said.