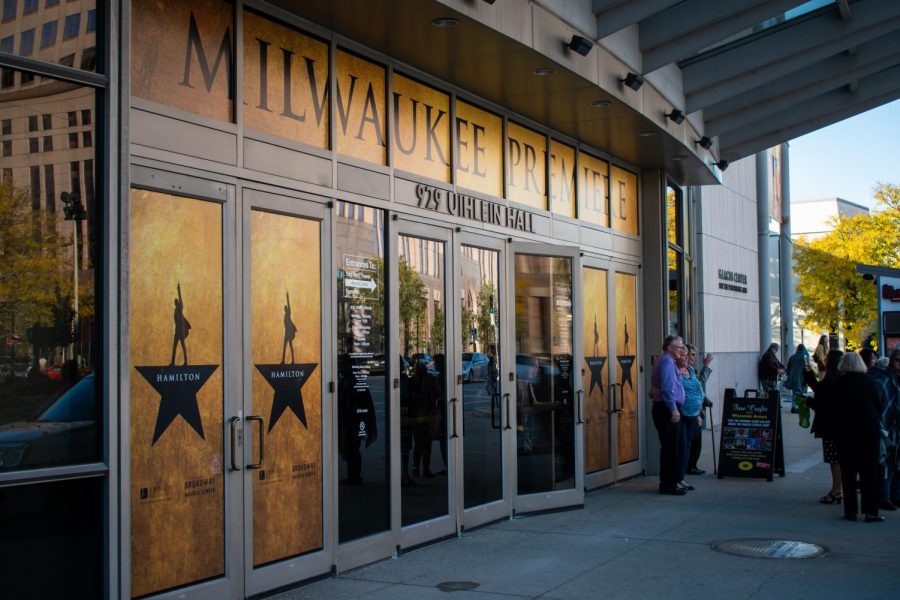 The award-winning musical is currently showing at the Marcus Center in Milwaukee.

The 2016 Tony Award-winning musical and national phenomenon “Hamilton” is playing at the Marcus Center until Nov. 17. “Hamilton” tells the story of Alexander Hamilton, George Washington’s right-hand man during the Revolutionary War, and the birth of America, through hip-hop and contemporary music.

Written and created by Lin-Manuel Miranda, who also performed as the titular character in the original Broadway cast from 2015-’16, “Hamilton” was inspired by the biography “Alexander Hamilton” by author Ron Chernow. Miranda worked on the Broadway production with director Thomas Kail and co-arranger and music director Alex Lacamoire. Set designer David Korins created an extrordinary stage to tell the story of “Hamilton.” Combined with incredible choreography by Andy Blankenbuehler, “Hamilton” is a perfect illustration of the birth of America.

The production in Milwaukee is the United States tour “Philip” cast. There are currently seven productions of “Hamilton” playing around the world: a second U.S. tour “Angelica” cast, which is currently in Philadelphia, and productions in New York, Chicago, San Francisco, London and Australia.

“Hamilton” illustrates the story of colonial America through an untraditional lens. The show “blends hip-hop, jazz, blues, rap, R&B and Broadway,” according to the Marcus Center’s website.

Going into “Hamilton,” I knew little to nothing about the show. I was aware that it was about the story of Alexander Hamilton and that many of my friends who enjoy musicals knew every word to every song. I was extremely excited to experience this masterpiece for myself, and I intentionally did no research beforehand so I could take it in at face value.

Once the lights flickered and dimmed, my excitement peaked. I could not wait to see if Hamilton would live up to the hype.

For the opening act, I was expecting something to blow me off my feet with the first note, but I was pleasantly surprised that they eased the audience into the excitement with inviting music that introduced the characters and set the scene.

Aaron Burr, played by Nik Walker, began the action with an opening number that literally set the stage for the rest of the musical.

When it came time to introduce his character, he says, “I’m the d— fool that shot him,” the “him” referring to Hamilton. Again, knowing nothing about the show and without being a history buff, this detail initially felt like a spoiler. How could they tell us the ending within the first number? I soon forgot that detail when the entire ensemble’s vocals blew me away.

Joseph Morales, who plays Alexander Hamilton, did a wonderful job of playing a character that knows he has a lot more to learn in life and refuses to give up on his dreams. Hamilton’s growth within the story also draws parallels to the growth of America and democracy.

The set also literally grows, further representing the country’s creation and expansion. Hamilton’s character develops as he helps George Washington, played by Marcus Choi, fight the Revolutionary War in Act One, and becomes a key founding member of the United States in Act Two.

Other aspects of the show I enjoyed include Hamilton participating in two rap battles at the Constitutional Convention, the heartwarming relationship between Angelica and Eliza and the aspects of real-life conflicts that are incorporated into each character. “Hamilton” is not a perfect story of America. It illustrates challenges within domestic life, such as temptation, cheating and grief, as well as the struggle of creating a healthy work-life balance.

Even though many of the songs in “Hamilton” are rapped, I was blown away by the quality of the sung vocals – specifically, the Schuyler Sisters, Angelica, Eliza and Peggy, played by Ta’rea Campbell, Erin Clemons and Nyla Sostre, respectively. Their vocals perfectly mixed a lyrical style with sass, and their voices blended so well yet were each distinguishable and strong.

The Schuyler Sisters each have voices that define their characters. Angelica has a rich, strong voice representing her character as a confident older sister. Eliza, on the other hand, has a more lyrical voice that is representative of her trusting and kind personality, as described by Angelica. Peggy, as the youngest, has a light and silly but still beautiful voice. Together, the songs they sing are fabulous.

One thing I wish I would have done was listen to the soundtrack beforehand. My goal was to go in with an open mind, but because many of the songs in “Hamilton” are rapped at a quick pace, I found it hard to understand many of the lyrics. Coming in with a fresh mind didn’t take away from the overall experience, but listening to the songs ahead of time may have enhanced it.

My favorite aspect of the set design, without giving too much away, is that the inner circle of the stage rotates. At the start of the show, I was convinced my eyes were playing tricks on me, but the stage does have the ability to move, and it adds a lot of depth to the performance. For example, while Hamilton is listening to Angelica and Eliza talk about their love for him, he is stagnant on the stage while the sisters rotate around him.

I was blown away by the musical and left the theater feeling a little more educated on American history. While the show was incredible, I wish I would have gone to an earlier showing because after nearly three hours of excitement, I was exhausted.

However, nearly a week later I cannot stop thinking about it. The songs are still stuck in my head, and I cannot wait for my next opportunity to see this masterpiece.

“Hamilton” will be in Milwaukee through late November and offers a lottery ticket opportunity. For each performance, there will be 40 lottery tickets available at $10 each. Patrons can visit the Marcus Center’s website to enter and for more information. Regular tickets start at about $100.