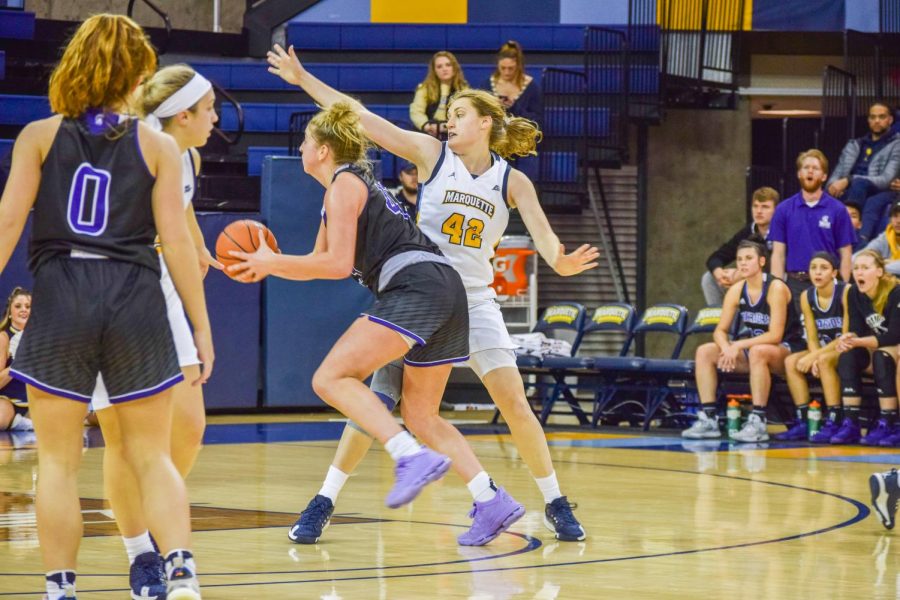 It marks the first win of the Megan Duffy era at Marquette.

“It was just really exciting to put those uniforms on, turn on the lights with the band and play a different opponent,” Duffy said. “Today was just a cool experience for me.”

MU finished the first quarter on a 20-2 run.

“Our first quarter was tremendous,” Duffy said. “(We were) just getting the ball out, sharing the basketball and (getting) extra passes.”

The Golden Eagles opened the second quarter with an 8-2 run and increased the lead to 37-13, and entered halftime leading 43-23.

The third quarter was not much different. MU dictated the pace of play while Winona struggled on both ends of the floor.

Marquette’s press started to work in the second half, causing more missed shots and turnovers leading to easy points.

“(Points off turnovers) is always a great stat if you can just manufacture points off other things than just on offense alone,” Duffy said. “Our pressure at times was really good.”

Freshman Jordan King and senior Izzy Spingnola took over the third quarter, combining for 15 of the 30 third-quarter points.

Marquette continued cruising in the fourth quarter leading to a win in its only exhibition of the preseason.

Duffy said King “was solid with the basketball. She played some wing, some point. Her energy and composure out there was really good. We saw how versatile she is as well.”

“I am big on if you’re ready to play and put the work at practice, you will get the time,” Duffy said. “The big thing was sprinkling our freshmen in to give them the experience for those moments when it matters.”

The Golden Eagles will have their first regular season matchup against Morgan State University Nov. 5. Marquette will take on the Bears at the Al McGuire Center at 11:30 a.m. Central Standard Time.