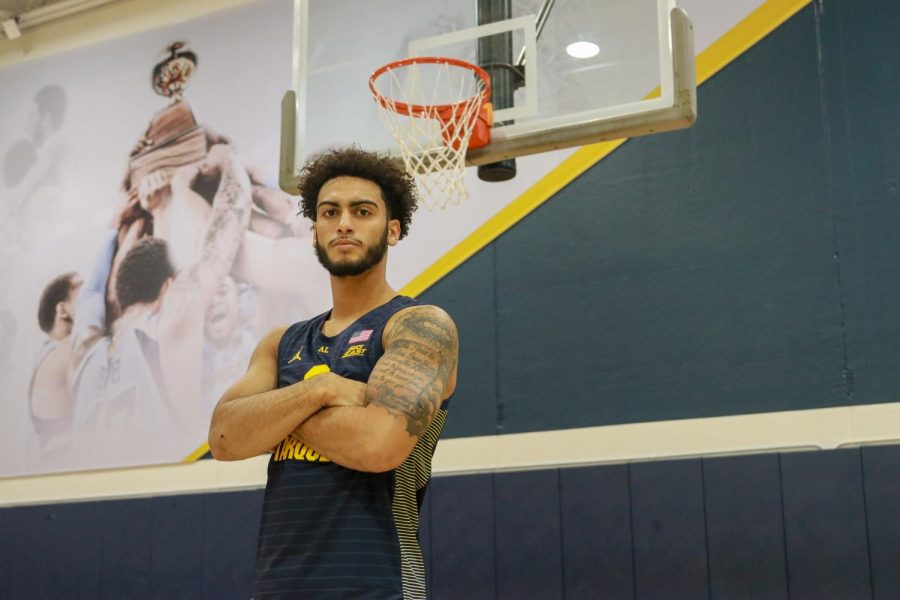 “We really didn’t have any answers for him. He got going. He got on some runs. He made some tough shots,” Weber, Kansas State University head coach, said. “Obviously, there were a lot of fouls called in that game and he got a lot of free throws (19 of 21), but that’s to his credit.”

Howard’s decision to stay at Marquette for his senior year gives coaches like Weber one more year of game-planning against the robust player.

“He’s one of the best shooters we’ve had in this league, really,” Villanova University assistant coach Kyle Neptune said. “He never stops moving, and he can do it so many different ways. He can come off screens, he can isolate, he can get to the basket (and) obviously he shoots threes.”

Golden Eagle play won’t be the same this year, though. Players Sam and Joey Hauser transferred to the University of Virginia and Michigan State University, respectively, leaving Howard with a larger leadership role this year.

“Markus is one of the faces of college basketball,” head coach Steve Wojciechowski said. “He decided to come to our program when we were rebuilding, and that’s not an easy position to be in.”

Neptune credited much of Marquette’s previous success to how well-rounded the team’s offense has been.

“One of their biggest things has been they’re very well-balanced,” Neptune said.

Without the Hausers, Howard said he is looking for others to take the scoring pressure off of him.

Wojciechowski singled out four players he expects to step up in this season’s offense.

“If you think of Markus and Sacar (Anim), and you add Koby (McEwen) and Greg (Elliott), you have four experienced playmakers that can put pressure on the defense in multiple ways off the dribble drive or their ability to knock down shots,” Wojciechowski said.

Many of these players did not previously hold major offensive roles for the Golden Eagles. McEwen is coming off a redshirt season, and Elliott missed last season with a thumb injury.

When McEwen was at Utah State, he won Mountain West Freshman of the Year in 2016-’17 and then was named Third Team All-Mountain West after averaging 15.6 points per game and leading the Aggies with 5.4 rebounds per game in 2017-’18.

The offensive changes may force the team to embrace a more defense-first attitude.

“We’re going to focus on the defensive end first and let the offensive game come to us,” Anim said. “As the season continues to go on, we’re going to continue building that identity.”

Neptune said he remains confident the loss of the Hausers will not significantly affect Howard’s production.

“They’ve got a bunch of other guys that are really good players that were budding stars in their own right,” Neptune said. “I think they’ll be a different team, but they’ll be just as good or better.”

Teammates like junior Theo John said they embrace Howard as the team’s main leader going into the season.

“Ever since I got on campus, he’s made sure I know I’m good, checking in on us,” John said.

Howard’s leadership is something McEwen, a redshirt junior, noticed when he arrived on campus last season.

“He brings the same positive attitude every day. In terms of just leading practice, stretches in the weight room, stuff like that,” McEwen said. “He’s a great leader in that aspect.”

McEwen said Howard is also a fun player to share the court with.

“He makes the game a lot easier for everybody else. He provides a lot of space for everyone because he can shoot,” McEwen said. “He’s really fast, so we play up-tempo when he’s on the floor. His ability to get into the paint and create shots for others is good, too.”

“I know the things that he has been through, I know how hard he works, and being able to see him on the floor and things to work out and come in his favor is probably the most exciting thing,” Morrow said.

McEwen added that Howard’s leadership extends off the court through engaging with his teammates. He initiates fun bonding experiences like having breakfast at his house or just going to eat with them.

Howard is looking to build off an impressive season in 2018-’19, where he finished as the unanimous BIG EAST Player of the Year. He led the conference with 25 points per game and set the program record for 851 points in a season.

“He’s tough to stop. Obviously, coach gives him a lot of freedom,” Weber said. “And then he gets into those heat-check games, feeling good and confident and makes a lot of tough shots. That’s what I kind of admire about him.”

While many top players across the country in Howard’s class either entered the NBA Draft or saw their chances of being drafted before returning to finish school, the Associated Press Second Team All-American player decided shortly after last season to complete his senior year at Marquette.

Howard said he prayed about the decision a lot and talked with his coaching staff and family. Those in his corner were completely honest with him, he said.

“At the end of the day, it was truly a family decision. … I knew me coming back to get my degree first and foremost was extremely important to me,” Howard said. “Completing my commitment to Marquette was something that really was important to me. Also just another year to grow as a player and impact the community off the court as well as on.”

Howard is 30 points short of becoming the program’s all-time leading scorer as he enters the season and is 45 points away from becoming the first 2,000-point scorer in Marquette men’s basketball history.

“To even be in contention with names like that, like Jerel (McNeal), Dwayne (Wade), Travis (Diener), Steve (Novak) … it’s truly a blessing in itself. You can do nothing in this life alone,” Howard said. “To be in conversations with those people is something as a kid you can only dream about. To possibly put those into realization was definitely something that’s always been a dream of mine.”

As the season gets started, Howard is looking forward to one more chance to play against teams like Kansas State and Villanova in the blue and gold.

“It’s been an amazing ride, and I’m looking forward to just having one more go around,” Howard said.

In the meantime, coaches like Weber are still searching for a way to stop him.

“We have to figure out who can stop him. I don’t know, we’ll see how their other guys progress,” Weber said. “They had a lot of weapons last year, which also helped him out because you had to spread your defense.”