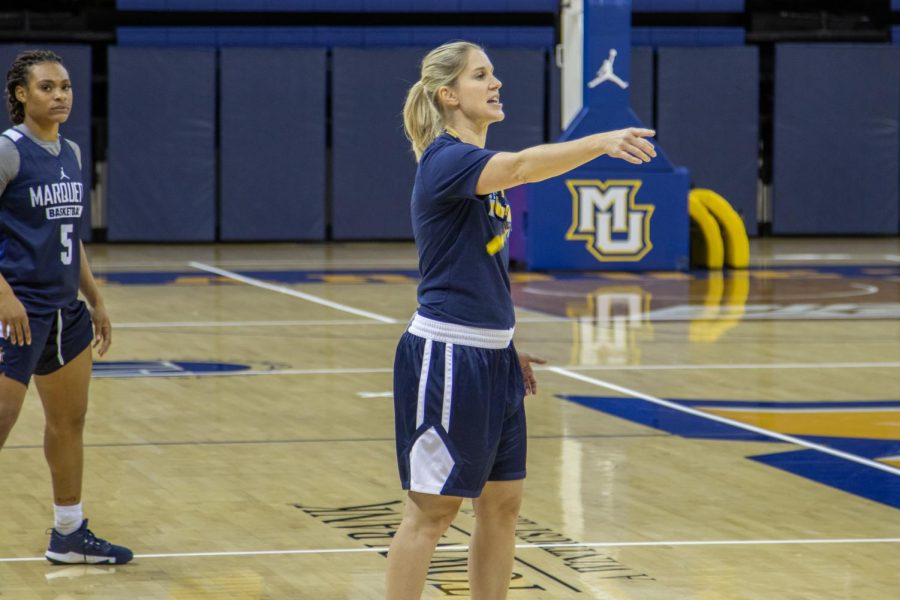 “The Marquette Way.” It’s the philosophy new head coach Megan Duffy is instilling in the Marquette women’s basketball team. It embodies what Duffy is all about as she enters her first year with the Golden Eagles.

Duffy’s head coaching career began in 2017 when she won 20 games with the Miami University Redhawks and became just one of four rookie head coaches in all of NCAA women’s basketball to accomplish the feat.

Overall, Duffy finished with a 44-20 record in her two years with the RedHawks, making her the winningest active coach in the Mid-American Conference.

Duffy inherited a Marquette roster that lost all five of its starters from last season to graduation. The team now has to replace Natisha Hiedeman, Allazia Blockton, Danielle King, Erika Davenport and Amani Wilborn, all of whom were 1,000-point scorers.

The Golden Eagles have a long way to go to reach the same level of success that former head coach Carolyn Kieger and her legacy achieved.

Under Kieger, the program won its first-ever BIG EAST title at the Al McGuire Center in 2017 and earned a program-best fifth seed in the NCAA Tournament.

Although Duffy said it’s likely going to be a season with many ups and downs, she fully embraces the pressure of sustaining a winning culture that Marquette fans have seen the past several years. She said it is her goal to discover that new championship-caliber team.

“If anybody knows me and my background, I think I’ve put pressure on myself for as early as I can remember,” Duffy said. “The greatest coaches and players are the ones that put it right on their shoulders and take accountability. I’ve felt pressure ever since I’ve been in this business. It’s a great thing — it motivates me.”

Jordan King, who coaches voted as BIG EAST Preseason Freshman of the Year, leads the freshman class along with Camryn Taylor and Taylor Valladay. Among those three, Duffy said she sees the most potential with Taylor.

“She just has a presence about her,” Duffy said. “She’s probably been the most efficient player we have with minutes per shooting percentage, per rebounds, all those little statistics.”

One of the biggest tests the Golden Eagles will have to face this season is finding a consistent option at point guard. Duffy said the team is going to play multiple guards rather than having a true point guard, and freshman Taylor Valladay is working her way into that role.

Senior guard Isabelle Spingola said the one aspect of Duffy’s coaching style that impresses her the most is her energy during practice.

“She’s always talking to someone and encouraging them. She’s very active,” Spingola said. “Seeing where everybody started in the beginning of the summer to now, everybody has drastically improved. It’s going to be fun, and I’m really looking forward to it.”

The BIG EAST Preseason Coaches’ Poll ranked Marquette ninth of 10 in the conference a year after it was picked to finish first. Many players see the ranking as a huge motivator heading into the season.

“I want to be picked last,” sophomore forward Chloe Marotta said. “Having a chip on our shoulder is better for this team this year.”

Valladay said everything happens for a reason.

“We got to prove that we’re better than that,” Valladay said.

Duffy’s basketball career began long before becoming a coach. She was a four-year point guard for the Notre Dame Fighting Irish, leading the program to two Sweet 16 berths, was a two-time All-BIG EAST First Team honoree and is one of four players recording at least 1,000 points, 500 assists and 200 steals. In 2006, Duffy won the Frances Pomeroy Naismith Award and the BIG EAST/Aeropostale Scholar Athlete of the Year award.

Duffy’s other accomplishments accumulated during her basketball-playing career include winning a gold medal for Team USA in 2005, receiving All-American selections and playing in the WNBA in New York and Minnesota.

Duffy’s success as a player has immediately translated into results as a head coach at Marquette, beating Winona State Saturday afternoon in the exhibition game by 46 points.

“The teaching part is at the core of what we do,” Duffy said. “Success comes with it. I go home every night and watch the film. I have an obsession of trying to get the team better. It’s going to be (about) patience.”

The key to success for Marquette this season will be how it establishes a reinvented culture implemented by Duffy, as team cultures can shift with the addition of a new coach.

“The big thing with our culture is, ‘How hard can we work every day?’” Duffy said. “We have to be the team with the identity of diving on the floor for the loose balls, taking the charges, doing the little things.”

Despite the challenges of a transition, Duffy has the same standards as years past.

“We want to win, we want to do it the right way. It’ll be fun to shape this team as the season goes on,” Duffy said.