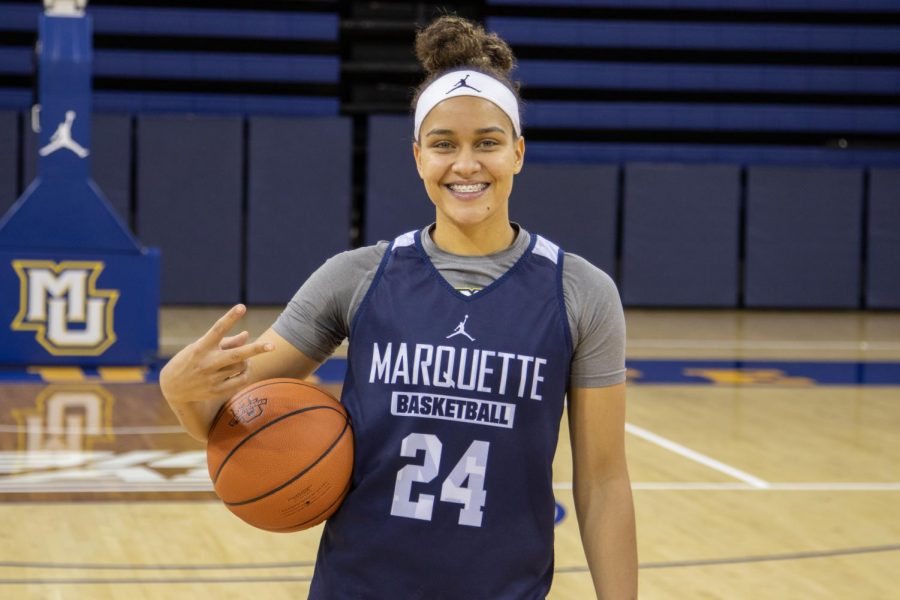 With the 2019-’20 season looming, Marquette women’s basketball is preparing with new leaders, one of whom will be junior guard Selena Lott.

After averaging 7.1 points per game with the second-best field goal percentage of the team last year, Lott’s role offensively is going to play a major part in Marquette’s season.

“It’s really crazy. I don’t think this young woman has reached close to her potential,” head coach Megan Duffy said of Lott. “You saw glimpses of it last year when she could come in and drop 17, 18 points, and she’s always been known as a defensive stopper and hustle kid and can guard the best player.”

Assistant coach Scott Merritt echoed Duffy’s comments on how much of an impact Lott can have with the ball in her hand. He has seen her development since she stepped foot on campus.

“She’s going to have to take a little bit more of an onus offensively and be more aggressive. She has the capability to really, really score and be dominant on offense and be confident in herself to do that,” Merritt said.

As the team’s only returning starter, Lott has a lot of offensive responsibilities.

“I’m really looking forward to building (her potential) and having those conversations off the court and helping her mature in that way as a lead player in our team and our offense,” Duffy said.

Merritt said he expects Lott to adapt when defenders challenge her.

“She’s a great passer,” Merritt said. “She’s played with great players before, so she knows how to make plays and finding that balance of, ‘When do I need to be aggressive and score, and when do I need to make a play for a teammate?’ That will be vital for her growth as a player this year.”

Lott is the team’s only returning starter from last season, and Merritt said he envisions her being a leader both on and off the court.

Merritt said Lott’s experience allows her to give pieces of advice to lead by example in the classroom.

She said she understands the challenges of this year’s season, but Lott said she’s ready for it.

“It’s taking a little bit, but it’s all about hard work, commitment and effort,” Lott said. “I’m kind of more of a leader, more of a vocal leader. I’m just getting our freshmen on board.”