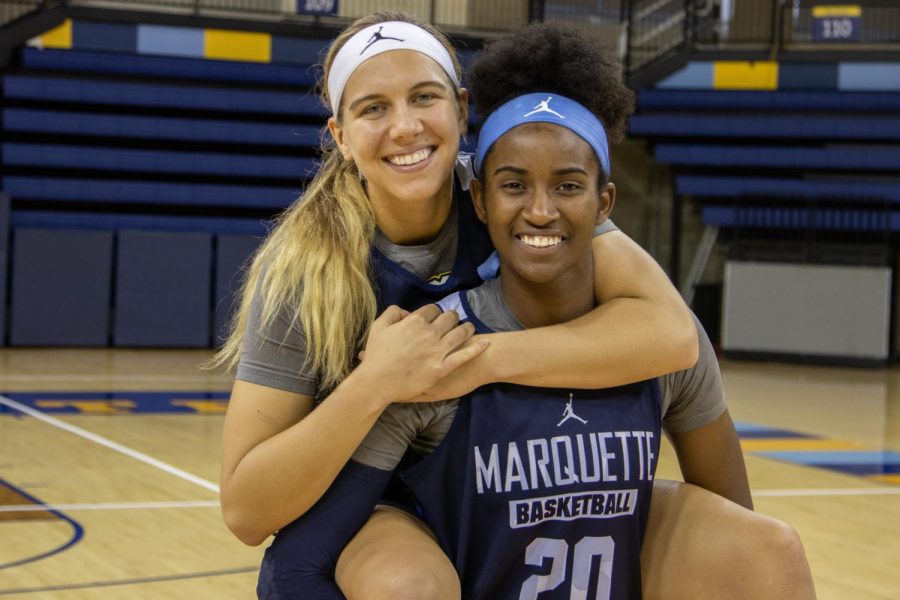 Not only are seniors Altia Anderson and Isabelle Spingola are adjusting to new roles on the court this season, but they are taking on heightened responsibilities in the locker room.

“They’ve really led me as much as I’m trying to lead them,” head coach Megan Duffy said. “It’s fun to be able to talk about them in these new roles.”

As veterans, the duo has been deputized to mentor a new coach and seven teammates.

“They always could obviously (have) somebody else creating for them, whether it was Hiedeman or Blockton, and now they’re the ones that have to create with the ball in their hands,” Duffy said. “That’s going to take some time. They’re embracing that, and it’s not perfect right now.”

Blockton, a two-time BIG EAST Scholar Athlete of the Year, is the program’s all-time leading scorer. Hiedeman was the 2018 BIG EAST Player of the Year who played in the WNBA Finals with the Connecticut Sun three weeks ago. Davenport was a three-time BIG EAST Second Team honoree, Wilborn was a BIG EAST All-Tournament member, King started for four years and Dahling was team captain.

“They’re like my sisters so … we’re close,” Anderson said. “That hurt my heart, but they’re on to bigger and better things, and we’re learning and we’re growing as a team.”

Spingola said everybody has had to step into new roles which the team has been improving on at every practice. However, the transition has not been easy as Spingola said she misses giving the former seniors the ball and letting them score.

“This year on offense, we’re going to have to work more as a unit,” Spingola said. “It’s going to be more passing to set up a teammate versus one-on-one.”

Both Anderson and Spingola have helped Duffy acclimate to the Marquette culture.

“They’ve been just really honest with me,” Duffy said. “We’ve had great conversations with not only their roles but, you know, why they were so successful in the past. … They have a lot on their shoulders being seniors, gotta love them. They’re doing a great job.”

Duffy said Anderson and Spingola have been crucial for teaching her the identity of Marquette women’s basketball as well.

“As much as I might have some different philosophies from the past, I love hearing about the ones who won those rings and what it was like and what they fought through,” Duffy said. “I’m open to hearing their thoughts on what do they think this team can do different than maybe the previous seasons and how do we deal with all the young players.”

Having six freshmen and a transfer, Duffy said she has done more teaching than in seasons past.

“Being in BIG EAST championships, being a part of a winning culture, we know what hard work is,” Spingola said. “So just showing the freshmen what hard work is and how to come every day to practice ready to learn.”

For Anderson, sharing the floor with players like Blockton and Hiedeman helped her advance in her basketball knowledge.

In addition to senior leadership, Anderson and Spingola won’t be coming off the bench anymore.

Last season Spingola was the only junior to start at least one game. The 6-foot guard played 34 games, averaging 14.7 minutes and 5.3 points per game.

She was known as a sharpshooter, never missing a free throw and finishing the season with a 40% shooting percentage. Her 38.7% from beyond the arc ranked ninth in the BIG EAST.

“Izzy’s always been known as one of the best shooters in the conference,” Duffy said. “What we’re really challenging her to do now is finding different ways to score. We’re going to bring her off some screens, we’re going to have the ball in her hands a little bit more.”

Duffy plans on having Spingola be the “quarterback” this season, handling the flow and pace of the team.

“She’s such a steady kid in a lot of ways so just making sure that she knows her role isn’t just to knock down those three-balls. She has other things she can really help us with,” Duffy said. “Can you lead the huddles? Can you be the IQ player that can contribute? Maybe if your outside shot isn’t falling, what else can you bring to our team whether that’s rebounding or just keeping us together and keeping that composure.”

In regard to personal goals, Spingola said she wants to be an all-around player and has worked in the offseason to expand her game, especially working on some of her weaknesses like one-on-one defense, ball-handling and her pull-up jumper.

“You’ve seen in the past how athletic she is and how she can rebound the basketball, and those will be her staples. But we’re really trying to get her a little bit more in a scoring position, in a scoring role,” Duffy said. “She’s able to shoot it from the outside. She’s been pretty good inside. I know it’s really her focus to continue to finish at a high level.”

The team’s depth last season only allowed Anderson to play for a few minutes or to go in when the team already held a substantial lead. Despite Anderson’s lack of experience, Duffy said she wants her to feel more comfortable scoring.

“The thing about Tia is she just needs the game minutes,” Duffy said. “If she misses a shot or she makes a mistake, we’re not pulling you. You have to play through it and continue to embrace that new role.”

In terms of who should receive more minutes, Duffy said Anderson should be that person. In her collegiate career, the 6-foot-2 forward has yet to start a game as a Golden Eagle.

“She deserves it more than anybody, as a senior, to get that final opportunity,” Duffy said. “She’s worked so hard for three years. I’m trying to make her have a little more fun with this.”

Spingola said the current squad wants to be known for its competitiveness, cohesiveness and work ethic.

The team was ranked ninth of 10 in the preseason poll, Spingola said it doesn’t put any pressure on the team to live up to last year’s expectations.

“Nobody really knows what team we’re going to be,” Spingola said. “It’s going to be fun just to prove (to) everyone every day how good we are.”

Duffy said she only has one requirement for Anderson and Spingola in their last season.

“Your senior year you want to have a lot of fun and you want to do it the right way,” Duffy said. “I know they’ve had so much success. But I want them to have some success in their new roles and understand the impact they have everyday on this team with their voice and their leadership. Have just the mentality of, whatever happens we’re going to have a whole lot of fun doing it.”