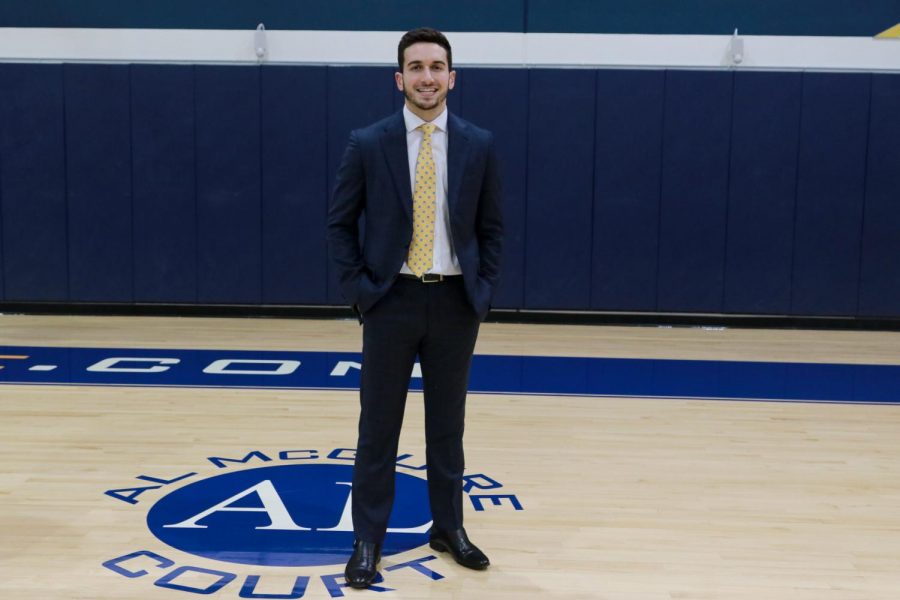 Cam Marotta was a walk-on with the men's basketball team from 2015-'19. This season he has a different role as program assistant.

While March 9, 2019, was Cam Marotta’s last time suiting up for the Golden Eagles, he soon returned to Fiserv Forum to assume a very different role: program assistant.

Thus far, Marotta said it has been a seamless transition.

“I still get to be around our guys, but obviously I’m on a little bit of a different side of things with our coaching staff now, helping them get stuff ready for practice, get stuff ready for recruiting and everything,” Marotta said. “It’s good to see both sides of the game of basketball.”

Some may say the Mequon, Wisconsin, native was destined to be a Golden Eagle. His great-grandfather, grandfather and late father all played Marquette basketball, and his mom was an MU cheerleader.

“Seeing him on the coaching staff now is amazing and a blessing,” redshirt senior Ed Morrow said. “Just knowing how committed he is and how he wears that blue and gold, especially with his father (having played) and his mother being here.”

For four years, Marotta donned his father’s No. 52 under head coach Steve Wojciechowski. As a walk-on, he played in 28 career games.

He graduated with a degree in marketing in 2019 and is now pursuing a master’s degree in management at Marquette.

“He’s the type of person that we hope all our guys grow into being,” Wojciechowski said. “He adds a fresh and youthful perspective to our staff, and our players really get along with him. He’s going to be a great coach.”

Marotta said competing with players like current seniors Markus Howard and Sacar Anim and redshirt sophomore Greg Elliott in past seasons helped him gain a level of respect from them.

“They understand what I’m telling them comes from a good place. I like to just try to help them get better on a day-to-day basis,” Marotta said.

Although he was a walk-on and didn’t play as much as other players, Marotta took on a leadership role for younger players.

“He always felt like a coach because he was always out here telling us what to do — not what to do, but the right things to do,” Elliott said. “(To) see him from a coach’s perspective, it’s not really that much of a difference. It’s just I know he’s not running with us any more, that’s really it.”

In 2016, Marotta received Marquette’s Dwyane Wade Legacy of Leadership Award and in 2019, he was presented with the Father William Kelly Team Morale Award.

“As a walk-on, especially as I got to my junior and senior year, I tried to become more of a player-coach,” Marotta said. “I do have a lot of similar roles as I did as a walk-on, I just don’t have to run as many lines now.”

For Anim, Howard and John, having a former teammate on the coaching staff is “weird.”

“There’s definitely some questions where you’re like, ‘I don’t know if I should go to him about that,’” John said. “But then at the same time … he’s still our guy.”

Howard said it’s fun to see Marotta develop as a player and now as a coach.

“It’s definitely a position that he’s perfectly fit for,” Howard said. “But I’m just so used to being on the same team as Cam.”

Regardless of Marotta’s title, his former teammates said they are happy for him.

“I’m so proud of him just to see where he comes from. I know that was one of his dreams,” Anim said. “At first to put the jersey on, but now to be able to coach for a great university that he loves. I respect him, and I’m glad to have him on staff.”

Around Fiserv, Marotta is now known as “Coach Cam.” Players say the moniker is more a joke than anything.

“(I) call him ‘Coach Cam’ a lot just to mess with him,” Morrow said. “Give him that extra little jolt to make him feel like he’s somebody. … At the end of the day I look at him as a brother. He’ll always be Cam to me.”

Meanwhile, Marotta’s younger sister Chloe joined the family’s Marquette legacy in 2018, as a forward for the women’s basketball team. She said she and Cam are extremely close.

“We’re best friends,” Chloe said. “When I wanted to commit here, that was definitely one of the factors that I looked at.”

Even now, Chloe said she can spend just as much time with Cam as when he was playing. She said they still eat dinner together in the training table room, which they did last year.

But Chloe said her favorite part about having her brother still around is that Cam keeps an eye on her progress.

“There’s sometimes when I’m working out in Kasten and he’s up in his office, and they have a camera on the Kasten Gym (practice facility),” Chloe said. “Every single time he comments on what kind of moves I’m making, how my shot looks, just cause he’s watching from the office.”

With five years and counting at Marquette, Cam said he is lucky to still be with the program.

“(I’m) very thankful to Coach Wojo for keeping me on as a staff member now,” Cam said. “It’s really been a home for me for life.”

Although Cam and Chloe’s late father Marc, the only three-time First Team Academic All-American selection in program history, died from a heart attack in April 2015, Cam said his dad would be proud — a sentiment that Chloe echoes.

“My dad would be very, very proud, especially of Cameron,” Chloe said. “He has had coaches’ knowledge from the time he was little. My dad would know that he would be a coach right now, and I think he does know, but he would be really proud of him as well.”