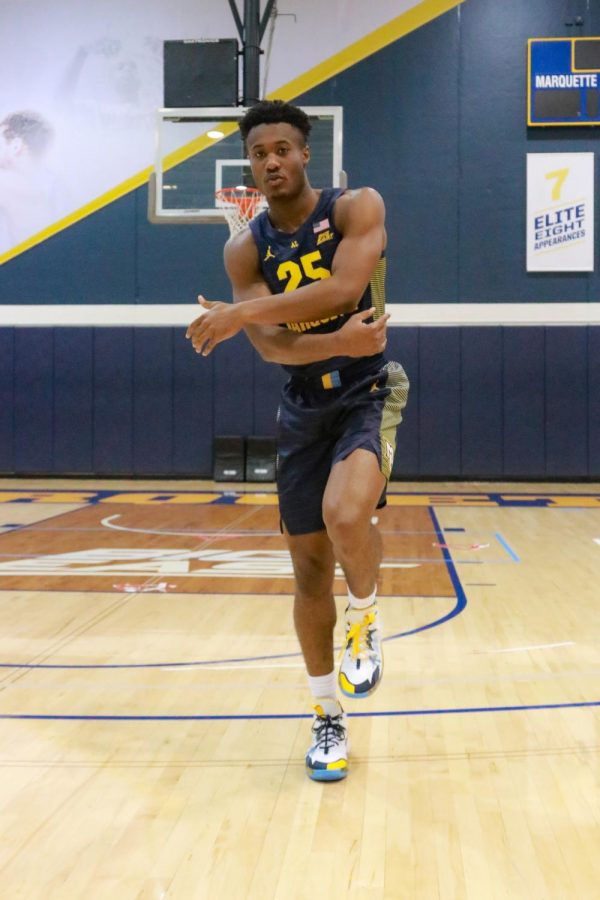 As Marquette begins the 2019-’20 season, Markus Howard will have a surplus of guards by his side.

Both Koby McEwen and Greg Elliott were a part of Marquette’s program last year, with McEwen redshirting after transferring from Utah State, and Elliott redshirting because of an injury. The pair joins freshmen Symir Torrence and Dexter Akanno and senior veterans Sacar Anim and Markus Howard in a crowded backcourt.

In 2018, Howard took on most of the pressure handling, passing and shooting in the backcourt. This season, there’s confidence around the team that redshirt junior Koby McEwen can take some of that pressure.

Wojciechowski said McEwen is comfortable running a team himself and making decisions or playing off the ball.

McEwen spent all of last season on the scout team for Marquette, helping Marquette prepare for other teams’ star players. Howard saw how McEwen fit with the team once he stepped on the court.

“I am extremely ecstatic to play with a guy like Koby,” Howard said. “He’s so versatile, he can drive into the lane, make plays for others and score for himself. I’m looking forward to be able to have different areas we can attack from.”

Howard said he believes both him and McEwen can play well on- or off-the-ball, so they can both attack the defense as a facilitator or capitalize on scoring opportunities for themselves.

“Playing with Markus makes the game easier for everybody,” McEwen said. “He’s an up-tempo guard, runs the floor and he’s improving as a decision maker and passer. I look for him a lot because I know he’s going to make the shot and get me an assist.”

In addition to McEwen’s game complementing Howard’s, Wojciechowski said he loves McEwen’s competitive spirit and the “edginess” he brings to the floor.

Meanwhile, Elliott missed all of last season with a thumb injury.

“It’s really good to see Greg back out on the court,” Wojciechowski said. “He’s a high IQ player, really easy to play with, makes the people around him better, and he’s a great teammate.”

With Elliott being healthy and back at practice, he is also competing for minutes.

“Competition is always going to be good amongst the guards,” Elliott said. “It’s good that we’re going at each other because iron sharpens iron, so the more we compete in practice, the more we’ll be prepared for the season.”

McEwen said Elliott “looks like the old Greg,” and he will be a big help as another ball handler.

“My role is to do whatever my team needs me to do so we can win,” Elliott said. “I’m not just an offensive scorer or a defensive stopper, I can do both. I pride myself on that.”

The two newcomers to the group are Torrence, a 6-foot-3 guard from Syracuse, New York, and Akanno, a 6-foot-4 guard from Valencia, California. With all the guards on the team, Wojciechowski said the team will “look at all options” when it comes to potentially redshirting one of these freshmen, but he wants them to attack each day like they’re competing for a starting role.

“Dexter has great size, he’s a tremendous athlete and he’s shown flashes of who we think he can be,” Wojciechowski said. “Symir is a true point guard, pass first guy, potential to be a great leader down the road and he makes the right plays, which you don’t always see from young guards.”

With the young guards coming in, some of the more experienced guards have done their part to integrate them and help with the transition.

“I’m always there for them. Whenever they need something, they know they can just ask me,” Elliott said.

Elliott described Torrence as a “floor general” with great passing skills and the ability to knock down open shots. Elliott said Akanno is built like a running back, and he’s a blur in the open floor with the ability to get to the basket whenever he wants.

“I try to challenge myself everyday,” Torrence said. “There’s nothing but competitiveness with the guards. We’re going at each other every single day, and we all just want to win.”

Torrence said he believes the offense will look different between this season and last year, and that right now they are a guard-dominant team. Although they have tremendous power forwards and centers, and the guards need to be able to get downhill so the big men can get open.

“All of our newcomers are guys who can come in and help us,” Wojciechowski said. “They will not only be able to help Markus, but really our entire group, and they’ll help us get easier baskets due to their playmaking abilities.”