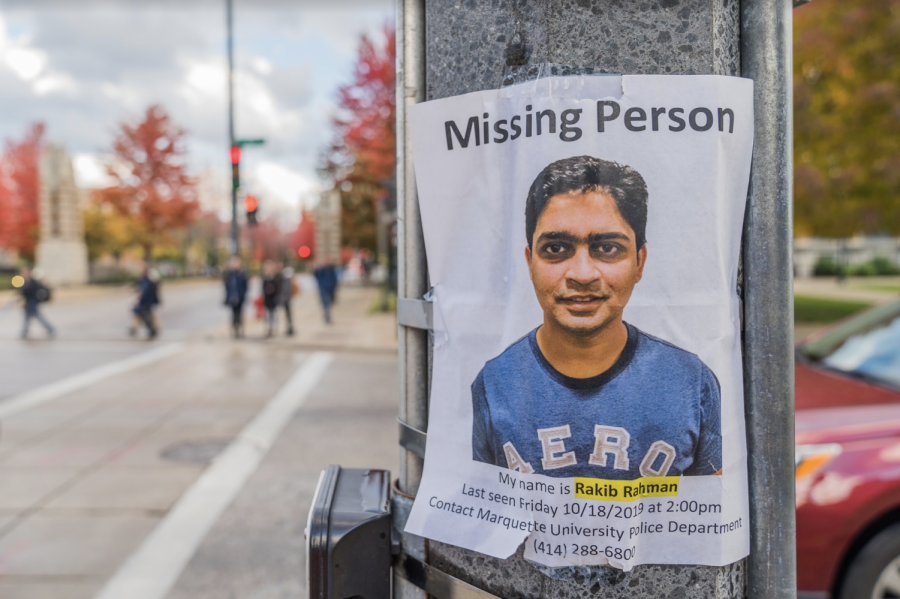 Graduate engineering student Rakib Rahman, who went missing Friday afternoon, returned to his family Wednesday healthy and unharmed, according to a statement from the Marquette University Police Department.

Rahman, who is originally from Bangladesh, went missing near his apartment in the area of 17th and State streets. Rahman’s classmates said his wife, whom he lives with, is staying in the United States on a dependent visa and relies on her husband for income.

The student’s classmates, also from Bangladesh, surveyed the area in efforts to locate Rahman and hung flyers with his picture.

“We are so happy that he is back home now,” graduate engineering student Protap K. Mahanta wrote in an email. “We thanked God that he is safe and healthy. We didn’t meet him yet as we would like to give him personal space with his wife.”

MUPD said it does not believe criminal activity was involved in the student’s disappearance.

“That was based, in part, on the information we were receiving from the community,” MUPD Assistant Chief Jeff Kranz said.

In a statement, MUPD thanked individuals who provided tips on the student’s whereabouts.

“Due to the nature of what occurred, we did not get a lot, but the ones that we did get were able to assist us and lower the level of concern,” Kranz said.

The department said it takes missing person reports seriously and investigates the cases “thoroughly and professionally.” Kranz said some MUPD detectives and officers were solely focused on Rahman’s case.

The department said it is glad the case resulted in a positive outcome.

“I was very happy to see that,” Kranz said of Rahman’s return.

Rahman asked for privacy for himself and his family following his return, MUPD said in a statement.