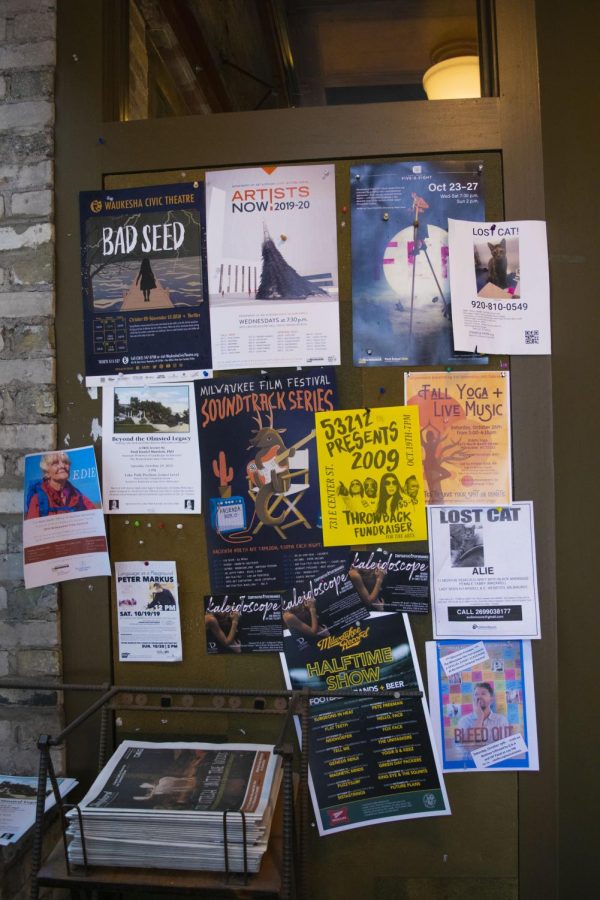 Some locations have bulletin boards and racks of flyers that provide promotional opportunities for local events.

Picture this: You open the door to a local coffee shop. Warm air mixed with the aroma of coffee envelops your senses as you step in from the chilly autumn air. A crowd is gathered around a stage. People sway to acoustic guitar music underneath strands of fairy lights as they sip on lattes and drinks from a bar.

Scenes like this can be found in Milwaukee at a handful of coffee shops that double as venues for concerts and events.

One of the city’s most well-known coffee shop music venues is The Back Room @ Colectivo, 2211 N. Prospect Ave. The Back Room is a part of the Pabst Theater Group and provides a professional-level venue for traveling and local artists and other events.

Nick Ouchie, cafe manager at the Prospect Avenue Colectivo, said The Back Room provides a chill, relaxed environment for concerts and other events. Ouchie said the venue stands out from the average cafe that offers live music.

“I will say, The Back Room’s a little bit different. I wouldn’t say it’s as similar to a lot of other coffee houses that have a stage, just in that we have actually professional sound equipment,” Ouchie said. “It’s kind of set up like a pretty legitimate venue that just so happens to be in a coffee shop.”

Molly Stark, a senior in the College of Arts & Sciences, has attended three different concerts at The Back Room. She saw alternative/indie band Bad Bad Hats and singer-songwriter Josie Dunn two summers ago, and then saw Dunn again this past summer.

Stark has attended concerts at larger, more traditional venues like The Rave, Fiserv Forum and The Pabst Theater. She said while the ideal venue depends on the performer, she personally prefers smaller venues like The Back Room.

“I think a coffee shop’s a lot more intimate. I feel like the artist kind of talks to the crowd a lot more, and a lot of times the artist is just starting up, so it’s exciting for them to see all these people come out to see them, and it’s a big deal to them,” Stark said. “I think it keeps it cooler when it’s more personal and you get to know who they are more and more about what their songs mean.”

Stark said other advantages to seeing artists at small coffee shop venues are cheaper tickets and the chance for fans to personally speak with the artists after the show. Stark met Dunn both times she saw the artist perform.

Another popular coffee shop venue is Anodyne Coffee Roasting Co., 224 W. Bruce Street, in Milwaukee’s Walker’s Point neighborhood. With an elevated stage, 40-foot bar and open floor plan, Anodyne serves as a venue for a variety of private and public events, from concerts to weddings to discussions.

Anodyne’s events calendar is usually packed. Event director Erica Karls said the venue is normally filled Thursday through Saturday, and nearly every Saturday of the year is booked with a wedding.

The coffee shop requires little transformation to shift from a regular coffee shop by day to an events venue by night.

“It’s a pretty warm and inviting environment, so it doesn’t take too much to spruce it up and make it special,” Karls said. “We’ve got a lot of exposed creme-colored brick and exposed wood beam and the smell of coffee helps.”

Regardless of the event or type of music played, Anodyne offers great sound quality, Karls said. She said Anodyne’s owner installed sound pads on the walls and speakers around the café to improve the sound quality and to evenly distribute sound.

Graham Bowerman, a junior in the College of Business Administration, has performed with a band at Anodyne.

No stranger to the spotlight, Bowerman has been playing guitar as a solo act and with bands since he was about 16 years old. He has played at venues such as local coffee shops, bars, small Summerfest stages and earlier this semester, at The Rave.

“I like the gigs where I’m in a bar and I’m jumping around and having a lot of fun playing rock music, slamming my electric guitar. That’s my favorite type of gig. I like to play with people, to be able to share that,” he said. “I was playing a lot of acoustic gigs this summer, and it’s just not as fulfilling because it’s just you. You’re making money, but ultimately it gets kind of boring as a musician because you’re not sharing that art, that music and interaction with other musicians.”

However, when it comes to being an audience member, Bowerman said he favors smaller, more intimate venues.

“I think a lot of people, especially if they’re really indie-hipster coffee-shop-type people, they like smaller venues. They like where there’s a little more interaction with the artist,” Bowerman said. “Because when an artist gets big, I mean, you are on the third floor seeing Justin Bieber at Wrigley Field, it’s less personal than if you’re hanging out with a band and you’re part of it.”

For more information about events at The Back Room, visit bit.ly/TheBackRoomCalendar. Anodyne’s event calendar can be found at bit.ly/AnodyneCalendar.