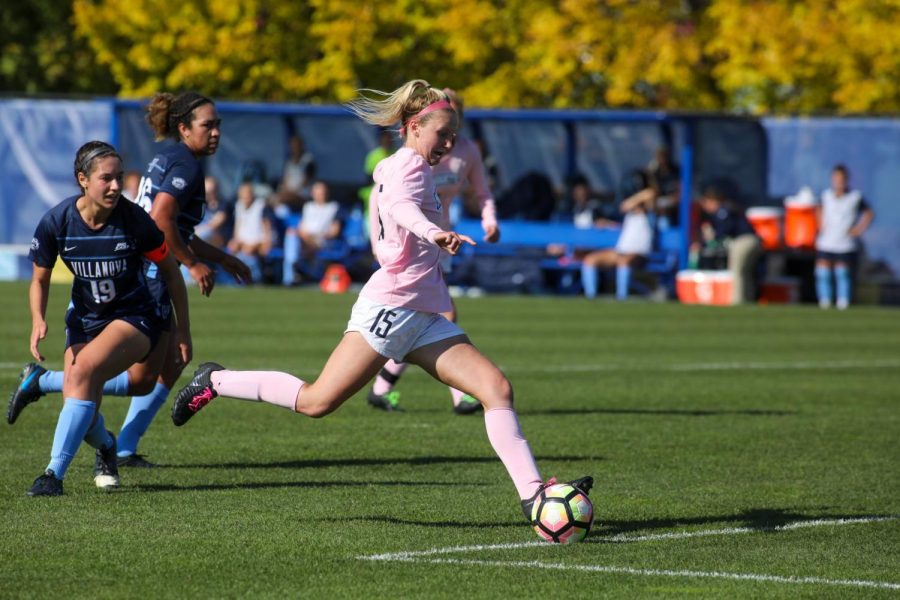 Alyssa Bombacino kicks one of her three goals in Marquette's 3-1 win over Villanova Oct. 20 at Valley Fields. (Photo courtesy of Marquette Athletics)

Marquette women’s soccer took down the Villanova Wildcats (7-5-3, 3-2-1 BIG EAST) 3-1 Sunday afternoon after a week off, extending its winning streak to three games.

“Really happy for our team. It was an exciting match,” head coach Markus Roeders said. “So many players contributed. It was not just one player. Really proud of our effort. We had to adjust a little to their style, but it was then all about taking advantage.”

For the second straight game, Marquette’s offense started out firing in the first half.

In the 27th minute, Villanova sophomore midfielder Brice McInroy was called for a foul, leading to a Marquette free-kick around midfield.

Sophomore defender Madison Burrier put a strong foot on the free-kick and found sophomore midfielder Alyssa Bombacino in the box, who got her foot on the ball and fired it past Villanova goalkeeper Rebecca Gartner.

In the 56th minute, Villanova graduate student forward Sam Rosette cut the Golden Eagles’ lead to 2-1 with her fourth goal of 2019.

Villanova defender Kristin Barbour had an opportunity to tie the match in the 63rd minute on a penalty kick, but Marquette senior goalkeeper Maddy Henry saved it. Villanova took another shot on the rebound, but it bounced off the crossbar.

It was one of Marquette’s many big defensive stops Sunday.

The defensive line has been a strength of the team this season with leaders like Henry, Emily Hess, and Bri Jaeger. Roeders said the entire team came up big defensively in Sunday’s win, though.

“End of the day, it is about defending by committee,” Roeders said. “It is all about communicating. Just listening to the players. This was the best we have communicated all year.”

For the second straight game, Bombacino completed a hat trick in the win. Her final goal came in the 64th minute.

“Making it 3-1 allowed us to settle down a little,” Roeders said. “(Bombacino) gets herself in the right spots. I think she has a certain level of calmness and composure when she gets in those moments.”

Bombacino has a team-high seven goals this season, six of which came in the last two games.

In the past three games, the Golden Eagles offense has exploded, scoring 11 goals.

Roeders and Bombacino said they see their hard work on offense coming together.

“It is really exciting for us to get a lot of these goals since it was a struggle early on,” Bombacino said. “We are more of a threat.”

“We sometimes didn’t get all the results and success early on. Attacking and scoring just take some time to develop throughout the season. I am happy for our team,” Roeders said.

Henry finished with a game-high nine saves and allowed just one goal.

MU earned its ninth all-time win against Villanova since joining the BIG EAST and now holds an all-time series record of 9-2 against the Wildcats.

Sunday afternoon’s win also marked the 100th win for the Golden Eagles since they joined the BIG EAST in 2005.

The Golden Eagles now move into a four-way tie for fourth place in the BIG EAST with DePaul, Providence and Villanova. The top seven teams are within four points of each other in the conference standings.

“We have to continue to be stingy with our entire group, getting behind the ball, playing good defense … and that will build up our attack,” Roeders said. “Have to keep everything going forward.”

Marquette (6-8-1, 3-2-1 BIG EAST) will return to Valley Fields to take on the Xavier Musketeers Thursday at 7 p.m. The Golden Eagles will then finish the regular season on the road at Butler Oct. 27 and DePaul Oct. 31.

“We are excited, and this (win) is going to help us. Xavier is a really tough team, and I think just going forward it will help us as well,” Bombacino said.