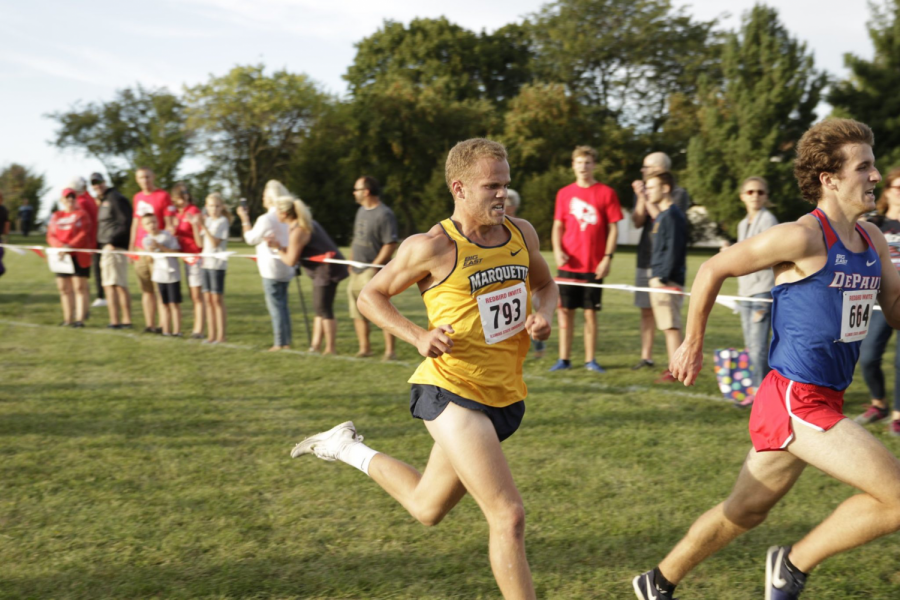 Greg Van Hollen is freshman from Barrington Illinois. He finished 51st at the Illinois State Invite Sept. 13. This past weekend he finished fourth at the Bradley "Pink" Classic in the white race. (Photo courtesy of Marquette Athletics.)

The meet was split up into “white” and “red” races. Many of Marquette’s top runners competed in the “red” race.

All seven men’s runners in the white race placed in the top 25. Freshman Greg Van Hollen led the Golden Eagles and finished fourth overall with a time of 25:44.8.

On the women’s side, sophomore Mary Rose Flood placed first overall out of 106 runners in the women’s white race. The rest of the top five were sophomore Emily Noone, redshirt junior Sophie Bolich, junior Emma Moravec and freshman Anna Penzkover, who all finished in a span of two minutes. All MU runners scored personal-best times.

In the men’s red race, Senior Ryan Burd placed fourth overall in the race with a time of 24:17.05, with Daniel Pederson finishing just behind him in fifth. Burd missed his personal best time by five seconds.

Senior Caitlin McGauley continued to lead her team with a personal best time of 21:27.00 and a 13th place overall finish in the women’s red race. Junior Emily Foley reached a personal best as well at 21:48.2 and coming in 21st.

Head coach Sean Birren said in a statement that they’re going to “cut back the intensity” this week in order to rest up and be ready for the BIG EAST Championship.

“With this being midterms week and us having a lot going on, I could see the effects in some of the scores,” Birren said. “We need to take care of ourselves and make sure we’re ready to compete at the best of our abilities in a couple of weeks.”