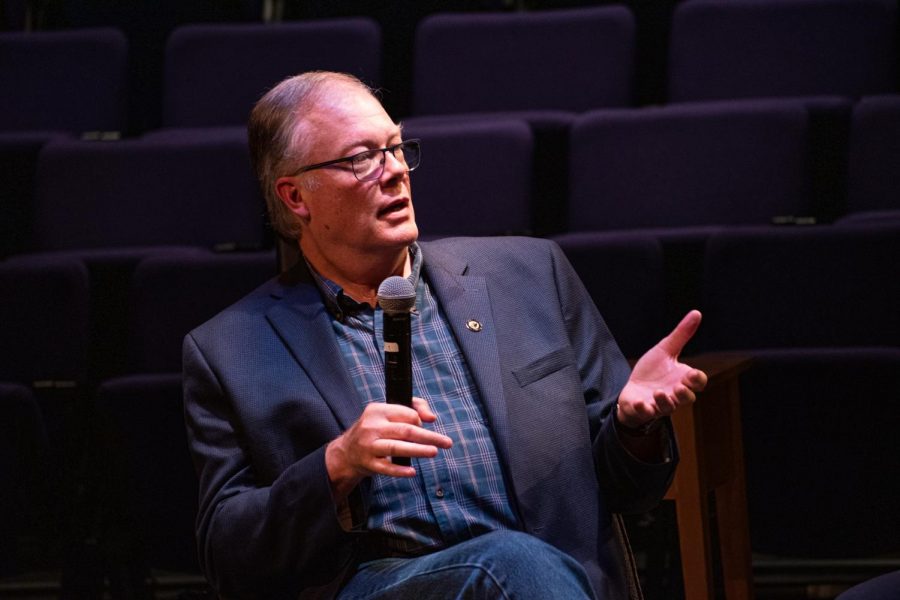 The panel featured James Marten, department chair and professor of history at Marquette.

For its production of “The Niceties,” the Milwaukee Repertory Theater’s Leah Harris said she planned to emphasize audience conversation. Though she was not part of organizing the theater’s season, Harris, director of the Rep’s ACT II community engagement program explained her enthusiasm about the conversation possibilities the story opens up.

ACT II is responsible for facilitating discussions about shows with complex or contentious themes. Harris described ACT II topics as things “that are going to provoke you and ask you to lean into those more controversial topics.”

Previous themes that ACT II has facilitated conversations over have included mental health, the Ferguson shootings and gun violence.

This time for “The Niceties,” running at the Repertory Theater through Nov. 3, ACT II tackles racism and historical biases, and “how we’re telling (history) and aren’t telling it.”

Set in 2016, the drama’s plot centers on Zoe Reed, a student of color — played by Kimber Elayne Sprawl — and her intense dialogue with her professor Janine Bosko — played by Kate Levy — over Zoe’s paper on the exclusion of African Americans from the Revolutionary War. Through complex discussion, the two characters quarrel over their understandings of who tells America’s story and how their identities fit into it.

ACT II held a post-show panel Oct. 11 featuring James Marten, professor and chair of the Department of History at Marquette, alongside two other panelists. Besides Marten, the panel featured Emilio De Torre, the ACLU of Wisconsin director of community engagement and Amanda Seligman, a professor of history and urban studies at the University of Wisconsin-Milwaukee.

Part of the reason Harris said she was enthusiastic about this panel was its thematic relevance to academia.

“I wanted to connect to universities (because of the play’s subject matter),” Harris said. “In the show’s second act, (the production) dives into how academia’s systems have been problematic to marginalized communities,” she said.

“The relationship between a professor and a student is reciprocal,” Harris said. Even though the play is high-stakes and intense, she said she hopes it opens some doors for how we view those relationships.

She said the Rep’s connection with Marquette provided a great opportunity for students to get involved in this conversation.

“We’re doing a program on campus … at the beginning of November, a couple of days after the show closes,” Harris said. “Marquette professors have been inviting their students to come see the show during our College Nights with discounted ticket rates … (and have been) asking them to put together their own reflections.”

Harris said the organization’s core beliefs and values include providing engaging and entertaining — but also provocative — art that makes audiences think beyond their own world views.

Carly Christensen, a student of Levy who gave a short pre-show talk, said she was challenged by “The Niceties.”

“I’m questioning my own behavior and how I am (as a white woman) … good and bad, so it resonates (on that level),” Christensen said.

When the curtains closed and the lights dimmed, the standard pre-show etiquette disclaimer said to react appropriately if so moved. “Throw (tomatoes) if so moved,” an audience member whispered to himself.

Throughout the first half, laughter was not always universal, occurring when jokes were not made or in response to dead air.

At intermission, Nick Caputo, a sophomore in the College of Business Administration, said he was on the edge of his seat and that he did not know what was going to happen.

The panel was supposed to include a fourth panelist, Taylor Barnes, a senior at Rufus King International Baccalaureate High School, but Barnes was unable to attend due to illness. Barnes was the only person of color invited as a panelist.

Marten said the story of “The Niceties” hit close to home.

“(I feel like the student and I) are talking past each other,” Marten said. “(I’ve had it happen where) you have a student who you don’t know why they’re talking this way. … What I realize for African Americans, Native Americans (and many others), is this isn’t history, this is life. (In a way), we’re all historians.”

Seligman had a different response to the story. She took the issue with the play’s notion that Bosko is a prestigious professor at an accredited institution, yet is as closed-minded about Reed’s research as she is portrayed to be. “Transformation has happened and people are writing about race in history more often than ever before,” she said.

“Anyone can actually be a historian now,” Seligman added. “The problem for historians in the 21st century is justifying why our opinion matters.”

Circling back to his earlier point, Marten said he found it “interesting that, in the play, (Bosko) is thinking about jobs (and) Zoe is thinking about life … and that’s how they’re talking past each other.” He also said there is “not much of an appetite for history because we’re all doing different things (with our lives).”

De Torre posed a question about whether it is academia’s responsibility to be accessible, to which Seligman said many conversations have been happening. She said this is because of many professors feeling like they are “squeezed out” by an “austerity culture” in academia.

“They are also being asked to do much more with much less,” Seligman said. “We have aspirations, but academic structures can be limiting.”

Marten also responded. “It’s a lot of burden to put on a professor for the whole story to be on them,” he said. “This is the current we’re swimming against.”

Seligman concluded her opinions by saying Bosko “still was a plausible portrayal of a professor,” but one who would not be a respected scholar.

In the panel’s audience question segment, Maaz Ahmed, a sophomore in the College of Communication, countered Seligman’s stance.

“In discussing how (history scholarship) is not accurately portrayed here, I feel like we’re losing that discourse,” Ahmed said. “This piece’s (goal) is to understand our own implicit biases.”

Marten addressed Ahmed’s point, saying history is about research and memory. He explained the latter is a loaded topic for race in America because cruelty erased many records. “You’re right, we shouldn’t get caught up in those details,” Marten said.

A member of the audience raised her hand, saying that she works at a public school and still sees “mostly white men” teaching history about which they have little knowledge.

Marten and Seligman agreed with her. Marten said it is easiest to teach big events like dates, whereas social history is much harder. Seligman said access to authentic history for people of color is “hit or miss.”

Pia Russo, a sophomore in the College of Education, offered her own response. Being an undergrad in history, theater and teaching, she said there has been a lot of talk of change — of getting away from “powerful white men” history — but she said one of her history classes barely talks about people of color. She went on to say the history of people of color is made to feel like not much more than a “fun tidbit” compared to the “real” history: white history. To her, her class effectively downplayed the significance of the history of people of color. She ended by saying it is not one person’s fault.

As the panel ran out of time, an audience member criticized its members’ complexion, saying that the historians both being white and the fact there was only one person of color on the panel says a lot about the play’s relevance.