College of Education holds rally on the importance of education 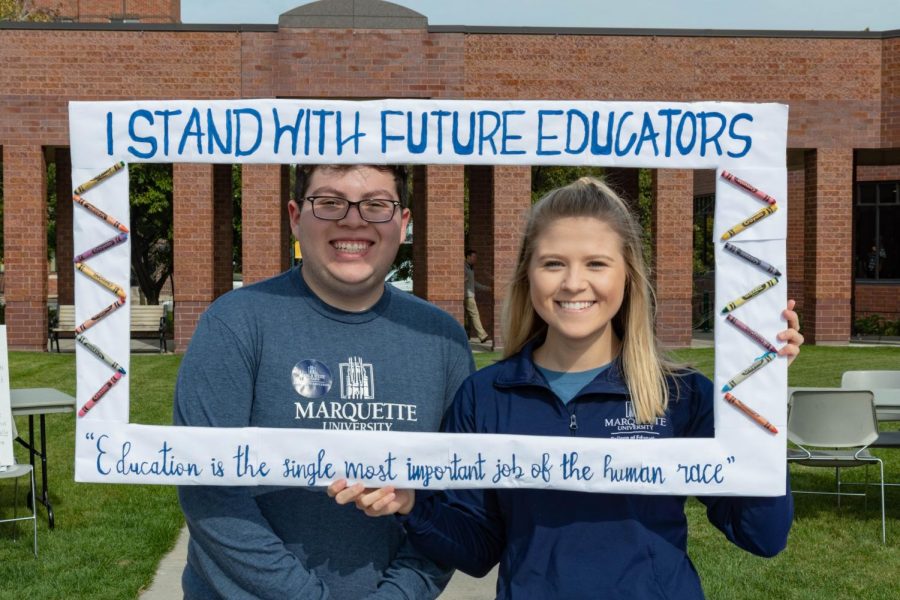 Last month, Marquette University administration announced the future of the College of Education was uncertain. Ever since, students have fought back.

After students in the college hosted a forum, they organized a demonstration that focused on the importance of education, held Oct. 10 outside the Alumni Memorial Union.

“Everyone was moved to show their voice and to make their opinions known,” McArdle said about the forum.

Gryniewicz said she heard rumors about things changing within the college, so she attended the student forum. She said it was scary hearing the different possibilities.

“It’s very powerful being in a room of so many people who are so passionate about it, including myself,” Gryniewicz said. “We’re all very passionate about education, because none of us are in this profession for a paycheck.”

Jablonowski said she attended the demonstration to raise awareness about the college’s situation.

Gryniewicz said because the college is so important to its students, they want to continue to have the resources and opportunities that they have now.

At the demonstration, students distributed flyers explaining the history of the College of Education and the advantages it has. People passing by also could sign a banner in support of the college.

“The theme of our demonstration is that education is important, which is a blanket statement, but it’s relevant not only to the College of Education, but also to Marquette and where Marquette stands as an educational institution,” McArdle said.

McArdle said the students are looking at the urgent need to justify the college’s programs, what current students are accomplishing and how they’re impacting the university.

“Education is a central theme to Marquette as a university and Jesuit ideology, which we’re supposed to be subscribing to, so we’re really looking at how education is devalued by the actions of the administration,” Jimenez said.

Jimenez said the point of the demonstration is to form a dialogue with students, faculty and other facets of the university to increase communication and transparency.

Students have also signed an open letter to the university administration, which now has nearly 400 signatures.

The letter cites Marquette’s Guiding Values, and the university’s commitment to “educate students who are men and women for and with others.” The letter states that becoming a teacher exemplifies these ideals.

Two demands made in the letter call for transparency from the university and the solicitation of student input on decisions regarding the future of the College of Education.

“What’s interesting about (the signatures) is that there are certainly a lot of College of Education students that have signed it, but there’s a ton from Nursing, Business Administration (and) Arts & Sciences,” Jimenez said.

Going forward, McArdle said she is attempting to get a group of students together to talk to acting provost Kimo Ah Yun about the issue. She said an “individual, personal conversation” would be better able to address the students’ needs. She said Ah Yun has been very responsive so far.

“He seems to be open to meeting, but we’ll see,” she said.

Jimenez said he wants to see more transparency from the university.

“The conversations are still happening, and now we’re actually being notified of them happening. I still wish there was more (transparency),” Jimenez said. “As of yet, I haven’t seen the administration reach out to students in any capacity.”

Overall, students involved in the demonstration and the open letter said they want people to be aware of the situation.

“I hope (Marquette) sees our passion,” Gryniewicz said. “We are the smallest college on campus, but I don’t think you’ve met 300 more passionate people in your life, because we are all so dedicated to what we’re doing. I hope they see how important it is, and to see the impact that teachers and education have.”

A previous version of this article said the education demonstration took place on the Central Mall, instead of outside the Alumni Memorial Union. The Wire regrets this error.