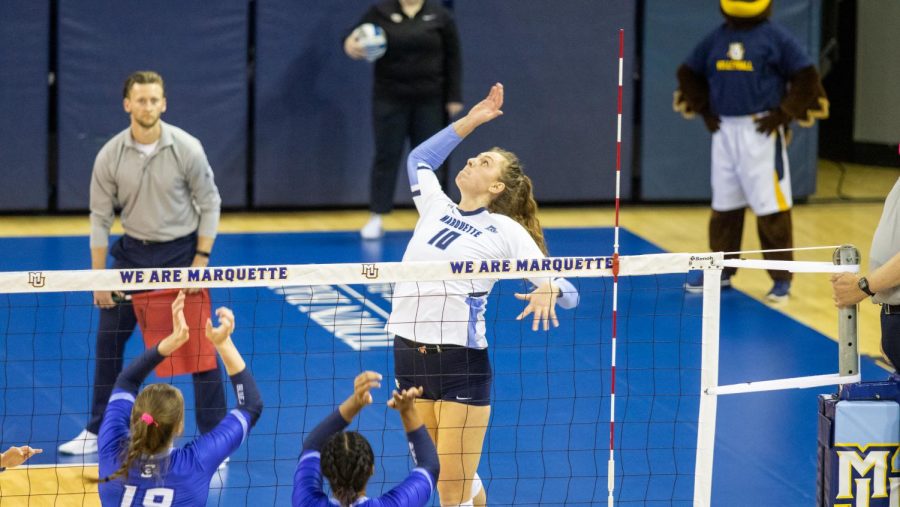 Allie Barber (10) attempts a kill in Marquette's 3-2 loss to Creighton. She led the Golden Eagles with 18 kills Friday night at Villanova.

“It was just a really good team performance tonight,” head coach Ryan Theis said. “There were two huge points where kids stepped in and did their jobs, and it was awesome.”

Marquette got out to a slow start in the first set.

“(There were situations where junior) Martha (Konovodoff) was in position to make a dig, dug it a little low, the second touch went nuts,” Theis said. “We overpassed a ball we normally don’t, they went to throw it out of bounds, (senior Allie) Barber touched it. It was just little things right away weren’t making sense and clicking.”

But after a timeout by Theis, the Golden Eagles turned it around and took the frame 25-22.

After gaining some separation halfway through the third, Marquette pulled away and took the final frame 25-19 for an easy sweep.

“All our hitters were pretty comfortable (in the third),” Theis said. “Everybody had confidence. We were at two tough spots and (junior) Sarah Rose threw up terrific sets. She took a bad situation and made it better twice in that game, and that helped us pull away.”

As a squad, Marquette hit 0.364 while holding Villanova to a 0.210 hitting percentage.

“(Georgetown) can score, and if they play low-error, they’re a handful,” Theis said. “We’ve gotta use some physicality and have to limit their ability to produce points.”