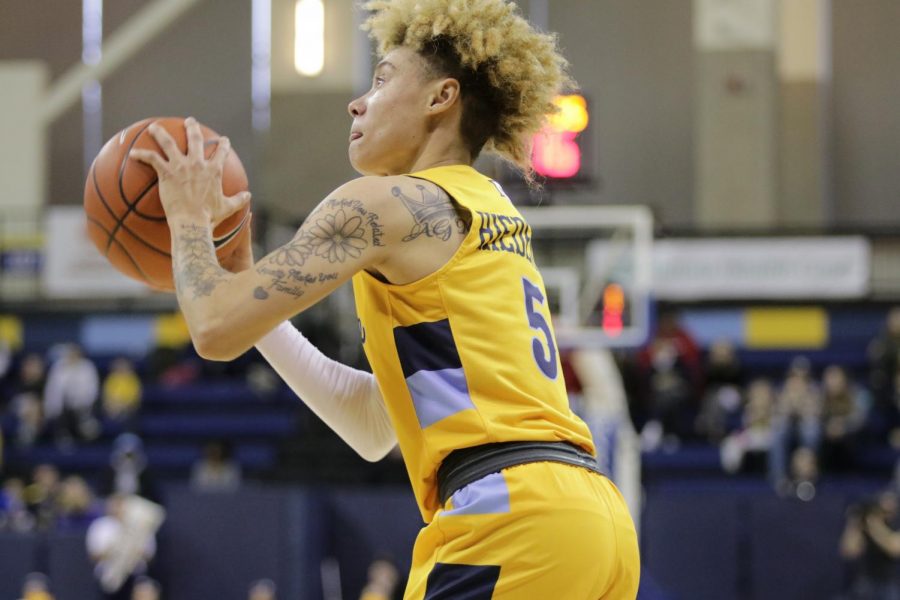 Natisha Hiedeman, a senior at the time, attempts a shot against Providence at the Al McGuire Center.

Six months ago, Natisha Hiedeman didn’t know if she’d be able to play in the WNBA.

Now the former Marquette standout and 2019 BIG EAST Player of the Year said she is “mindblown” as she looks ahead to playing in the WNBA Finals with the Connecticut Sun Tuesday.

Hiedeman’s appearance in the Finals, while usually limited to a couple minutes per game, has been one of many firsts for the Marquette women’s basketball alumna.

“I just want everybody to see that Marquette is on the rise. Marquette is an elite program,” Hiedeman said. “Me being the first, I just want to pave the way for everybody that goes to Marquette. I want them to believe in themselves and know that they can do exactly what I’m doing.”

The perks go far beyond the basketball court. Anyone with a copy of NBA 2K20 can play as Natisha Hiedeman. The popular basketball video game added WNBA rosters for the newest edition of the game.

“Oh yeah, that’s dope. That’s the dopest thing ever,” Hiedeman said. “It looked just like me, too. It’s crazy. … I only play with Connecticut.”

“You’re in the game with all the greats,” Hiedeman said.

However, she’ll be the first to admit that she has some work to do to improve her rating in the game. 2K rates her as 73 overall on a scale up to 99.

“It’s going to keep going up,” Hiedeman said. “We’re working on it.”

The Green Bay, Wisconsin, native’s journey to the professional ranks has hardly been easy. While at Marquette, she went from losing her first four collegiate games to winning BIG EAST Player of the Year as a senior.

“It was go time,” Kieger said. “It was time to step up and make some changes in her game, and she absolutely did that. She bought in (to team’s plan) and obviously had a tremendous senior year.”

The transition to the professional ranks hasn’t been easy either.

“Everybody on the floor is elite (in the WNBA),” Hiedeman said. “Not only that, but it’s just different schemes. You have to learn different things, different terminology.”

After the Minnesota Lynx drafted her and traded her to the Sun, she didn’t make the cut for the regular season roster.

She later joined the Atlanta Dream, teaming up with Marquette alumna and Dream head coach Nicki Collen. She never saw game action in a Dream uniform, but she felt more confident after learning under Collen.

“Coach Kieger was my first female coach, and Nicki Collen was actually my second female coach,” Hiedeman said. “She just gave me a boost of confidence. … She was so confident in everything she was doing.”

Hiedeman’s path came back to Connecticut in July, rejoining the Sun.

“I was like, ‘Alright, I’m back home, let’s get it,’” Hiedeman said. “I was literally on a plane the next day back in Connecticut. … This is where I felt like I belonged since the beginning.”

She averaged 10.2 minutes per game in 20 regular season contests with the Sun while shooting 46% from 3-point range. At the same time, the Sun has felt increasingly like home to Hiedeman.

“Transitioning from college to here, it’s nerve-wracking. You don’t know what exactly to expect,” Hiedeman said. “When I first got here, every single person had just welcomed me with open arms and helped me so much along the way.”

As Hiedeman experiences her success, her former coach is closely watching.

“It’s pretty special. I know she’s through the moon, and I know she’s having the time of her life,” Kieger said. “Whenever you have a player and somebody that’s close to you be able to do that, it’s pretty remarkable.”

Hiedeman said she has talked with Kieger every day via text message or FaceTime.

“She’s a big part of my success and the reason I’m here,” Hiedeman said. “So that’s a lifelong (relationship) right there.”

Whenever Hiedeman finishes a game, she can expect a message from someone on Kieger’s Marquette staff.

When the Sun lost 94-81 in Game Three of the WNBA Finals last Sunday, Kieger was in the crowd watching.

Kieger hasn’t played as Hiedeman yet in 2K, but she said she’s excited to see Hiedeman in the game and to see her WNBA jersey for sale at Fanatics, an online sports apparel retailer.

“Oh, (Hiedeman’s jersey) is going to get framed, don’t you worry,” Kieger said. “I have to get that signed first.”

Now Kieger has her sights set at seeing another alumna get an extended stay in the WNBA. Allazia Blockton earned a training camp contract with the Chicago Sky but did not make the final cut.

“She definitely deserves to be in the league,” Kieger said. “She can play with the best of the best. … I have zero doubts that she will make it at some point as well and hopefully after this year.”

Blockton was a prime candidate for the WNBA until an ankle injury during her senior year provided a major setback. She missed about three weeks of the season.

“That ankle really set her back,” Kieger said. “She’s battled her way past (the injury) and is on her way to doing something special with her career as well.”

As Blockton goes for the WNBA, Hiedeman has another thing on her mind — a new album. While she was at Marquette, she and teammate Amani Wilborn created “Fly With Us,” a song to go with the 2016 team introduction video.

After the WNBA Finals, she’ll spend the offseason playing overseas like many other WNBA players. It requires a stop in a recording booth, though.

“I haven’t really been telling anybody … but it’s going to be a whole album coming in a few months,” Hiedeman said. “It’s going to be my little overseas task.”

Before that, she has a more pressing task: Game Four of the WNBA Finals Tuesday and potentially a Game Five Thursday.