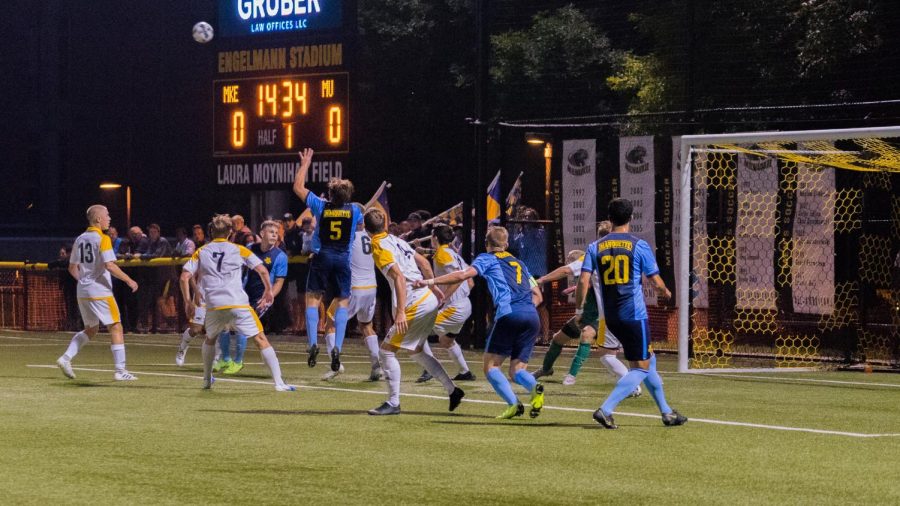 “It’s a mentality to be able to take care of some of the important details about recognizing when you’re on the road,” head coach Louis Bennett said. “To win two (in a row) on the road has been a rarity.”

“The main reason for our success on the road is having (a) strong start versus (Wisconsin),” senior defender Patrick Seagrist said. “It’s an in-state rivalry, and our very first road loss against Milwaukee was hard to take in, so we knew we weren’t going to let that happen again.”

(We) have been able to take that energy and use it in a positive way,” Bennett said. “We had some key moments on the road last year, but not consistently.”

Bennett said regardless of the outcome, the team still takes a lot away from road games.

“Sometimes there’s a lot made of going on the road and not being able to win,” Bennett said. “You can distinguish that by putting the emphasis on doing the little things that make you successful.”

Although Marquette has found improved success on the road this season, senior midfielder Luka Prpa said the team realized its potential last season in the BIG EAST Championships.

“In the past … we’ve gone on the road and played well, but we haven’t necessarily come away with the win,” Prpa said. “We’re a little bit more experienced this year, and we know if we stick together and everyone does their job, we’re confident we can get a good result anywhere.”

The team has scored at least one goal in every away match so far this season, averaging two goals per game on the road.

Bennett said the team took nervousness and turned it into energy while taking fewer risks on the road.

For Marquette, the most difficult aspect of being away from home is the logistics, whether it’s the travel or not being able to sleep in one’s own bed. Bennett and the players use this to their advantage as a way to come closer together.

“A lot of the things are beyond your control, but there’s a better understanding, better bonding,” Bennett said. “Some of the negatives you can use as a positive. The better teams do that — they create their own familiarity with being on the road.”

Prpa said the team usually arrives a day before each road match so they can get familiar with the field as well as their surroundings while also bonding with games like Mario Kart.

“The minute we leave (Milwaukee) we’re always together,” Prpa said. “Every trip we have, everyone grows that much closer together, and that translates onto the field.”

Seagrist said the players are not allowed to be on their phones when they are together.

“The coaches do a good job of keeping our minds on controlling what we can and not worrying about the rest,” Prpa said.

MU will be tested again on the road with a stretch of important away games coming up against BIG EAST opponents.

“It’ll be crucial games for us,” Bennett said. “We’re certainly happy with the last two times we’ve been away. On the flip side, the home games … we’ve disappointed. I don’t think we’ve had that edge in the last couple of games.”

Although Marquette has struggled recently, Bennett praised what the team has shown so far this season and look for continued success against Green Bay Tuesday.

“This group has done a much better job of being organized and using that extra time to be closer and tighter,” Bennett said. “Teams that play on the road have to be resilient in soccer.”