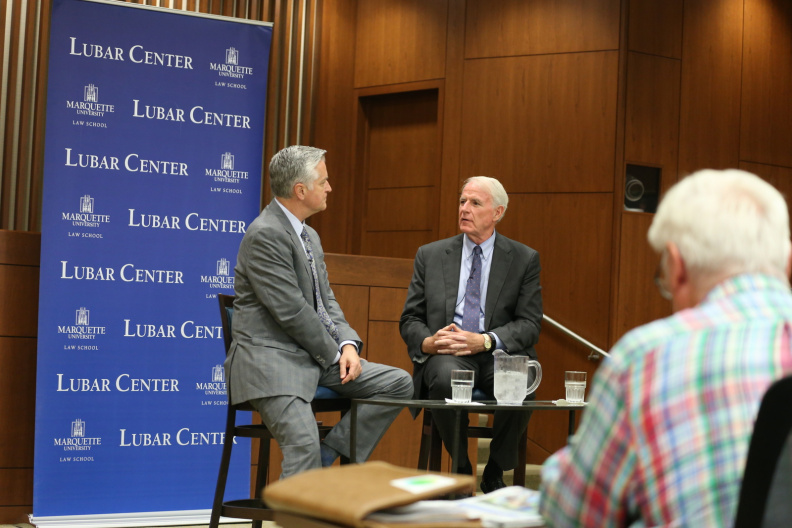 Milwaukee Mayor Tom Barrett made an appearance last Tuesday at Eckstein Hall for a segment on the local interview series, “On the Issues with Mike Gousha.”

Barrett discussed a wide variety of obstacles and opportunities facing the city in the near future including the imminent 2020 budget, the lead crisis and the upcoming Democratic National Convention.

If the proposed 2020 budget passes, the Milwaukee Police Department would subsequently lose 60 positions as a result of retiring individuals not being replaced.

This substantial cut is the result of Milwaukee’s policing budget exceeding the entirety of the city’s property tax revenue for the fifth consecutive year. Additionally, city officials are speculating a major rise in annual pension contributions from $70 million to an estimated $160 million in the year 2023.

With these growing costs and no new sources of revenue, the mayor explained even deeper cuts would ensue in budgets to follow 2020.

“Our financial situation has never been so precarious,” Barrett said.

In an effort to pay for rising expenditures, the mayor has advocated for a county sales tax increase of 1%. Barrett acknowledged that gaining the support of a Republican-controlled state legislature and the local business sector would be difficult. However, Barrett also drew upon endorsements like that of Tim Sheehy, president of the Metropolitan Milwaukee Association of Commerce – the largest business lobbying group in the region — to conclude that such an increase is possible.

Concerning the lead crisis, Barrett made the distinction between the lead paint issue and the lead piping issue.

Though the city of Milwaukee recently received $5.6 million in federal grants to aid in the removal of lead paint, the matter of lead piping remains largely unresolved. The mayor explained that because other Wisconsin cities, including Madison and Green Bay, already or are currently managing similar problems with lead independently, the state legislature has been hesitant to intervene on behalf of Milwaukee.

Barrett pointed to the already fragile budget and urged for change.

“If you love this city,” Barrett said, “We must find a way to fix this issue.”

Regarding the upcoming Democratic National Convention, Barrett’s tone was optimistic. The convention, set to take place in mid-July 2020 inside Fiserv Forum, will be the first ever DNC to be held in Wisconsin.

The mayor said he hopes the DNC will foster a surplus of new opportunities beyond immediate economic benefits from an event of its size, such as national exposure and tourism.

“To be bipartisan,” Barrett said, “I would even love for Milwaukee to host a 2024 Republican Convention.”

Barrett was also asked to comment as to whether he supported reappointing the current Chief of Milwaukee Police Department Alfonso Morales, as his contract is set to expire.

“Homicides are down. Robberies are down. Carjackings are down,” Barrett said. “I support the chief.”

Despite the vast number of topics covered by the interview, some members of the audience still believed there were critical issues left out of the conversation.

Monica Reida, a first-year law student at Marquette, was one such person.

“I wanted to see a discussion about environmentalism and making Milwaukee more sustainable,” said Reida. “That really didn’t happen.”

“I’m all for improvements downtown but … the mayor needs to focus on our neighborhoods — especially our diverse neighborhoods,” Milwaukee native Karen Negle said.

In recent years, Barrett has focussed extensively on downtown development and has spent billions in doing so. As a result, his tenure has overseen the greatest construction boom in the city since the 1960s.

Though Barrett has taken strides to revitalize struggling urban areas by encouraging businesses to relocate adjacent to lower-income neighborhoods, poverty rates within the city still remain high, especially among minorities.

Within Milwaukee county, the poverty rate among Hispanic individuals is around 18.5% while the rate among African Americans is even greater, around 30.3%, according to the Wisconsin Poverty Measure. Both figures far exceed the poverty rate of the state which falls to about 10.8%.

Barrett, who was first elected mayor of Milwaukee in 2008, will be facing reelection for a fourth term in 2020.