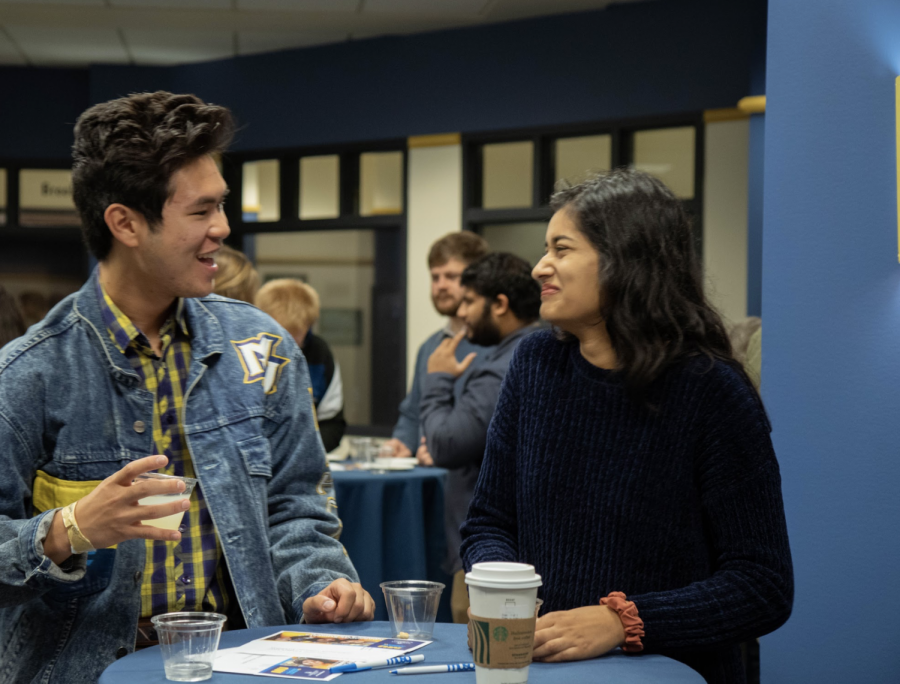 MUSG celebrates its 100 year anniversary with a block party.

To celebrate 100 years of Marquette University Student Government, the organization held a block party from 11 a.m. to 1 p.m. over Homecoming weekend.

“I think it is … a really unique opportunity to connect with old alumni … being able to share the experience of student advocacy and student government but then being able to tell the story of how we are doing it in so many different ways,” Manjee said.

Executive Vice President and senior in the College of Arts & Sciences Dan Brophy agreed and said he was excited about talking to alumni because there is not a lot of connection between current students and past MUSG members besides the older students he knew from his past years.

“I think it (was a) really cool, really unique and a really beneficial learning experience to be able to chat with some MUSG alumni and see what it was like when they were here versus what it is like now,” Brophy said.

Eighty alumni were registered for the event. Manjee said MUSG worked with University Advancement and reached out to alumni to let them know about the event.

Manjee said the anniversary is not only a wonderful time to celebrate, but a time to evaluate how they can serve more students and revamp current practices to make them work better for Marquette and students.

Over Manjee’s three years on MUSG and Brophy’s four, they have both seen improvements in how student government runs. Brophy said it has gotten better at collaborating internally with all of its different departments, and also building and maintaining relationships with the different people they work with at Marquette, including student organizations, individual students and university departments.

Manjee said MUSG used to have a structure where members would seek out student concerns, and they would be the ones to tell the administration what students were saying. Now, it is a more collaborative process in which students are keyed in for every step of the way.

“We are trying to build that and solidify that and lay the foundation for years to come so it is a norm for MUSG 100 years from now to work with students every step of the way,” Manjee said.

In the past, MUSG has helped advocate for changes such as co-ed dorms, street safety and bubbler bikes, Brophy said. He also said that without MUSG on campus, there would be no central body for students to rely on to advocate for them.

Madison Hicks, MUSG programs vice president and senior in the College of Communication, said that she met some of her best friends since joining MUSG, and she learned about her passion for programming from it. She said MUSG has so many layers, and students do not have to be part of MUSG to be impacted by it.

Manjee said MUSG wants to help students find something that anchors them to their success at Marquette.