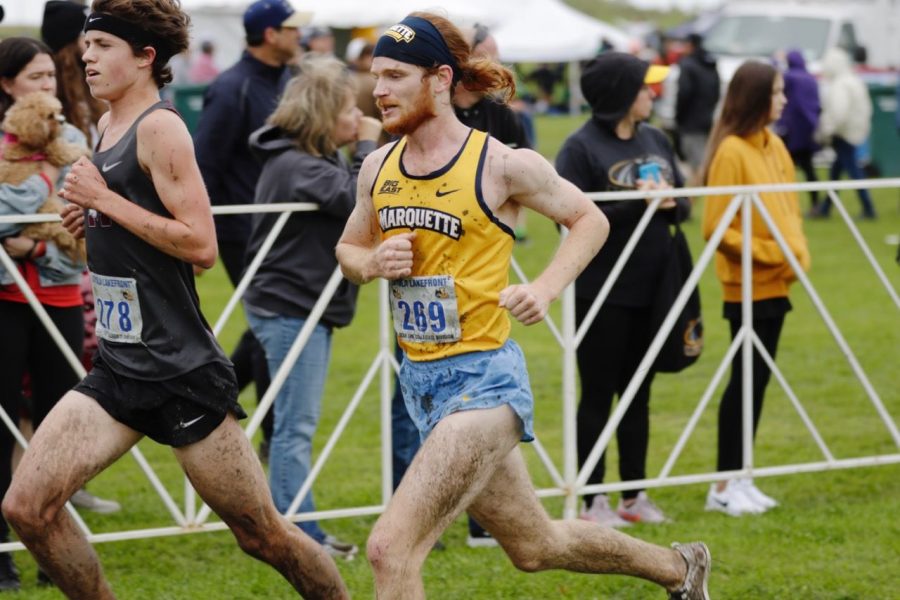 While many runners may dread courses with muddy conditions like the Loyola Lakefront Invitational, senior runner Daniel Pederson thrives in them.

“It’s no secret, the messier the conditions, the better it is for Daniel,” senior teammate Brad Eagan said. “There’s a reason we call him ‘spoon’, he’s used to running in the mud out in the wilderness.”

Another reason his teammates call Pederson “Spoon,” is because he is from Spooner, Wisconsin.

At Loyola, he finished first in a field of more than 125 runners.

“It was kind of a slugfest, muddy and wet type of day (at Loyola),” Pederson said. “I tend to like those environments while other runners tend to struggle with it.”

Pederson’s leadership has gone beyond just running well in difficult conditions. The senior was BIG EAST Cross Country Athlete of the Week last week along with fellow MU runner Caitlin McGauley, and he has finished in 12th place or better in each race of 2019.

“He’s a leader on the team and he’s really stepping into that role,” interim head coach Sean Birren said. “He has the talent to be the best athlete in any of the races he puts himself in.”

Pederson, Eagan and Birren all agreed that Pederson earning BIG EAST Cross Country Athlete of the Week is a great recognition for both Pederson and the program as a whole.

“We do not typically get recognized in cross country on the conference scale,” Eagan said. “It was really cool to see (Pederson) as well as (McGauley) get recognized. It gives our team a ton of confidence in the type of work we’re putting in right now and what we’re capable of.”

“It’s cool for the rest of the conference to see Marquette get two athletes recognized,” Pederson said.

The runner sent another message to the conference by following up his top place finish with an 11th place finish out of 370 runners at the Greater Louisville Classic Saturday in Louisville, Kentucky. He led the Golden Eagles with a time of 23:57.3, his personal best.

Pederson was quick to redirect focus away from his own accomplishments to the team’s overall success.

“As a leader I want to keep people encouraged and focused,” Pederson said. “I want everyone to have a resource to reach their own individual goals as well as the team goals.”

He said it’s been an easy team to lead because everyone knows what they should be doing and what’s going on.

The respect Pederson has for his teammates is mutual. Eagan said Pederson is really showing his talent this season.

“We all know ‘Spoon’ is an absolute maniac on the course,” Eagan said. “We know he’s capable of those fast times, and we know we can always rely on at least two of him, myself and Ryan Burd to come through if not all three of us.”

Pederson won’t be dwelling on his prior accomplishments, either. The team’s next competition is the Bradley “Pink” Classic Oct. 18.

“It’s a blessing to win a race. Not everyone gets to experience that,” Pederson said. “But you have to keep looking forward, and accept the ups and downs as they come. It’s a long season.”