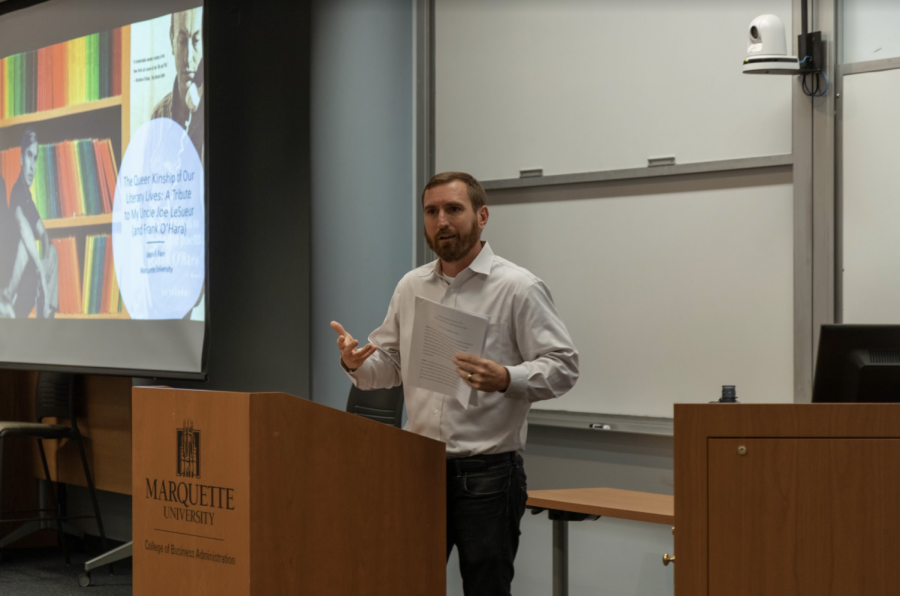 Marquette University’s Gender Sexuality Alliance sponsored an event in honor of LGBTQ+ History Month this past week in Straz Hall.

The keynote speaker was Marquette assistant professor of English Jason Farr. He focused on the historical aspects of the LGBTQ community and centered his presentation around his relationship with his Uncle Joe, who identified as queer.

Danielle Del Conte, a junior in the College of Engineering and GSA President, organized the event. She said planning the event began last spring, when the GSA knew they wanted to host a speaker on the LGBTQ community. The treasurer of GSA was in one of Farr’s classes, LGBT Narratives.

From there, she said it all came to fruition.

“We reached out to him in August, and (we) basically said he could talk about whatever he wanted,” Del Conte said. “He ended up having an amazing story to tell about connecting with his uncle through queer literature, and it ended up being exactly the sort of engaging speaker that we wanted to host. We couldn’t be happier with how well the event turned out.”

In his presentation, Farr described how his Uncle Joe inspired him as a member of the LGBTQ community, and how the poet Frank O’Hara played a major role in his uncle’s life.

Farr said that after coming out as queer in 2001, he wanted to meet with his Uncle Joe to discuss what his life was like being a part of the LGBTQ community.

However, Farr was never given the chance as his uncle passed away in 2000. While this was a major setback, Farr ended up finding a connection to his uncle in a different way — through writing.

Farr found out that his Uncle Joe was an author after coincidentally discovering a book written by his uncle in a San Diego bookstore. Farr said he was able to find out a lot about his uncle’s life through various literary works.

Farr realized a whole new realm of knowledge about who the person he grew to adore was. He shared similarities with his uncle, including a passion for writing.

His Uncle Joe’s life included time spent in New York, Salt Lake City and Los Angeles. Joe arrived in New York in 1949 before moving into an apartment with Frank O’Hara in 1951. Over the course of the next 10 years, Uncle Joe and O’Hara would live in four different apartments together until 1965, when O’Hara was killed.

Farr said that Joe longed to be a writer and ultimately fulfilled his dream. After describing his uncle’s life, Farr noted his own journey and its similarities with his uncle as his guided inspiration.

Farr said the 1969 Stonewall Uprising was especially vital to the history of the LGBTQ community as it was a courageous rebellion against police brutality. The event occurred in Greenwich Village in New York City when police raided a gay club. Farr wore a 50-year-anniversary Stonewall LGBTQ pin acknowledging the event’s importance. The stone is said to be unmovable as it represents how the legacy of the LGBTQ community has continued.

In one of his uncle’s pieces, “The Unmentionable,” Farr’s uncle hinted about HIV/AIDs, referring to a mysterious ailment that killed people as “the gay cancer.”

Farr also spoke about how he met his Uncle Joe only once in 1988 when he was nine years old. The main memory he realized from the encounter was his observation that Joe was dissimilar to the other men of his family.

Farr said his uncle left a lasting, powerful legacy as a member of the LGBTQ community. He has numerous written pieces to his name coinciding with O’Hara and two famous paintings depicting him which were painted by famous visual artists Alex Katz and Chamberlain Wynn. The works or art are worth hundreds of thousands of dollars.

Brandon Prince, a sophomore in the College of Arts & Sciences attended the event.

“I thought it was very good. An intriguing story that shows how crazy life can be. It’s really cool how you can still know others through writing,” he said.

Following the conclusion of his speech, Farr said he thinks LGBTQ history gets overlooked and is often undervalued.

“There are many blanks and holes, and we need to turn our attention to preserving it so that future generations can access important historical events pertaining to LGBTQ,” Farr said.