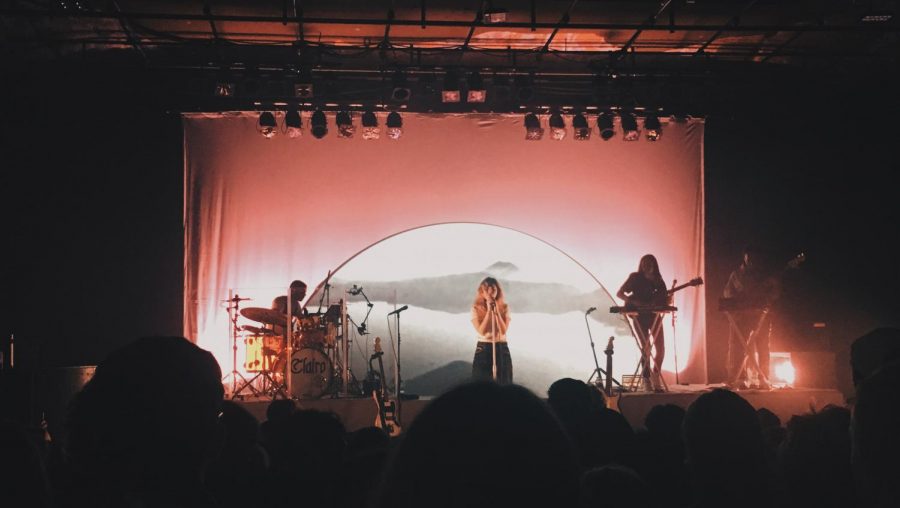 This was my first show at the popular Milwaukee venue, and it did not disappoint. The audience was lively, youthful and full of anticipation for the performance to start. Getting there early, I was able to catch the opening acts: Mellow Yellow, and filipino alternative band Beabadoobee. In fact, though few fans noticed, main act Clairo herself watched and sang along to the two supporting groups while hidden in the balcony.

Although I was not familiar with the opening acts prior to their performances, each did a great job at setting the mood for the night.

Opening band Mellow Yellow was the first to take the stage with grunge-garage vibes which kept the audience energized and excited. With long guitar riffs and drum solos, Mellow Yellow stayed loud and entertaining.

For the second act, Beabadoobee softened the mood with some dreamy tones and soft vocals. The trio emitted romantic melodies, which was comforting on such a rainy night. With what appeared to be a larger fan base, Beabadoobee had audience members echoing back lyrics of its more popular songs such as: “Disappear”, “1999” and “If You Want To”.

In the end, Clairo took the stage, and fans erupted with enthusiasm and activity. Wearing casual jeans and a tee, Clairo was confident in her environment. Clairo opened with some hits from her newest album “Immunity” to which the crowd knew every lyric. Being her first time in Milwaukee, Clairo was sure to leave her audience wanting more. With smooth transitions between songs, she let her fans sink into jazzy tones of emotion and color. Prior to the finale, Clairo giggled onstage, mentioning how a fan asked her to prom. Though she didn’t give her response to the “promposal,” she had the crowd overjoyed when performing an encore of her popular hits, “4Ever,” “Pretty Girl” and “Are You Bored Yet.”