Blue and Gold Runs in the Family 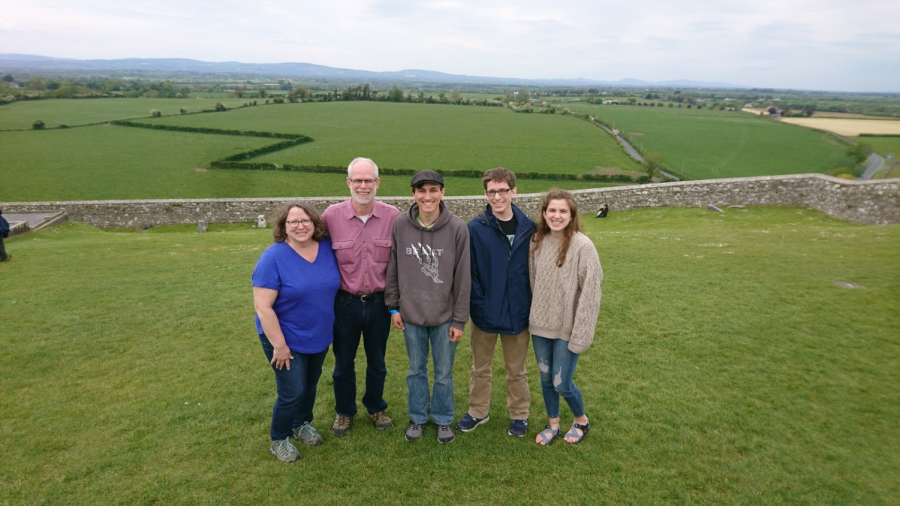 The Eddinger family went to Ireland to visit Jack (middle) during his study abroad semester.

At the Freshman Frontier Program they attended the summer before their first years at Marquette University, the two were paired up as partners, started dating in January of their freshmen year and the rest is history.

For Terese, class of ’89, going to Marquette was natural because she had family attend too.

“I had an older brother and sister who went there, so I would go visit them, and I realized that Marquette was the school for me,” she says.

For Bob, it was the best option as it was not “too far from home but far enough.”

From meeting significant others to having generations of family attend Marquette, family connections are everywhere on campus.

After marrying, the Dysart’s three children, Ryan, Annie and Lily, all decided to come to Marquette. They grew up noticing how much their parents enjoyed their time at school, which impacted their decisions when it came time to choose a university of their own.

“I have been going up to Marquette for basketball games and other events, pretty much as long as I can remember,” Ryan, who graduated from the College of Arts & Sciences in 2018, says. “By the time my college visits rolled around, they offered us a tour but it was pretty much just a formality because I felt like I already knew everything about it. I like to say I started the trend among my siblings.”

Lily Dysart, a junior in the College of Arts & Sciences, says she didn’t want to go to Marquette because her family had, but eventually, she says she came around.

“I realized how good of a school Marquette was and it kind of felt like a home away from home,” she says. “I was just like ‘you know what? We’re just going to send it, we’re going to go to Marquette.’”

Similar to his parents, Ryan met his fiancé, Grace, at Marquette.

Among the Dysarts are the Eddingers, whose family finds a home away from home at Marquette too.

Thomas Eddinger, a biology professor and director of undergraduate studies for biology, has been working at Marquette for more than 20 years.

“Seeing how much he cares about his students and how much work he puts in, I know all of my other professors are doing the same,” Jack says.

Normally, the three see each other on campus frequently. Last year, Jack had a job in the biology department where he would see his dad often. Now, Albert has that job.

“But, you can pretty much just pop into his office whenever and say ‘hi’, which is really nice,” Jack says.

For Albert, taking a class taught by his dad was always something he looked forward to.

“Ever since I was a kid, I always thought it would be a cool idea if I could go where my dad taught and then I could just walk into my class and like, ‘there’s my dad, as a professor’…,” Albert says.

Inherently, Marquette was always on Jack’s radar because of his dad.

“Then I came and I learned about a lot of cool innovations on campus … and that seemed really cool to me,” Jack says.