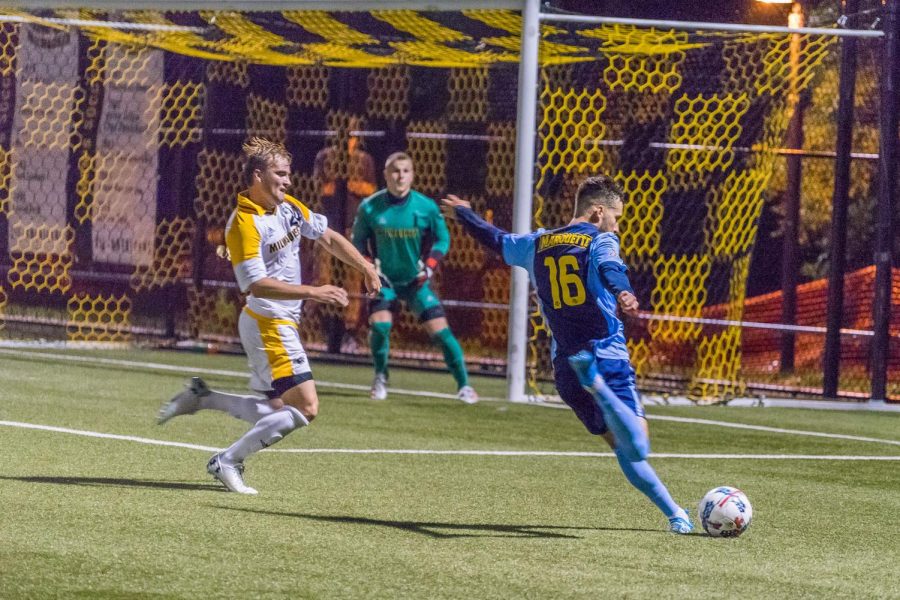 Marquette's Josh Coan (16) attempts a goal in the Golden Eagles' loss to UWM at Engelmann Stadium.

With a trip to the BIG EAST Championship on the line last year, it came down to penalty kicks in two overtime periods between Marquette and Creighton, the regular season conference champion. A miss meant at least one more round.

“That was just a super special moment for me to score that penalty after missing one,” Coan said.

He said it’s probably his favorite moment of his soccer career.

Coan has had his best year at Marquette, leading the Golden Eagles with four goals and is tied for fifth in the nation with shots on goal per game as of Sept. 30.

He attributed some of his success to his offseason regimen, which was aimed at improving his shot accuracy.

“Just a lot of repetition, taking shots from areas that I find myself in the game a lot,” Coan said.

During the summer, Coan and senior forward Connor Alba spent a lot of time at Valley Fields together practicing finishing drills. Coan and Alba are similar players playing opposite each other and bouncing ideas off each other, Coan said.

He said the two were living in or around Milwaukee but were playing for a team in Chicago. They drove about 90 minutes south every day to train but said they wanted more time on the field than what the Chicago team scheduled.

“We felt like we wanted more repetition and more practice too, so we would come down to Valley all the time, early morning or late night and (practice) finishing,” Coan said.

According to Coan, the practices with Alba have paid off.

Coan has already scored more goals this year than in all of last season. Along with leading the team in goals, he is one of five players with at least one assist so far.

Bennett said the ability for Coan to get free from the defender and get in the right place on the field with enough time to score has been more important than the improved shot accuracy. This comes through either ball movement, change of pace or a shift in direction.

“He played well last year,” head coach Louis Bennett said. “I think this year he’s managed to be a little bit more assertive. … If he gets that separation, the defender is in trouble.”

When Coan is at his best, Bennett said he is elusive.

“He’s almost like a ghost,” Bennett said. “You know he’s there, but you don’t know where he is — if you believe in ghosts.”

The forward attributes creating space and picking the right target to his goal-scoring ability.

“Whether it’s curling it into the far post, cutting inside or smashing it across the keeper if I go left … just kind of picking your spot,” Coan said. “Coach B. has a saying: ‘Tick tock.’”

Bennett’s “tick tock” theory is analogous for how golfers have a swing when they hit the ball. They wind the club up over their shoulders at a certain speed and swing the club down at a specific speed.

The saying is also applied to a player’s shot motion in soccer. Everyone swings back their leg and swings it forward at a certain speed. Bennett refers to this as internal tempo.

“Shooting the ball is not just about your leg strength — it’s about the transferring of weight,” Bennett said. “If you keep your internal tempo, that’s that the ‘tick tock.’”

Men’s soccer will return to Valley Fields Tuesday against Saint Louis at 7 p.m.