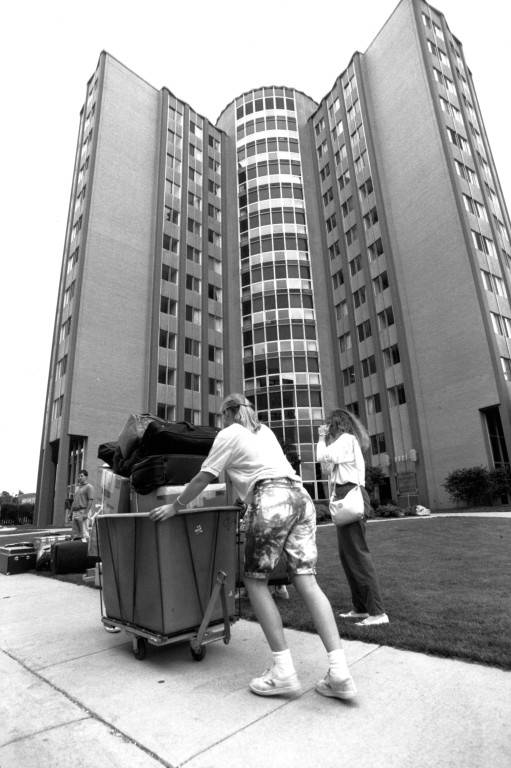 Students push bins to the entrance of McCormick Hall.

Within the three years Laura Klinger, a hall director for university apartments, has been working with Marquette University, she says she has seen numerous changes to residence life.

“We’ve seen a lot of changes and developments with the President’s beyond Boundaries plan,” she says, referring to The Commons and Marquette’s acquisition of the Marq in 2017.

To William O’Brien, a research analyst and knowledge officer for university advancement, Marquette residence halls are incredibly different from the university’s beginning.

He focuses on university history and sends weekly emails to faculty called “Old School” where he covers different aspects of the history on campus.

When Marquette opened in 1881, he says, only Jesuits lived there. All students were commuters as there were no residence halls.

O’Brien says it wasn’t until the 1950’s when Marquette started acquiring and building more residence halls.

Straz Tower, Carpenter Tower, Cobeen Hall were purchased rather than built by the university.

In the first year it was built, McCormick was simply referred to as “Dormitory One”.

Victor McCormick, an alumnus of the Marquette law school, became the namesake of McCormick Hall after pledging $2.5 million to the building — but he never actually gave the money.

The university kept the name in hopes he would eventually come through.

“For the whole of his life, even once his financial affairs became so tangled … we were hoping it would come out of his estate,” O’Brien says.

McCormick was also originally meant to be two towers, with a bridge connecting at the eighth or ninth floor.

“It would’ve looked like a big pair of binoculars,” O’Brien says.

Women’s residence halls were especially uncommon on Marquette’s campus, as women were not incredibly valued at Marquette due to a much larger male population, O’Brien says.

The Alumnae Association, which was an association for women who graduated from Marquette, owned residences of their own, such as the Alumnae House and Lisette.

Alumnae House was near where Aurora-Sinai hospital is now. The Alumnae Association used it until the 1960s.

After being used as a residence hall, it became the journalism school for about five years. From there, Marquette sold it, O’Brien says.

Peg Fennig, Class of ’53, lived in Lisette, the other women’s residence hall owned by the association. It was located at 32nd and Highland Streets, far from campus.

Since the Lisette residents lived so far from campus, Fennig says they were expected to take the bus to class. However, she says most of them hitchhiked with other students on campus.

Lisette was also a mansion, she says, with huge rooms.

“It was just incredible,” she says. “It had the most gorgeous hallway when you entered. The hallway was probably larger than many homes.”

She says living there felt magical. During the holidays, the residents decorated the hallways with garland and other decor.

“Walking down that at Christmas time … that was the most gorgeous I’ve ever felt in my life,” she says. “It was just amazing.”

She says she is still in contact with many women who lived there, and the people she met there are “friends of (her) lifetime.”

The university eventually built a residence hall for women in 1953, known as O’Donnell Hall, which remains on campus today. O’Donnell has switched from all girls to all boys over the years and became co-ed in 2016.

Lois O’Brien, a 1977 graduate says her time at Marquette was very different than what it is like now, mentioning the former underground walkways under busy streets.

“(Marquette) was a different world,” she says.