Life Beyond the Traditional Meal Plan 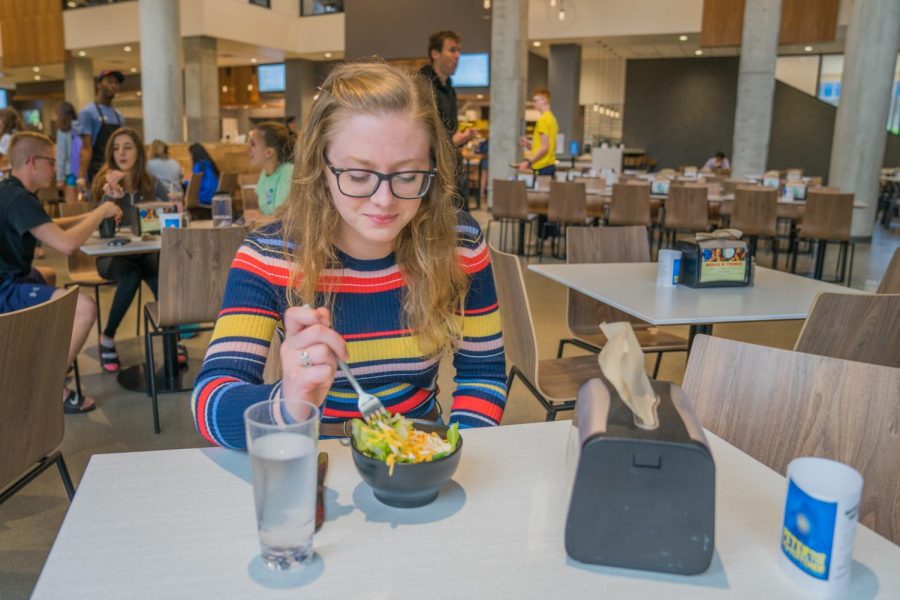 Lily Wieringa, a junior in the College of Arts & Sciences, eats a salad in The Commons' dining hall.

For most underclassmen living on campus, the meal plan provides both a variety of choices and some beloved constants. But once a student is no longer on the Anytime Dining Plan, required for everyone living in residence halls, campus diet changes.

Meggie Hart, a junior in the College of Health Sciences, moved into her apartment this past summer. She says she got used to cooking then because she had little experience before.

While Hart says she misses the convenience of having meal swipes, she says she has found it is easier to maintain a healthy diet, as she can shop for ingredients herself and easily manage portion sizes.

“I’ll have food here, but it’s not the same as late night McCormick,” Hart says, recalling the 24-hour dining hall from her freshman year that for many was a site of midnight snacks, like macaroni and cheese and chicken nuggets.

While many juniors and seniors put their days of Erbert & Gerbert’s sandwiches and “Mac and Nug” nights behind them as fond memories, some continue to reap the benefits of the meal swipe.

Lily Wieringa, a junior in the College of Arts & Sciences, still has the Anytime Dining Plan as part of her position as a resident assistant in O’Donnell.

Wieringa says she appreciates the meal plan, especially because it provides convenience in her busy schedule as an RA and allows her to interact more with her residents. Wieringa usually uses her meal plan at The Commons because of its proximity to where she lives now and because the dining hall has options that accommodate her dietary restrictions.

The one downside of being an upperclassman on the meal swipe, Wieringa says, is the fact that she rarely runs into friends she used to eat meals with. Still, she is occasionally able to share a meal with her peers.

“It can be really fun to guest swipe them because they get really excited that they’re getting free food,” she says.

Upperclassmen — as well as any other student and faculty not living in a residence hall — have the option to purchase a Loyalty 50 meal plan, which provides 50 meal swipes per semester, amounting to an average of three per week, the “Sodexo My Way” website states. Some students, like Tom Wattelet, a senior in the College of Engineering, says he relies on this option.

Wattelet, who says he is not a chef, did the math to decide how best to feed himself as a student in an apartment. He then developed a system.

“Essentially on Fridays, Saturdays and Sundays, I’m on my own for eating. … I either make something in my apartment, or I go out somewhere with friends or something like that,” Wattelet says. “And then I eat two meals a day, Monday through Thursday, there with the exception of Tuesday night, where I get the (discounted) pizza … at Papa John’s.”

He says he typically sticks to the schedule unless he has plans to go out to eat with a friend. He allows himself to spend no more than $25 — outside of his Marquette cash — on food each week.

Wattelet says he spends his meal swipes exclusively at The Commons, and he has developed his own meal plan.

“My usual routine is I go to the back corner, and there’s that nice grill over there, … (and) occasionally sometimes I’ll go over and look at the pizzas,” Wattelet says. “Once I get all the food, … I camp out by the dessert bar until they put some good stuff out there. … If I’ve got some time, I’ll sit there for half an hour waiting for some good (dessert) just to come out.”

Wattelet says he recommends the Loyalty 50 meal plan for people seeking convenience and those who tend to eat out often and rarely cook for themselves. At a price of $422 a semester, each meal costs $8.44. Wattelet says it’s rare to find a meal at a restaurant for under that price and the meal plan offers an especially good deal, considering the fact that when used at The Commons, Cobeen or Straz, guests can get numerous helpings of food.

While Wattelet advocates for purchasing a Loyalty 50 plan (or two), he says the Anytime Dining Plan is not worth the cost for upperclassmen.

Many students’ diets change throughout their college years, as they graduate from residence hall living and required meal plans to increasingly independent lifestyles marked by the need to take personal responsibility to feed themselves. Still, those that miss the Sodexo classics that characterize the meals of their early Marquette days can always reminisce with a friend’s guest pass.