A Place at the Plates 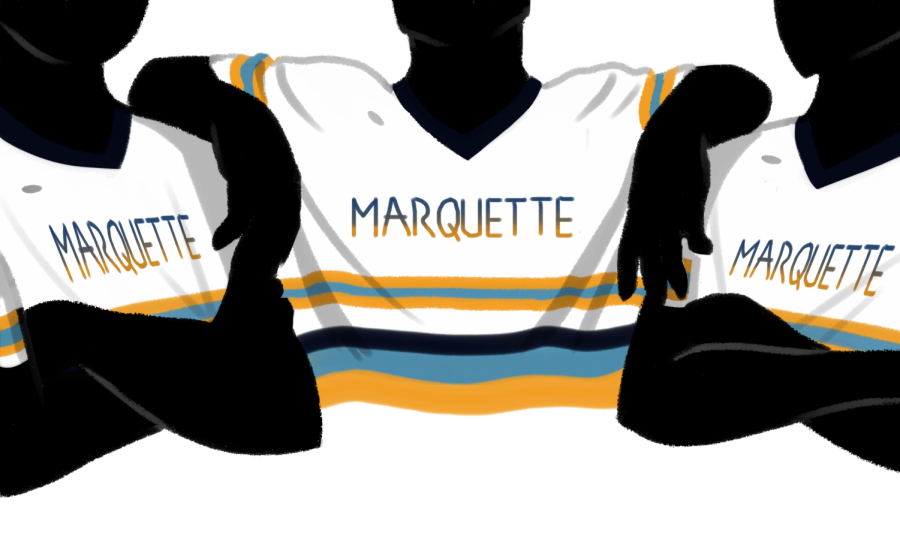 A model of the club baseball team's jerseys.

With each new semester, different club sport teams prepare and compete at Marquette University. Some teams have a couple of competitions each year while other teams travel and play year-round.

For club baseball, the season spans from tryouts at the start of the fall semester and runs to the end of the spring semester.

The team also takes a trip to Florida each year to play games against different teams from across the country. The most important game t0 senior in the colleges of Health Sciences and Education David Reske is against Madison, he says.

“Beating them is always really high on our list,” Reske says. “We almost beat them last year, and beating them this year is a goal.”

The club team will play somewhere between 30 and 36 games this year, including practice about three to four times a week. The team will spend a lot of time with one another competing, practicing and improving on the field as baseball players.

Nicholas Claxton, a senior captain for the team and a senior in the College of Engineering, says the team is making strides at becoming more of a team this year off the field.

As a captain, Claxton says he’s been trying some other things to help build the team chemistry.

“I brought a new thing this year (with) the idea of a baseball house where people can come in whenever they want to watch baseball, play Xbox,” Claxton says. “Everybody’s just closer than any year I’ve been here. Our chemistry is so much better. In practice you can tell, and just talking with the guys.”

Reske says he is grateful for the opportunity to help out the younger players as they come to Marquette for school. He says he remembers the relationships he built with older players and says he is a better leader now because of it.

“It’s a good opportunity to teach them even just about Marquette and college life. When I was a freshman, I think back to some of the seniors and juniors who were there at my time. They helped me registering for classes — they would come over and help me sign up,” Reske says. “For housing registration, I went over to (a) senior’s house which senior’s house, and he helped me register for housing.”

Past club president and present part-time assistant coach Austin Higgins recalls the camaraderie he enjoyed on the team before graduating in 2017.

“It’s just really a brotherhood. Obviously, everyone has different self-interests, everyone is different majors, but really everyone is pretty tight knit. You just know that you have a group of guys who will always have your back,” Higgins says.

As all three men say, the bonds go beyond the field. The team is there to practice, compete and get better but also to make sure nobody is left out, Claxton says.

As a freshman, Higgins clearly remembers how the team is a family.

“I remember as freshmen we would always go to our captain’s house to watch the new episodes of ‘It’s Always Sunny in Philadelphia’ because we didn’t have the FXX channel in the dorms,” Higgins says. “It’s just little things like that. Like, ‘Why is he talking to us, we’re freshmen.’ But once you’re on the team, you’re friends with everybody.”